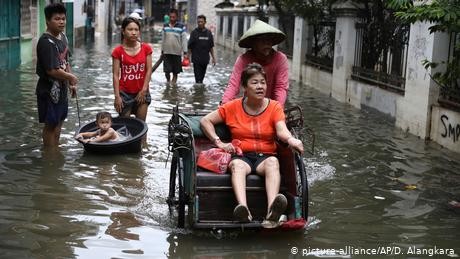 Indonesians were warned to brace for more flooding after massive downpours on New Year's Eve triggered landslides and floods that have killed 66 people in Jakarta and its satellite cities.

The Jakarta area, which is home to around 30 million people, was submerged by floodwaters that forced thousands to fleeand find temporary shelter.

In Lebak, one of the hardest hit districts, floods killed at least nine people, including a seven-year-old boy, and swept away entire houses. Two people are still missing in the district on the western tip of Java Island.

"Five days after the floods, 66 people have died as of today," said Agus Wibowo, spokesman for the National Disaster Management Agency. More than 36,000 people have also been displaced, he added.

The agency has told locals to remain on high alert for more extreme flooding, and said that the rainfall seen this year has been the most severe on record since 1866. About 377 millimeters (14.8 inches) of rain hit the city, with waters reaching to the second floors of buildings after rivers overflowed.