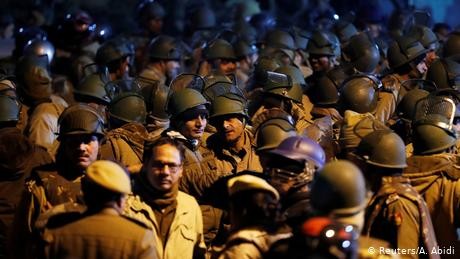 India is bracing for another day of protests, following violent clashes at a prestigious university in New Delhi, which left more than 20 people injured.

Late Sunday, masked assailants beat students and teachers with rods and bricks, at the capital's Jawaharlal Nehru University (JNU), in an assault that opposition lawmakers say is linked to the government.

Videos of the attack showed people in masks assaulting students that were protesting against a fee hike. Students at other universities across the country continued to protest not just the fee hike, but also the assault at JNU.

Read more: Indian state shuts down internet ahead of protests

Students at the Film and Television Institute of India in Pune staged a demonstration against the violence at the university at midnight on Sunday, according to the English-language Times of India. Student organizers are planning to continue demonstrations through Monday.

A member of a local youth organisation, Yuvak Kranti Dal, told the Times that they were also planning protests outside the district collectorate and another university in the region.

Uncertainty over the assault

Sitaram Yechury, general secretary of the Communist Party of India, said the attack was a "collusion" between the JNU administration and "goons" of the Modi-linked party.

Modi's BJP, however, denounced the attacks in a tweet. "This is a desperate attempt by forces of anarchy, who are determined to use students as cannon fodder, (to) create unrest to shore up their shrinking political footprint. Universities should remain places of learning and education," the party said.

Many students and organizers at JNU have protested Modi's policies in recent years. Protests against the fee hike, which students said would make education unaffordable, kicked off in November.