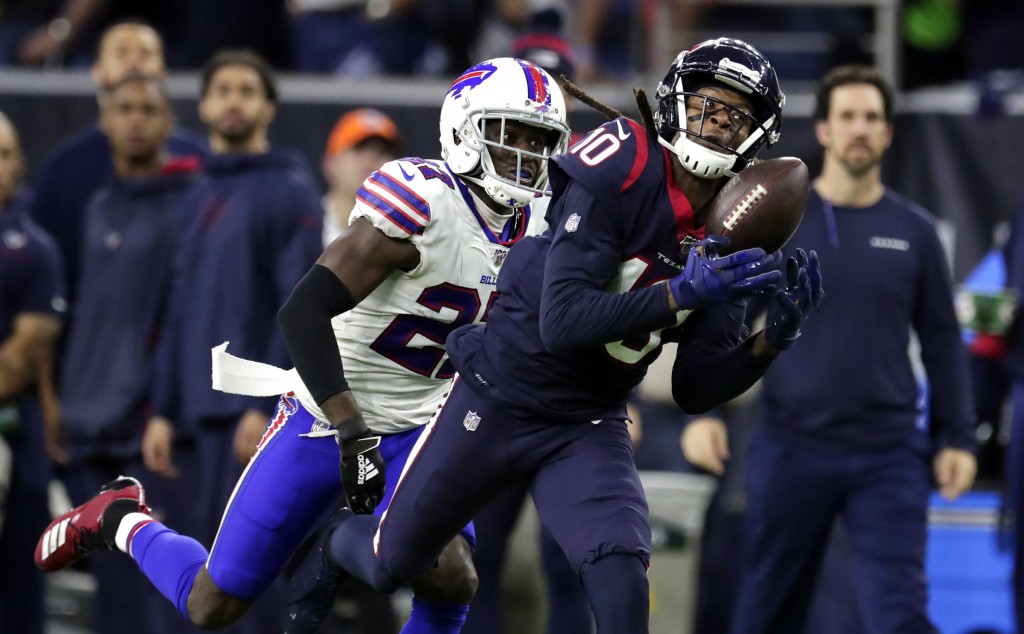 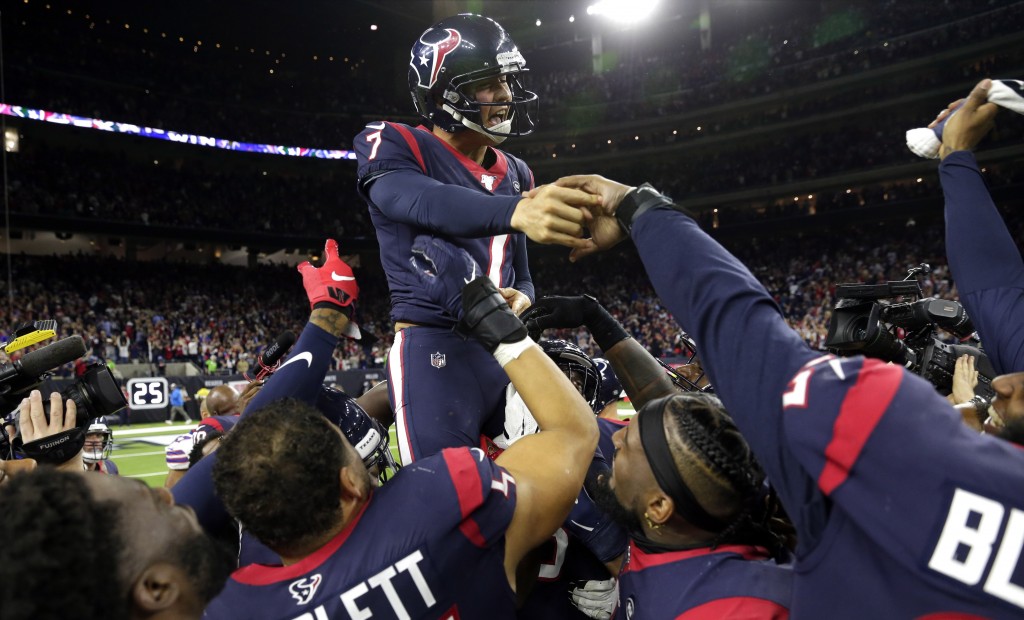 Tennessee at Baltimore, 8:15 p.m. EST. Derrick Henry ran for 182 yards to help the Titans (10-7) run past Tom Brady and the defending Super Bowl champion Patriots. Next, they'll take on Lamar Jackson and the Ravens (14-2), the AFC's top seed who enter the playoffs on a 12-game winning streak.

— Deshaun Watson, Texans, threw for a touchdown, ran for another and spun out of a would-be sack and coolly completed a pass that set up the winning field goal in overtime as Houston rallied from a double-digit second-half deficit for a 22-19 victory over the Buffalo Bills on Saturday.

— Kirk Cousins, Vikings, hit tight end Kyle Rudolph with a 4-yard fade on third-and-goal in overtime, lifting Minnesota to a 26-20 win at New Orleans on Sunday.

— Derrick Henry, Titans, ran for 182 yards and a touchdown to lead Tennessee to a 20-13 victory over New England on Saturday night.

— Dalvin Cook, Vikings, had two touchdown runs and finished with 94 yards on 28 carries in Minnesota's 26-20 win at New Orleans on Sunday.

— Ka'imi Fairbairn, Texans, kicked a 28-yard field goal in overtime to give Houston a 22-19 win over Buffalo on Saturday.

— Brett Kern, Titans, booted a 58-yard punt that took up 10 of the final 25 seconds and rolled down at the New England 1 to help finish off the Patriots in Tennessee's 20-13 victory Saturday night.

— Logan Ryan, Titans, returned an interception of Tom Brady 9 yards for a touchdown to seal a 20-13 win at New England on Saturday night.

— Everson Griffen and Danielle Hunter, Vikings. Griffen and Hunter each had 1 1/2 sacks as Minnesota's defensive front forced Drew Brees into two turnovers in a 26-20 overtime win at New Orleans, one game after the Saints had finished the regular season with an NFL record-low eight.

— Jerry Hughes and Trent Murphy, Bills. Hughes had three sacks and Brown two in Buffalo's 22-19 loss to Houston on Saturday.

New Orleans backup quarterback Taysom Hill became the first player in NFL history with at least 50 yards passing, 50 yards rushing and 25 yards receiving yards in a playoff game, accomplishing the feat in the Saints' 26-20 overtime loss to Minnesota on Sunday. Hill threw a 50-yard pass, ran four times for 50 yards and had two receptions for 25 yards and a TD. ... Tennessee tight end Anthony Firkser became the first player from Harvard to score a touchdown in the playoffs in NFL history, getting one in the Titans' 20-13 win at New England on Saturday night.

Derrick Henry's 444 yards from scrimmage are second in the Super Bowl era for a player in their first three career playoff games. Only Arian Foster (510) had more. ... Tennessee's 71 yards passing in a 20-13 win at New England on Saturday night were the fewest in a playoff win since the 2009 Ravens had 34 against the Patriots in the wild-card round in 2009 — also the previous time the Patriots played on the opening weekend. ... Buffalo's Josh Allen had 92 yards rushing and Houston's Deshaun Watson had 55, marking the first time since 1950 that opposing quarterbacks led their respective teams in rushing in a playoff game.

Tom Brady completed 20 of 37 passes for 209 yards with no touchdowns and a game-clinching interception that was returned for a touchdown in New England's 20-13 loss to Tennessee on Saturday night. It ended Brady's 20th NFL season and prompted speculation as to whether that was the last time the six-time Super Bowl champion will play for the Patriots. Brady, who will be 43 next season, said it's “pretty unlikely" he'll retire. That puts owner Robert Kraft and coach Bill Belichick on the clock to either re-sign him or watch the franchise's greatest player suit up somewhere else. Brady has said he wants to play until he is 45, he is coming off perhaps the worst (non-injury) season of his career.

Tennessee's Derrick Henry celebrated his 26th birthday by getting the most rushing yards against a Bill Belichick-coached Patriots team in the playoffs, running for 182 with a touchdown in a 20-13 victory Saturday night. Henry set an early tone by rushing for 49 of the Titans' 75 yards on their opening touchdown drive. On the Titans' second 75-yard TD march, all Henry did was gain every yard: 22 on a screen pass and 53 rushing, including a 1-yard dive into the end zone for a 14-13 halftime lead. Henry led the NFL in rushing this season with 1,540 yards in 15 games, the fourth-most rushing yards in franchise history. He also ran for 16 TDs, second most in team history.

Houston's 22-19 victory over Buffalo on Saturday marked the first wild-card overtime game since the Tim Tebow-led Denver Broncos beat the Pittsburgh Steelers 29-23 in the 2011 season. Minnesota needed extra time Sunday to beat New Orleans 26-20, just the third wild-card to go to OT in the NFC. It also is the first time two wild-card games went to overtime in same year.

Houston's 22-19 win over Buffalo on Saturday was the Texans' first playoff victory since the 2016 season and extended the Bills' postseason losing streak to six games, with their most recent playoff win coming in 1995. The game also conjured memories of another huge comeback in a wild-card game. The last time teams from Houston and Buffalo met in the playoffs, it was in a game that is known as “The Comeback.” The Bills set an NFL record for the largest comeback in NFL history by rallying from a 32-point deficit for a 41-38 overtime win against the Houston Oilers in a wild-card game in 1993. This time, Josh Allen and the Bills used a dominant first half to build a 13-point lead and were up 16-0 in the third quarter, before Allen began to struggle and the Texans stormed back.

Houston's J.J. Watt had a sack Saturday in his first game after sitting out since October with a torn pectoral muscle. Watt was pleasantly surprised with how good he felt on Saturday in his return from injury. But there was one moment where he was a bit worried that his surgically repaired pectoral muscle wouldn’t hold up. As he was about to dive to try and grab Bills quarterback Josh Allen, he wondered if that could be the moment where he was re-injured. “But I dove and landed right on it, popped up, checked it out and looked over at the doctor who was standing like 10 feet away,” he said. “And I was like: ‘It’s all right.’”

Minnesota tight end Tyler Conklin was carted from the sideline to the locker room in the first half of the Vikings' 26-20 win at New Orleans on Sunday. ... Saints linebacker Kiko Alonso limped off the field with what the Saints said was a knee injury in the second quarter and did not return. ... Tennessee linebacker Jayon Brown hurt a shoulder in the first half of the Titans' 20-13 win at New England on Saturday night. ... Patriots safety Patrick Chung left in the first quarter with an ankle issue.

“I would say it's pretty unlikely, hopefully unlikely.” — New England quarterback Tom Brady on whether he might retire after his 20th NFL season ended with a 20-13 loss to Tennessee on Saturday night.

“The play he made at the end of the game — nobody makes that play. The guy’s unbelievable. I’m very thankful and lucky to have him as my quarterback. That’s why you play the whole game.” — Houston's J.J. Watt on teammate Deshaun Watson, who made an athletic play to set up the winning play in the Texans' 22-19 win over Buffalo on Saturday night.