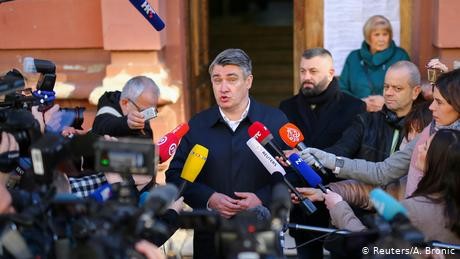 After 54% of the votes were counted, the Social Democrats' Milanovic won 54% of the vote, a larger margin than expected, while Grabar-Kitarovic of the ruling Croatian Democratic Union (HDZ) won 46% of votes.

"Thank you! Thanks to all volunteers, all of you who were my support over these six months. Thank you, people," Milanovic wrote to his followers on Facebook.

The crowd at Milanovic's campaign headquarters began to celebrate as soon as the exit polls were published. Grabar-Kitarovic's headquarters remained quiet, the state broadcaster reported.

Grabar-Kitarovic lost a huge lead in opinion polls over the past 6 months, and the party has followed a similar trend. Conversely, the SDP rose in popularity alongside Milanovic.

The two parties have dominated the political landscape since Croatia split from former Yugoslavia in 1991, and are both striving for the upper hand in parliamentary elections in December.

The presidential role is largely ceremonial. The head of state is unable to veto laws, but does have a say on foreign policy, defense and security matters.

Opinion polls ahead of the election had projected Milanovic's triumph with a smaller margin.

The next president's five-year term will begin in February.