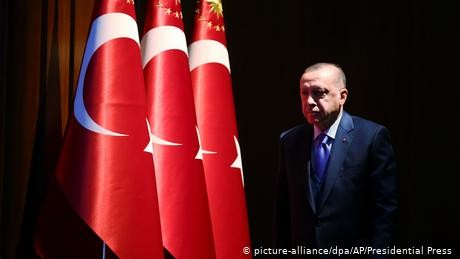 When Recep Tayyip Erdogan took power as Turkey's prime minister in 2003, he was hailed as a liberal reformer intent on bringing the country closer to Europe. But even then, some critics called Erdogan a wolf in sheep's clothing and someone who was pretending to be a democrat out of expediency alone.

It turns out they were right. After getting rid of his secular rivals in the military and judiciary, Erdogan proceeded to dismantle Turkish democracy in his bid to become something of a modern-day sultan on the old Ottoman model.

Turning back the clocks

In recent years, Erdogan cleverly overcame all obstacles in his path. He persevered, despite the Gezi Park protests, a corruption scandal and even a 2016 coup attempt. Then, two years later, he transformed Turkey's parliamentary system into a presidential one affording special powers to himself, the leader. Turkey had effectively become a one-man regime.

Today, Erdogan resides in a newly built 1,000-room palace in the Turkish capital, Ankara, akin to an Ottoman sultan. But now, it looks as if his hold on power is slipping just as he seems about to fully realize his dream.

Erdogan's power started waning in the summer of 2018, when the mismanagement of the economy began to become evident. Erdogan had focused on expanding the country's building sector, continuing to foster a system of nepotism. Today, as a result, the economy lacks productivity and finds itself mired in a serious crisis. Unemployment, especially among young people, is at record levels. And with the costs for fruits and vegetables skyrocketing, average Turks grew frustrated.

Then, at the local elections in March 2019, Erdogan suffered a serious setback when many of the country's major cities, including Turkey's economic powerhouse Istanbul, went to the opposition. The latter result dealt a particularly heavy blow to Erdogan, who had counted on getting access to Istanbul's brimming state coffers to help him cement his power.

The battle for Istanbul

Desperate to hold onto Istanbul, Erdogan pressured the Supreme Electoral Council of Turkey into a re-run of the city's local elections. Yet again, the opposition triumphed, propelling political shooting star Ekrem Imamoglu onto the stage.

Imamoglu kept his calms and countered the hate directed at him by the ruling party with friendliness. He beat rival Binali Yildirim from Erdogan's AKP party by a wide margin to become Istanbul's new Social Democratic mayor. And now, highly popular Imamoglu is even considered by some as a hot contender for the presidency.

Erdogan's stinging electoral defeat also resulted from the polarization of society that he himself has fostered. Now, a diverse range of opposition parties – including the Islamists, nationalists, Social Democrats and left-wing liberals – have overcome their differences to join forces against Erdogan.

And the president is slowly losing support among his own party members, too. About 1 million AKP members have left Erodgan's party over the past year. Not only that. Former allies like ex-Prime Minister Ahmet Davutoglu, former Finance Minister Ali Babacan and ex-President Abdullah Gül have left and founded parties of their own, which will eat into Erodgan's conservative electoral base.

Erdogan has been in power for 16 years. In this time, he has deployed his resilience and strong will to turn himself into a highly powerful modern-day sultan. But since 2019, his power has suddenly come under threat.

In 2023, Turks will celebrate the 100th anniversary of the foundation of modern Turkey – and thus the abolition of the Ottoman sultanate.