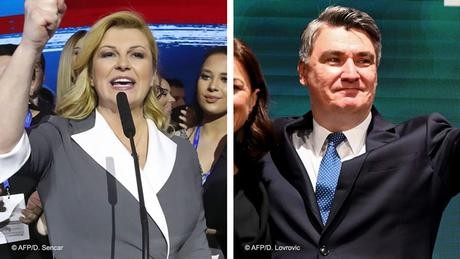 Voters in Croatia took to the polls for their choice between two familiar figures as they voted for a new president on Sunday, in what pollsters expect to be a close race.

Read more: Croatia's EU presidency: What will it bring for Europe?

A survey published by the daily newspaper 24Sata, published on Wednesday predicted a tight race, giving Milanovic a 40-to-39 % edge. An estimated 21% of those surveyed were still undecided.

Should Grabar-Kitarovic fail to win the presidency, it would deal a blow to the HDZ, whose moderate Prime Minister Andrej Plenkovic faces parliamentary elections later this year.

The question of a 'real Croatia'

The battle appears to have pitted city against countryside, with Grabar-Kitarovic — who once joked that she was one of few politicians who knows how to milk a cow — campaigning on the ticket of a "real Croatia." She is seeking to win back hardliners who backed nationalist folk singer Skoro with nearly a quarter of all votes in the first round.

"I am a Croatia that unifies," Grabar-Kitarovic said during a TV election debate with her rival, before alluding to the country's fight for independence from the former Yugoslavia.

Read more: Neo-fascism on the rise in Croatia, Council of Europe finds

Dominating the polling in cities, Milanovic finished the first round with the most votes — around a third, thanks in part to the right-wing split. He has claimed there is "no 'real Croatia'... rather a Croatian republic for all, equal citizens."

Some 3.8 million people are eligible to vote in the election, which is being held just days after Croatia took over the rotating presidency of the European Union for a six-month period.

Grabar-Kitrovic, raised in the country's rural northwest, styles herself as a "woman of the people." The 51-year-old candidate of the HDZ took office in February 2015, to become the country's first female president. She was previously foreign minister, an ambassador and the assistant secretary-general of NATO.

Most controversially, she is accused of downplaying the crimes of the country's pro-Nazi World War II regime — the Ustasha.

The 53-year-old Milanovic, who became prime minister in 2011, is modeling himself as a "president with character” an allusion to his reputation for stubbornness. When he came to office as leader of the Social Democratic Party (SDP), he was widely perceived as a promising young politician, free of corruption. However, the party failed to deliver promised reforms against political patronage, and it lost power in 2016.

Milanovic has insisted that the "wars are over" and he says Croatia should now fight for its place in Europe. Self-described as having a "leftist heart and conservative head,” he has been criticized for a standoffish attitude towards the media and his rivals.