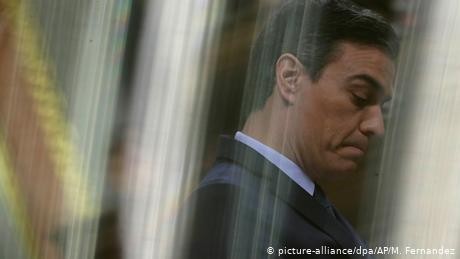 Spain's interim prime minister, Pedro Sanchez, failed on Sunday to win the support of the country's parliament to form a left-wing coalition government.

Sanchez fell ten short of the 176 votes needed to secure an absolute majority in the 350-seat assembly, receiving just 166 in favor, 165 against and 18 abstentions. One lawmaker did not attend the vote.

Sanchez will have a second chance on Tuesday, when the bar for success will be lowered to a simple majority, and will only need more votes in favor of his reelection than against.

Spain has been without a proper government for most of the past year after two inconclusive elections in April and November.

He struck a deal with hard-left party Podemos, which won 35 seats, to form what would be the first post-dictatorship coalition government in Spain.

The two parties' combined total of 155 seats, however, still fell short of a majority, prompting Sanchez to reach out and secure the support or abstention of several smaller regional parties, including the Catalan separatist party Esquerra Republicana de Cataluny (ERC).

In a sign of how close Tuesday's race could be, a member from regional party Coalicion Canaria, Ana Oramas, voted against Sanchez instead of abstaining as her party had agreed.