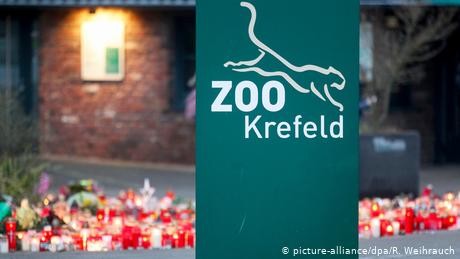 The Environment Minister for the German region of North Rhine-Westphalia said Saturday that the seller of the sky lanterns that caused the fire at Krefeld Zoo has a moral responsibility for killing more than 30 animals.

The lanterns are not allowed to be sold in Germany, though online purchases are possible.

"What is important is why such dangerous objects like sky lanterns can be marketed so easily," Ursula Heinen-Esser (CDU) told newspaper the Rheinische Post. She added: "It seems to me that the commercial enterprise, at least morally, is jointly responsible."

The politician rejected the notion that animal welfare standards for zoos are not stringent enough.

"I have the impression that the zoos in North Rhine-Westphalia are very well managed," said Heinen-Esser. "The employees are all animal lovers who are very committed to animals and their welfare."

Three people own up

The zoo's monkey house burned down on New Year's Eve, resulting in the deaths of more than 30 animals, including great apes. Police and prosecutors believe the fire was caused by sky lanterns.

Three women , a woman and her two daughters, have come forward to police for questioning.

In a press conference on Thursday, police said the fire broke out when the trio released five paper lanterns marked with New Year's wishes into the night sky.

The family was unaware that a 2009 ban on the decorations also applied to New Year's festivities, police said. The family promptly handed themselves in to the authorities, who confirmed the individuals are being investigated for negligent arson. If found guilty, the women face up to five years in prison.