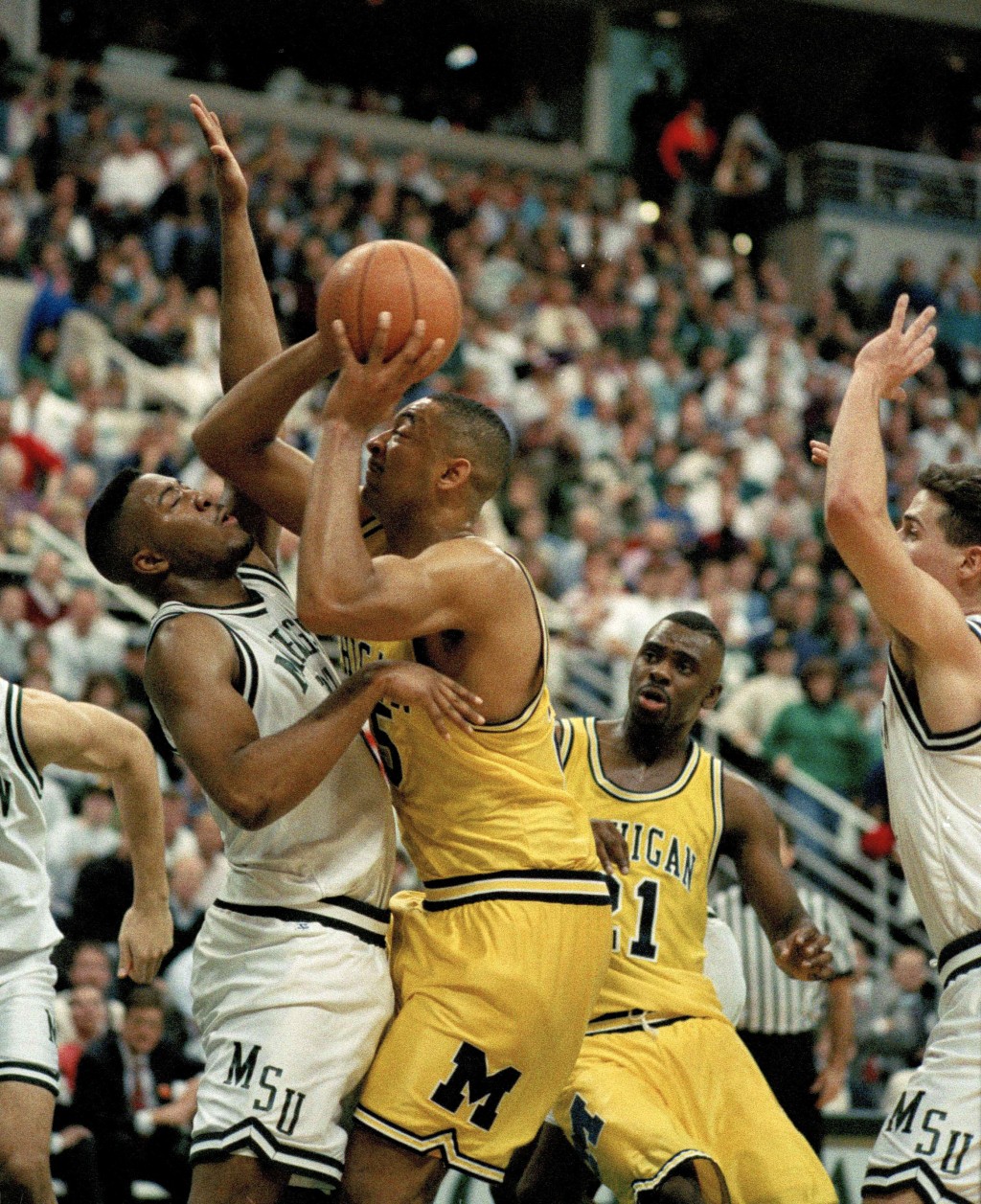 It won't be his first experience in the highly charged series.

The former Fab Five star helped the Wolverines go 5-1 against the Spartans over three seasons before he entered the 1994 NBA draft, starting his 19-season professional playing career.

“You know what’s going to help us on Sunday? I have one year left of eligibility,” Howard joked. “The No. 25 jersey is coming out of retirement.”

Isaiah Livers was out of the Wolverines' lineup in their previous game, taking away the team's second-leading scorer and top 3-point shooter. Howard said Livers is day to day, staying coy about the junior forward's status for the game. That leaves coach Tom Izzo and his staff guessing about whether to prepare for Livers to play.

Howard was hired in May when John Beilein, Michigan's winningest coach, ended his 12-season stay at the school to lead the Cleveland Cavaliers.

Five months later, Howard made an effort to connect with Izzo at the Big Ten’s annual basketball media day.

“I went out to him and found him so I could share with him that I did a poor job of contacting him and just welcoming myself to the Big Ten and to this area because I don’t fear anyone,” he said. “I’ve always said that, but I do respect people and coach Tom Izzo has done a lot of great things for college basketball.”

Izzo had a friendly relationship with Beilein, but he doesn't know Howard much yet. Izzo, though, knows the former Wolverines forward is well aware of what to expect when the series is renewed.

“He knows the rivalry,” Izzo said. “He's been here before.”

Here are some other things to watch when Michigan and Michigan State meet for the first time this season:

Michigan State's Cassius Winston and Michigan's Zavier Simpson will likely shadow each other in a duel of senior point guards.

“There’s a different focus from both teams," Winston said following a 20-point win over Illinois on Thursday night. "Everyone’s locked in. You never catch anyone off-guard.”

Winston is averaging nearly 18 points and six-plus assists. He is closing in on the Big Ten career record for assists set by Michigan State's national championship-winning point guard Mateen Cleaves in 2000. Winston is 24 assists from passing Cleaves' mark of 816.

Simpson looks to pass much more than shoot and is averaging 8.9 assists to trail only Samford's Josh Sharkey in the nation. With 547 career assists, he is 28 assists from moving past national championship-winning point guard Rumeal Robinson for second on the school's all-time list and has a shot to pass Gary Grant's record of 731 set three-plus decades ago.

The 6-8 Tillman is averaging 13.5 points, a team-high 9.7 rebounds and nearly three assists along with 23 blocks and 13 steals.

Michigan State beat Michigan three times last season, including a win that sealed a share of the Big Ten title in the regular season and in the Big Ten Tournament championship

“They had our number last year,” Teske acknowledged. “They deserved to win all three of those games, but it’s a new year.”

Michigan won its first seven games and was ranked No. 4 a month ago, matching the biggest jump after being unranked in the history of the poll, before losing three of its last six games.

The winner might be able to move up among the top 10 in poll.