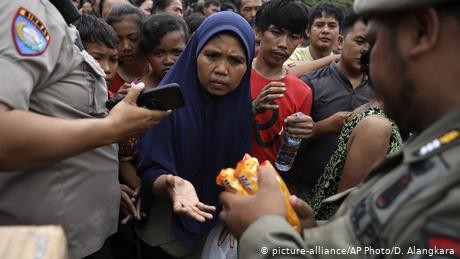 Indonesian rescue teams flew aid to remote districts around Jakarta on Saturday — as the government announced that the death toll had risen to at least 53.

National Disaster Mitigation Agency spokesman Agus Wibowo said the fatalities included those who had drowned or been electrocuted.

Tens of thousands of people in the capital were unable to return to their homes, with fears growing about the possibility of more heavy rainfall. More than 170,000 people sought refuge in shelters across Jakarta's massive urban conglomeration, after whole neighborhoods were submerged.

Further south, in the Lebak municipality, police and military personnel dropped boxes of noodles and other supplies by helicopter into isolated districts. Many areas have been made inaccessible by road after bridges were destroyed.

"It's tough to get supplies in there," police chief Tomsi Tohir told the AFP news agency. "There are about a dozen places hit by landslides."

The government on Friday said it would begin cloud seeding — inducing rain by using chemicals sprayed from planes — to the west of Jakarta. It was hoped this would prevent approaching rainfall from exacerbating the situation by making it fall earlier before reaching the capital region.

Jakarta's numerous infrastructure shortcomings, including bad drainage and runaway overdevelopment, are thought to have worsened the situation in the capital itself.

Indonesian President Joko Widodo announced in August a plan to move the country's capital to Borneo, an idea that some environmentalists fear will exacerbate deforestation.