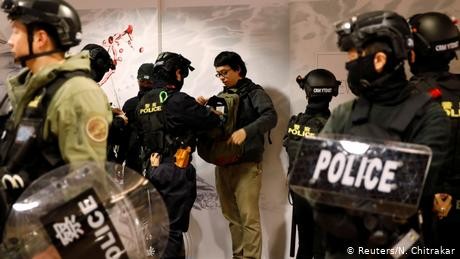 China replaced its top envoy to Hong Kong, Wang Zhimin, on Saturday, according to state-run media.

"Wang Zhimin has been dismissed from his position as head of the Liaison Office" for Hong Kong affairs and was replaced by Luo Huining, state broadcaster CCTV said, without giving further details.

Wang, 62, headed the Liaison Office of the Central People's Government in Hong Kong, a Chinese government body, housed in a heavily-guarded Hong Kong skyscraper, through which official communications between the semi-autonomous city and China are conducted.

The office has come under criticism in Hong Kong for being isolated and out of touch with the situation following months of protests in the city.

"The Liaison Office has been mingling with the rich people and mainland elites in the city and isolated itself from the people," a Chinese official had said in November. "This needs to be changed."

Wang, who had been director of the liaison office is will be replaced by 65-year-old Luo Huining, according to the official website of China's Ministry of Human Resources and Social Security.

Luo was also made deputy head of the National People's Congress Financial and Economic Affairs Committee, according to Hong Kong public broadcaster RTHK.

Luo had been semi-retired after serving as secretary of the Shanxi Provincial Committee of the Communist Party of China.

No end in sight

For months, protesters have taken to the streets of Hong Kong, disrupting commercial activity, establishing road blocks and occupying official buildings. What started as opposition to an extradition bill in June has since evolved into a movement calling for more democratic rights and further autonomy from mainland China.

Hong Kong Chief Executive Carrie Lam has been a focal point of the demonstrations, with activists calling on her to step down and for authorities to investigate what they describe as widespread police brutality during crowd dispersal operations.

Although initial demonstrations remained peaceful, the protests have now become more violent due to clashes with police.