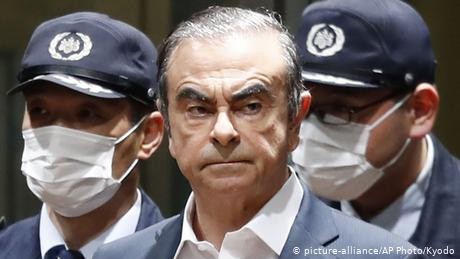 Carlos Ghosn escaped Japan using charter flights from Tokyo to Istanbul then finally Beirut with the assistance of an airline employee who falsified records.

MNG Jet said an employee admitted to falsifying the records and excluding his name from the documents. The employee also confirmed he "acted in his individual capacity" in helping Ghosn.

MNG said it had leased two jets to two different clients in agreements that "were seemingly not connected to each other," with one plane flying from Osaka to Istanbul and the other from Istanbul to Beirut.

"The name of Mr Ghosn did not appear in the official documentation of any of the flights," MNG Jet said in a statement. "After having learnt through the media that the leasing was benefiting Mr Ghosn and not the officially declared passengers, MNG Jet launched an internal inquiry and filed a criminal complaint in Turkey," the company said.

The private jet operator had filed a criminal complaint a day after Turkish police detained seven people including four pilots, two airport ground staff and one cargo worker as part of a probe into Ghosn's journey through Istanbul.

The detainees were sent to court on Friday after giving statements to police, Reuters reported. The court ruled to arrest five of the suspects and release the other two suspects from custody, according to Turkish news agency Anadolu.

The Wall Street Journal, citing sources familiar with Turkey's investigation into the escape, reported on Friday that Ghosn fled Japan aboard a private jet hidden in a big black case normally used to carry audio equipment. The newspaper added that he was accompanied by two men with names matching those of American security contractors.

Turkish interior ministry spokesman Ismail Catakli told reporters on Friday that Ghosn might have been transferred through the cargo section of the airport but did not give further information.

The ex-Nissan CEO became an international fugitive after he skipped bail and escaped to Lebanon to avoid what he called a "rigged" justice system in Japan.

Lebanon received an Interpol arrest warrant for Ghosn on Thursday.

The Lebanese government had denied claims on Thursday that President Michel Aoun had personally welcomed Ghosn on his arrival in the country.

A Lebanese official said Friday that Ghosn is due to be summoned by Lebanon's public prosecutor next week. Lebanese authorities, however, have said Ghosn had entered the country legally and that Lebanon had no extradition agreement with Japan.

"The Lebanese judiciary is obliged to hear him. But it can still decide whether to arrest him or let him remain free," the official said, adding that Ghosn could be heard on January 7 or 8.

The French government has also said it would not extradite Ghosn if he arrived in France as the country does not extradite its own citizens.

Ghosn has announced that he will speak to the press on January 8 about his escape.