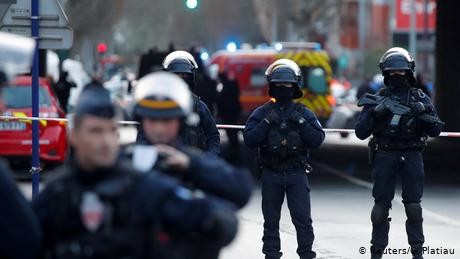 A man stabbed and killed one person and injured two others in a knife attack on the outskirts of Paris on Friday before being shot dead by police.

The incident took place at around midday in a park in the Paris suburb of Villejiuf, Paris police confirmed.

Franck Le Bohellec, the commune's mayor, identified the person who died as a 56-year-old local who was walking in the park with his wife at the time of the incident.

The two injured victims were being treated at a local hospital, said Laure Beccuau, the prosecutor whose office is examining the incident. The attacker attempted to stab more people, but they were able to escape.

Attacker would have claimed more lives

After stabbing the victims in the park, the attacker headed towards a shopping center in the neighboring suburb of Hay-les-Roses, where he was shot and killed by police.

Officials praised the actions of police, saying it was likely the attacker would have claimed more victims.

"Luckily, the police were quickly alerted and made their way rapidly to the scene where they neutralized him by killing him," Hay-les-Roses Mayor Vincent Jeanbrun told French broadcaster BFMTV.

Laurent Nunez, the deputy interior minister, visited the scene and called the actions of the police "extremely courageous."

No details about the attacker have been given. Authorities have provided no motive for the attack, including whether there were terror motives behind the incident.