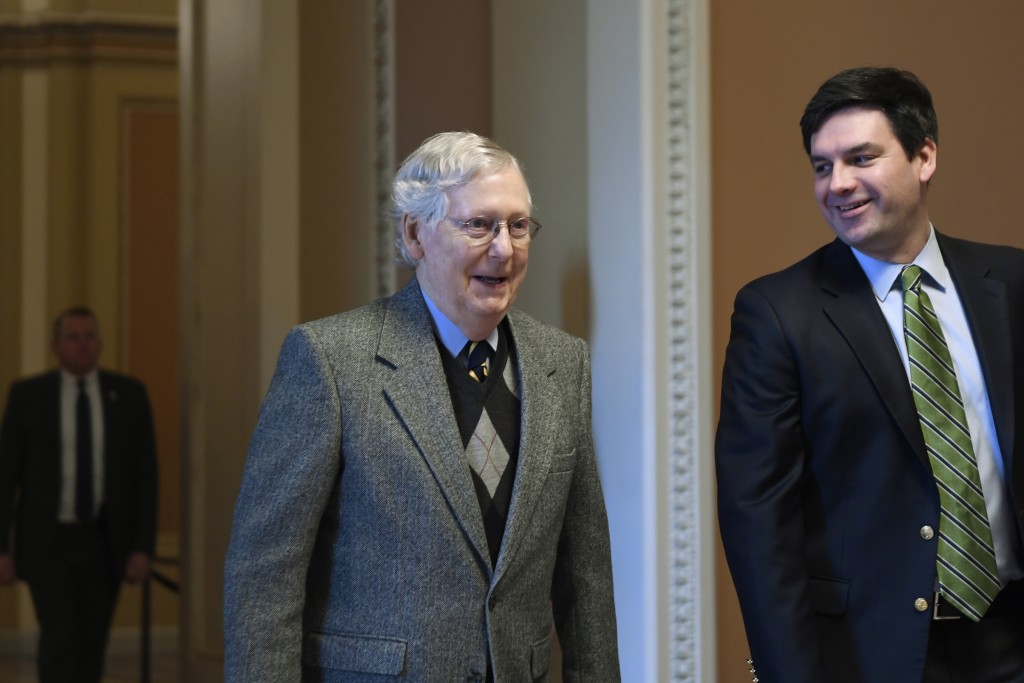 Congress opened for the new year Friday with President Donald Trump's impeachment trial deeply in flux and the crisis in the Middle East only adding to the uncertainty about how lawmakers will proceed.

Senate Majority Leader Mitch McConnell is set to deliver remarks as the Senate gavels into session. But Trump's Senate trial cannot begin until House Speaker Nancy Pelosi delivers the articles of impeachment, which she is refusing to do until the Republican leader provides details on whether Democrats will be able to call more witnesses. McConnell has said the trial should start and then senators can decide the scope.

The Constitution requires that the House and Senate convene on Jan. 3, but few lawmakers are in town for the perfunctory session. But the Senate leaders' remarks are being closely watched for signs of next steps amid the crisis in the Middle East after the U.S. killed a top Iranian general with airstrikes in Iraq.

McConnell is hoping for a speedy trial to acquit Trump of the charges, but Democrats believe their push to hear from additional witnesses was strengthened in the two weeks since the House voted to impeach Trump.

Trump, only the third president in U.S. history to be impeached, faces charges of abuse of power and obstruction of Congress over his actions toward Ukraine. The president wants not only acquittal in the trial but also vindication from his GOP allies.

Senate Minority Leader Chuck Schumer is pressing for at least four new witnesses, all of whom refused to appear in the House proceedings. They are Trump's former national security adviser John Bolton, acting chief of staff Mick Mulvaney and two other officials who were directly involved with Trump's decision to withhold nearly $400 million in in military aide for Ukraine, which the ally depends on to counter Russia, until President Volodymyr Zelenskiy agreed to publicly announce an investigation into Trump rival Joe Biden.

Democrats believe their demands for witnesses are bolstered by new reports about the withheld aid and unease among some GOP senator over the situation.

Two Republican senators, Lisa Murkowski and Susan Collins, indicated they were open to hearing from more witnesses and registered their concerns about McConnell's claim that he was working closely with the White House on the format for the trial.

But McConnell has showed few signs of changing course. He prefers to stick with his plan to follow the process used during Bill Clinton's impeachment, in which the trial was convened and then votes were taken to decide if additional witnesses were needed.