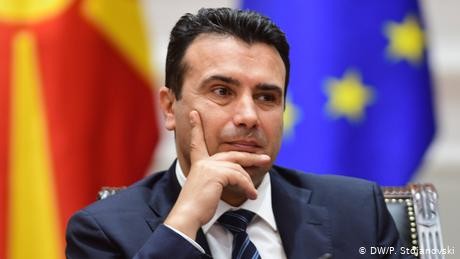 North Macedonia's prime minister, Zoran Zaev, handed in his resignation on Friday, with a caretaker Cabinet set to assume control in order to organize the country's elections, due to take place on April 12.

The Balkan nation is still reeling from the European Union's decision not to consider membership talks, as both North Macedonia and Albania were blocked by France, with support from the Netherlands and Denmark, in October last year. French President Emmanuel Macron said the accession process itself must first be reformed before accepting new members.

State of flux after EU snub

This prompted Zaev to call for April's snap elections. Joining the EU was a key goal of Zaev's administration. The decision not to begin the accession process left the 45-year-old, who assumed office in 2017, frustrated as he expressed his "disappointment and outrage."

Read more: EU's broken promises in the Balkans lead to rocky road in 2020

The snub from the bloc came despite the compromise Zaev agreed with Greece of changing the name of his country, adding the qualifier "North," appeasing Athens in the process.

Oliver Spasovski, North Macedonia's interior minister, has been nominated as caretaker prime minister in the wake of Zaev's resignation.