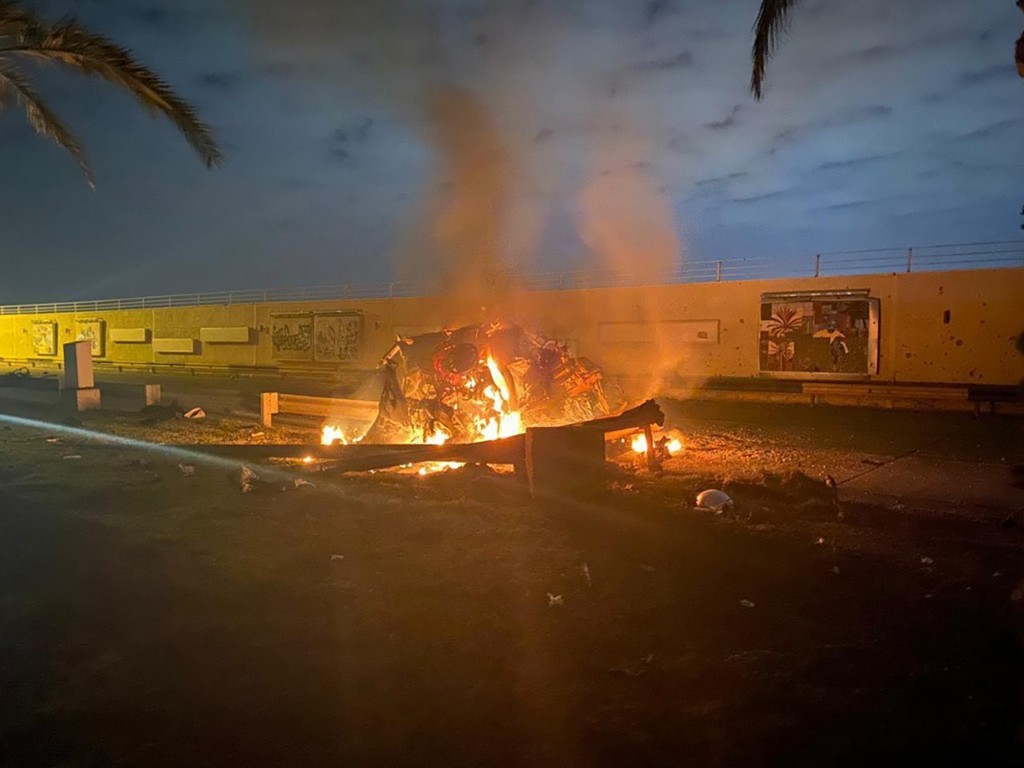 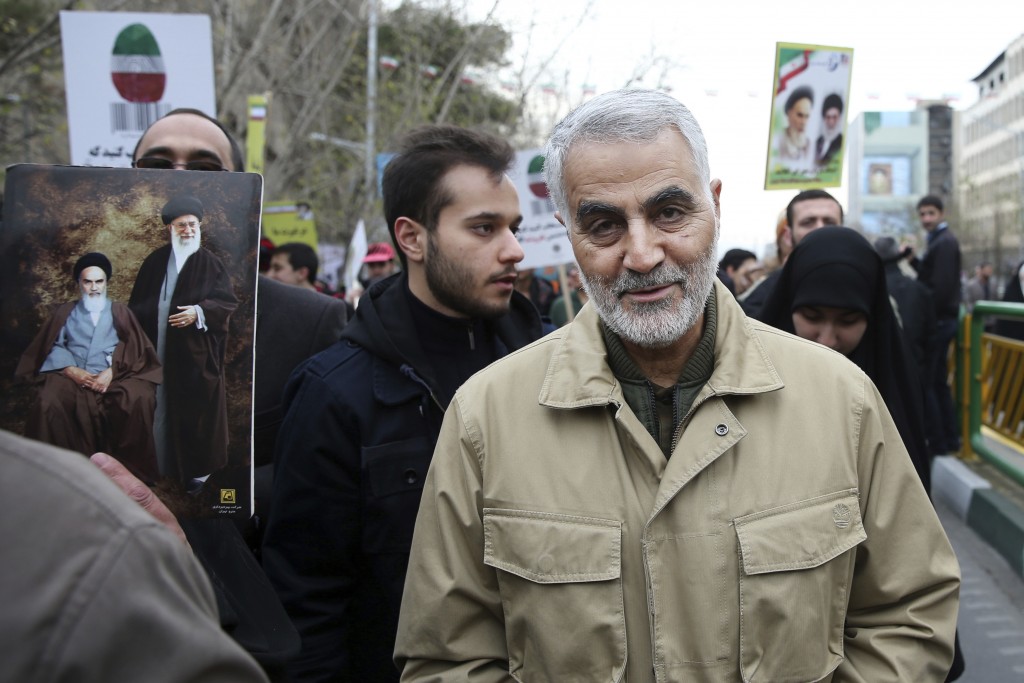 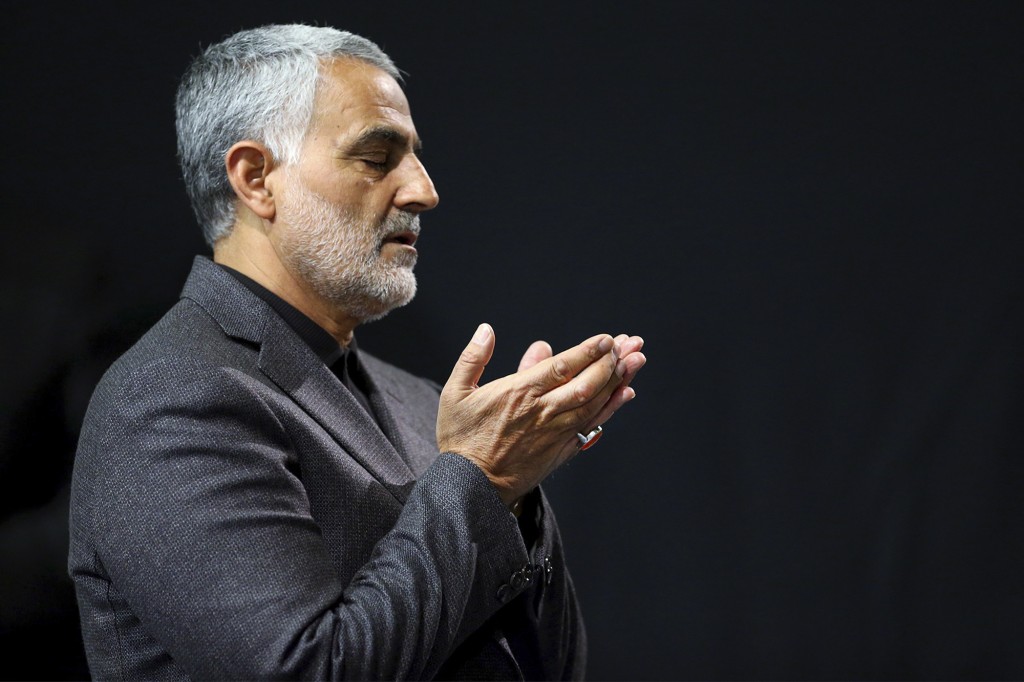 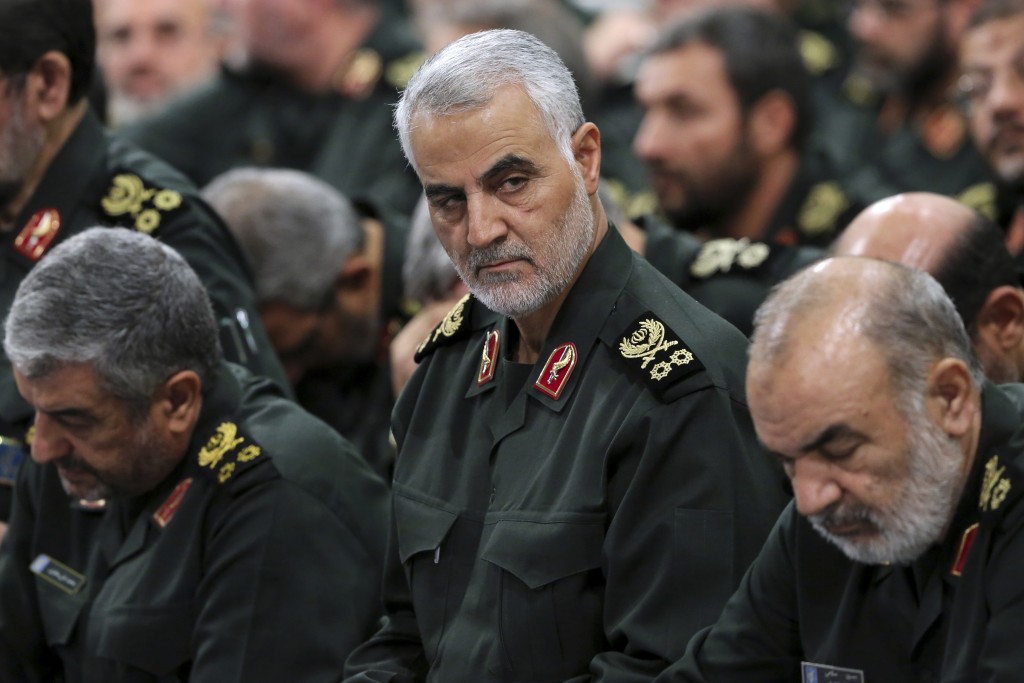 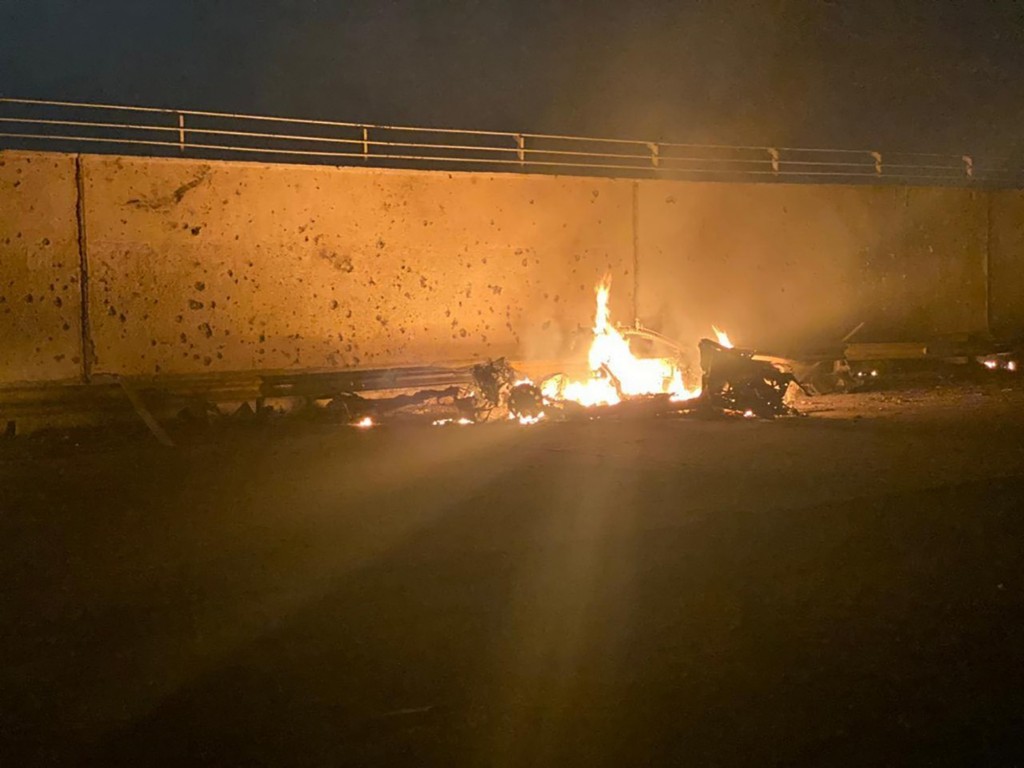 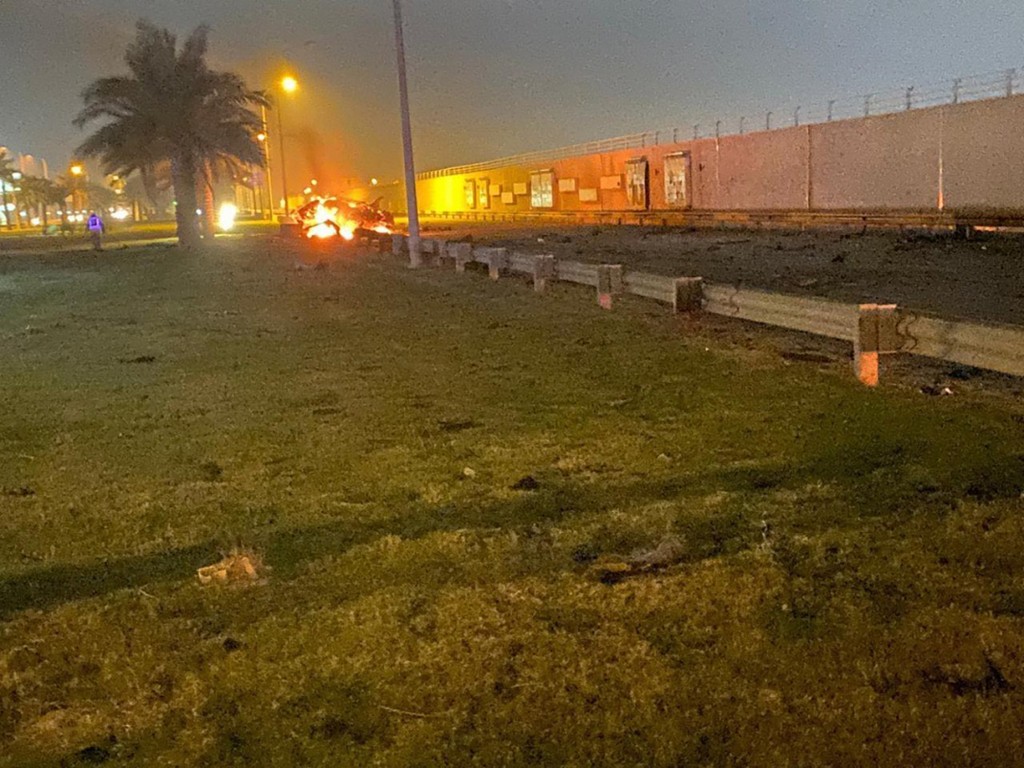 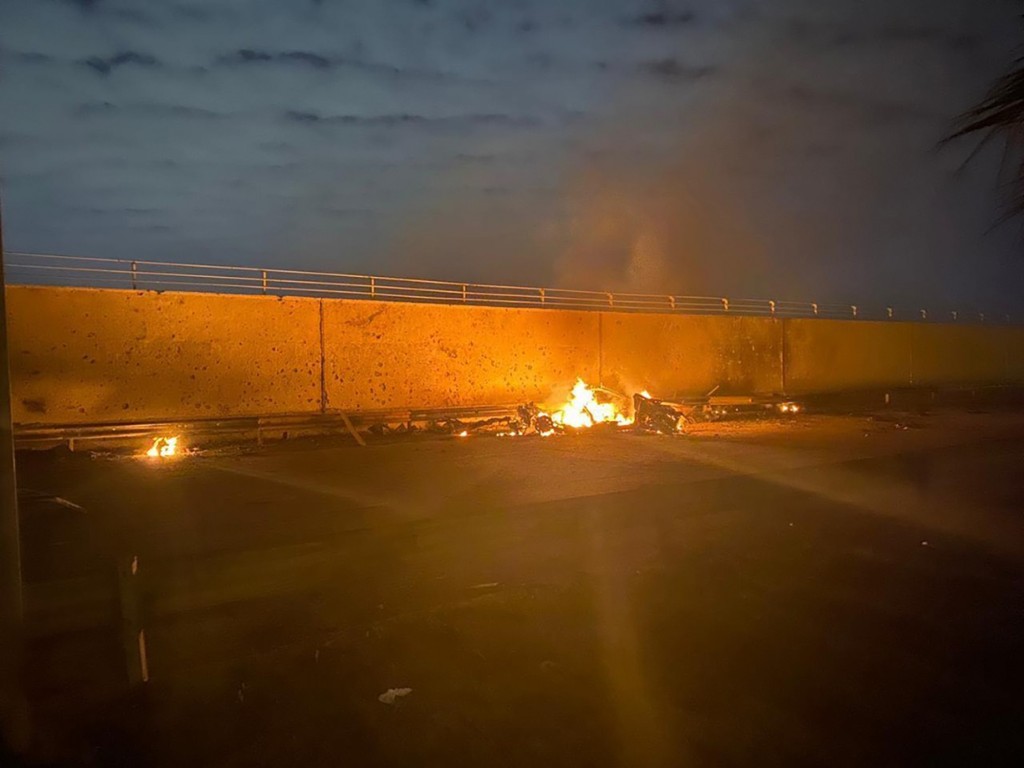 BAGHDAD (AP) — Iran has vowed “harsh retaliation” for a U.S. airstrike near Baghdad's airport that killed Iran's top general and the architect of its interventions across the Middle East, as tensions soared in the wake of the targeted killing.

The killing of Gen. Qassem Soleimani, the head of Iran's elite Quds Force, marks a major escalation in the standoff between Washington and Iran, which has careened from one crisis to another since President Donald Trump withdrew from the 2015 nuclear deal and imposed crippling sanctions.

Iran’s Supreme Leader Ayatollah Ali Khamenei warned that a “harsh retaliation is waiting” for the U.S. after the airstrike, calling Soleimani the “international face of resistance.” Khamenei declared three days of public mourning for the general’s death.

The killing, and any forceful retaliation by Iran, could ignite a conflict that engulfs the whole region, endangering U.S. troops in Iraq, Syria and beyond. Over the last two decades Soleimani had assembled a network of powerful and heavily armed allies stretching all the way to southern Lebanon, on Israel's doorstep.

The Defense Department said it killed Soleimani because he “was actively developing plans to attack American diplomats and service members in Iraq and throughout the region." It also accused Soleimani of approving the orchestrated violent protests at the U.S. Embassy in Baghdad earlier this week.

Iranian state television called Trump’s order to kill Soleimani “the biggest miscalculation by the U.S.” since World War II. “The people of the region will no longer allow Americans to stay," it said.

Trump was vacationing on his estate in Palm Beach, Florida, but sent out a tweet of an American flag.

The dramatic attack comes at the start of a year in which Trump faces both a Senate trial following his impeachment by the Congress and a re-election campaign. It marks a potential turning point in the Middle East and represents a drastic change for American policy toward Iran after months of tensions.

Tehran shot down a U.S. military surveillance drone and seized oil tankers last year. The U.S. also blames Iran for a series of other attacks targeting tankers, as well as a September assault on Saudi Arabia’s oil industry that temporarily halved its production.

The tensions are rooted in in Trump’s decision in May 2018 to withdraw the U.S. from Iran’s nuclear deal with world powers, struck under his predecessor, Barack Obama.

The 62-year-old Soleimani was the target of Friday's U.S. attack, which was conducted by an armed American drone, according to a U.S. official. His vehicle was struck on an access road near the Baghdad airport.

A senior Iraqi security official said the airstrike took place near the cargo area after Soleimani left his plane and joined al-Muhandis and others in a car. The official said the plane had arrived from either Lebanon or Syria.

PMF officials said the bodies of Suleimani and al-Muhandis were torn to pieces. A senior politician said Soleimani's body was identified by the ring he wore.

The officials spoke on condition of anonymity because they were not authorized to give statements to the media.

It’s unclear what legal authority the U.S. relied on to carry out the attack. American presidents claim broad authority to act without the approval of the Congress when U.S. personnel or interests are facing an imminent threat. The Pentagon did not provide evidence to back up its assertion that Soleimani was planning new attacks against Americans.

House Speaker Nancy Pelosi said the “highest priority” was to protect American lives and interests, but that “we cannot put the lives of American service members, diplomats and others further at risk by engaging in provocative and disproportionate actions.”

“Tonight’s airstrike risks provoking further dangerous escalation of violence. America – and the world – cannot afford to have tensions escalate to the point of no return,” she said in a statement. She said Congress was not consulted on the strike and demanded it be “immediately” briefed on the situation and the next steps.

Democratic presidential candidate Joe Biden said Trump had “tossed a stick of dynamite into a tinderbox," and like other Democratic White House hopefuls criticized Trump's order, saying it could leave the U.S. “on the brink of a major conflict across the Middle East."

But Trump allies were quick to praise the action. “To the Iranian government: if you want more, you will get more,” tweeted South Carolina Sen. Lindsey Graham.

For Iran, the killing represents the loss of a cultural icon who represented national pride and resilience while facing U.S. sanctions. While careful to avoid involving himself in politics, Soleimani’s profile rose sharply as U.S. and Israeli officials blamed him for Iranian proxy attacks abroad.

While Iran’s conventional military has suffered under 40 years of American sanctions, the Guard has built up a ballistic missile program. It also can strike asymmetrically in the region through forces like Lebanon’s Hezbollah and Yemen’s Houthi rebels. The U.S. long has blamed Iran for car bombings and kidnappings it never claimed.

As the head of the Quds, or Jersualem, Force of Iran’s paramilitary Revolutionary Guard, Soleimani led all of its expeditionary forces and frequently shuttled between Iraq, Lebanon and Syria. Quds Force members have deployed into Syria’s long war to support President Bashar Assad, as well as into Iraq in the wake of the 2003 U.S. invasion that toppled dictator Saddam Hussein, a longtime foe of Tehran.

Soleimani rose to even greater prominence by advising forces fighting the Islamic State group in Iraq and in Syria.

U.S. officials say the Guard under Soleimani taught Iraqi militants how to manufacture and use especially deadly roadside bombs against U.S. troops after the invasion of Iraq. Iran has denied that. Soleimani himself remains popular among many Iranians, who see him as a selfless hero fighting Iran’s enemies abroad.

Soleimani had been rumored dead several times, including in a 2006 airplane crash that killed other military officials in northwestern Iran and following a 2012 bombing in Damascus that killed top aides of Assad. Rumors circulated in November 2015 that Soleimani was killed or seriously wounded leading forces loyal to Assad as they fought around Syria’s Aleppo.

Soleimani's killing follows the New Year's Eve attack by Iran-backed militias on the U.S. Embassy in Baghdad. The two-day embassy attack, which ended Wednesday, prompted Trump to order about 750 U.S. troops deployed to the Middle East. No one was killed or wounded in the attack, which appeared to be mainly a show of force.

It prompted Secretary of State Mike Pompeo to postpone his trip to Ukraine and four other countries “to continue monitoring the ongoing situation in Iraq and ensure the safety and security of Americans in the Middle East,” the State Department said.

The breach at the embassy followed U.S. airstrikes Sunday that killed 25 fighters of Kataeb Hezbollah, an Iran-backed militia operating in Iraq and Syria. The U.S. military said the strikes were in retaliation for last week’s killing of an American contractor in a rocket attack on an Iraqi military base that the U.S. blamed on the militia.

U.S. officials have suggested they were prepared to engage in further retaliatory attacks in Iraq.