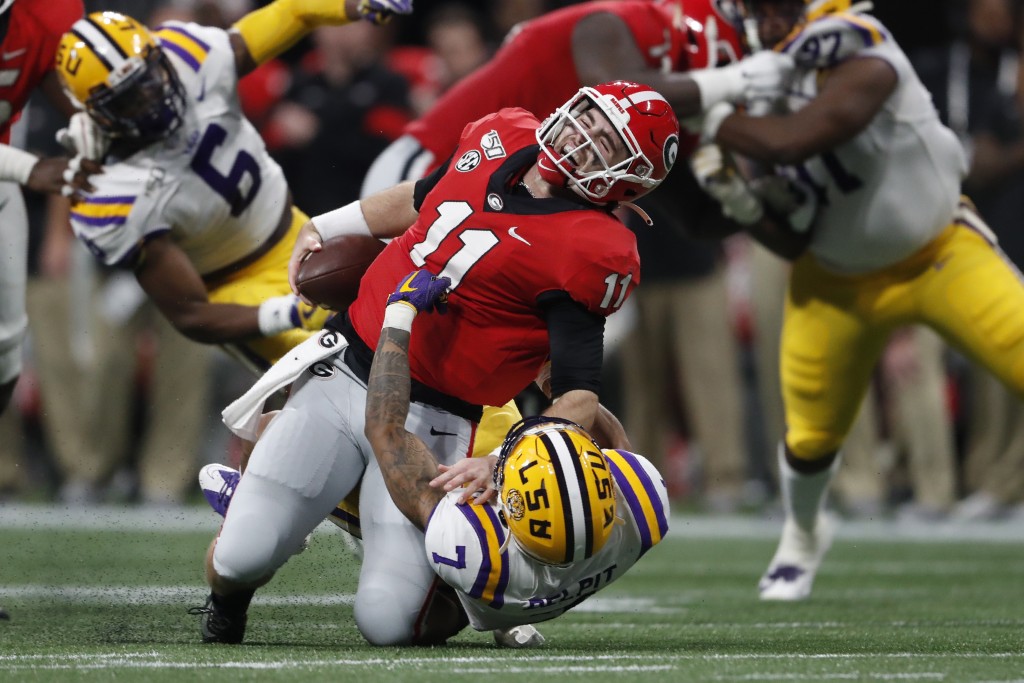 Grant Delpit has had an unusual season.

LSU's star safety switched positions early in the year to compensate for an injured teammate. Later in the season, he was the injured player and the Tigers' defense suffered from Delpit being limited by a sore ankle.

That didn't stop Delpit from winning the Thorpe Award as the nation's top defensive back or keep No. 1 LSU (14-0) from reaching the College Football Playoff with a perfect record.

In a case of fortuitous timing for the Tigers, Delpit heads into the national championship game against No. 3 Clemson (14-0) on Jan. 13 in New Orleans feeling healthy and playing about as well as he has all season. No coincidence, the same goes for LSU's defense across the board.

“He was being tough all year and battling through injuries, and he got healthy towards the end of the year, and that was kind of the turning point of our defense,” LSU quarterback Joe Burrow said Thursday. “I think that just shows how important he is."

Delpit's season took a turn after teammate Todd Harris was lost for the year with a right knee injury in the third game of the season against Northwestern State.

Harris had played free safety and Delpit was slotted as a strong safety. From that spot, the 6-foot-3, 205-pound junior wreaked havoc on offenses last year and stuffed the stat sheet. He had five interceptions, five sacks, 9.5 tackles for loss and 14 passes defended to become an AP All-American in 2018. He established himself as a possible future first-round pick in the NFL draft.

Without Harris, Delpit moved into the vacated role because he was best suited to be LSU's last line of defense. That put Delpit farther from the line of scrimmage, with fewer opportunities to blitz and run to the ball.

JaCoby Stevens has played Delpit's role this season. The junior has three interceptions, is second on the team in tackles with 85 and has five sacks among 8.5 tackles for loss.

“I'm all about the results of the team,” Delpit said. “So whatever position they put me, I'm going to play it. I was playing a lot of free safety this year in the middle of the field, and just trying to get other guys in position to make plays like JaCoby being down around the ball a lot.”

Delpit's season took another turn in late October when he sprained his ankle against Auburn.

He played through the injury in the Tigers' No. 1 vs. No. 2 showdown against Alabama, a game in which the Crimson Tide passed for 419 yards, and the next week when Mississippi ran for 402 yards.

Delpit took a week off against Arkansas. When he returned, the Tigers played two of their best defensive games of the season, against Texas A&M and then Georgia in the Southeastern Conference championship game.

“Yeah, the ankle was hurting pretty bad the second half of the season a little bit, but now towards the end of it it's feeling pretty good,” Delpit said. “I consider myself close to 100%, so it shouldn't be a problem.”

Delpit was one of several important defensive players for LSU who were in and out of the lineup this season.

An ankle injury also slowed top-pass rusher K'Lavon Chaisson. The sophomore has been a terror lately and had two sacks in the semifinal victory against Oklahoma. Linebacker Michael Divinity, who sat out the last six games for what the school called personal reasons, is expected to play in the championship game.

Trevor Lawrence and Clemson will face maybe the best version of the LSU defense the Tigers have fielded all season.

“I think after the Ole Miss game, it was kind of a turnaround for us,” Delpit said. “It wasn't our best performance, and I think we sat down as a defense and just saw what we did wrong, understood that some teams might try to make those plays and run it against us again. And I think we just kind of lit a fire and started playing LSU football after that. So hopefully this last game we can keep it going.”