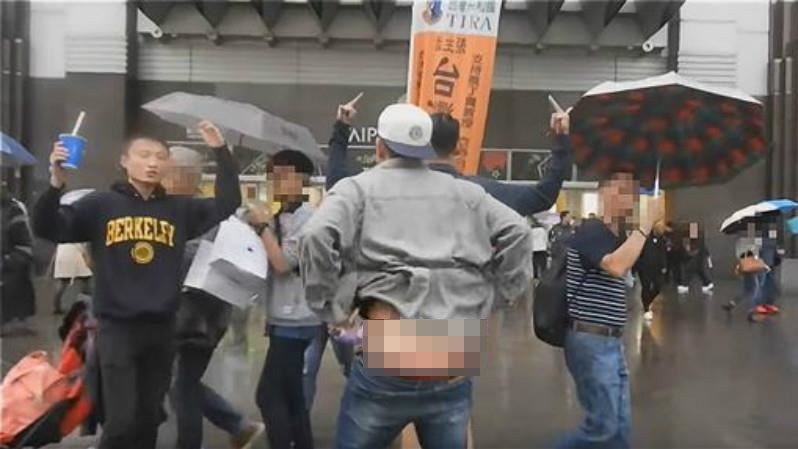 TAIPEI (Taiwan News) — Three Chinese tourists were charged with public insulting (公然侮辱罪) by police after they made obscene gestures at pro-Taiwan independence supporter Kuo Chien-kuo (郭建國) in front of Taipei 101 on Dec. 29.

In a video of the incident, which was uploaded to YouTube on Wednesday (Jan. 1) by Toyakoi Jay, a Chinese tourist can be heard singing the national anthem of Communist China, while one of his comrades drops his trousers to expose his buttocks to Kuo. A third accomplice can then be seen flashing both of his middle fingers at Kuo as he walks in front of another man holding a Taiwan independence banner.

However, before they could reach the entrance of Taipei 101, they were pulled aside by police, who had witnessed their aggressive behavior. Kuo then rushes to the scene and repeats the officer's request to present their identification cards.

Kuo quickly confronts the men and asks, "What did you just swear at me?" The demeanor of the men quickly changes from brash to sheepish.

One can be heard saying in Mandarin, "I didn't touch him, I just talked to him. We didn't do anything to him." Another can be heard claiming that they are visiting from the U.S.

However, they are unable to present adequate forms of identification with photographs and none are carrying passports. Kuo told the officers that he wished to press charges, and the three were taken to the police station.

After the three underwent questioning, they were put under investigation for public insulting (公然侮辱罪). However, because the three were originally scheduled to return to the U.S. the next day and the crime was a misdemeanor, prosecutors did not order their movement to be restricted, and they were allowed to leave the country.

Kuo claimed that the police investigation revealed that the men were the children and grandchildren of senior officials and dignitaries from Communist China, reported Liberty Times. He then vowed to sue the men to the full extent of the law.

In an interview with SET News, Kuo said that the disrespectful behavior of Chinese tourists has spread all over the world and that their attitude is extremely arrogant and domineering. Kuo said that the reason why he chose to press charges was to show them "Taiwanese won't be bullied" and to teach them a lesson.

Kuo said that he is willing to reconcile with the three men provided that they show their sincere remorse. Kuo then called on the government to implement the Anti-infiltration Act (反滲透法) and strengthen the provision on agents of the Chinese Communist Party.