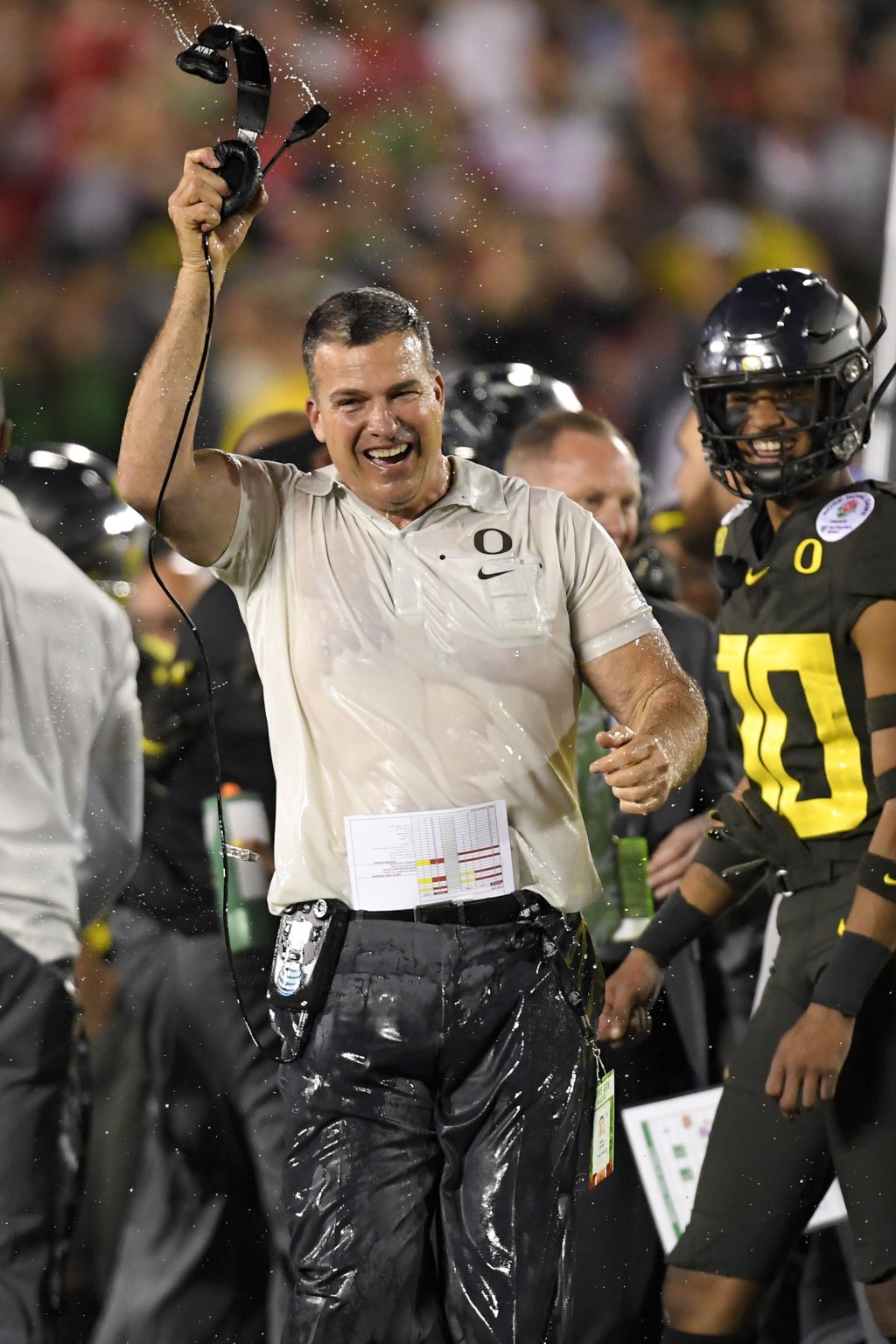 PASADENA, Calif. (AP) — The helmets are as shiny as ever, and the team still has an untold number of uniforms, but Oregon has reinvented itself as a physical and hard-nosed football team.

While their appearances in the “Granddaddy” of all bowl games in the previous decade were all about flashy offenses, these seventh-ranked Ducks used grit and timely domination at the lines of scrimmage to defeat No. 11 Wisconsin 28-27 in the Rose Bowl on Wednesday.

And so long as Mario Cristobal is coaching at Oregon, his players believe even greater success is possible.

“The best thing Oregon football has ever done is hire Coach Cristobal as their head coach because I feel like this football team embodies everything that he’s about,” senior left guard Shane Lemieux said. “And he’s bringing in these offensive and defensive linemen that are SEC-type and are physical football players, and I think he’s changing the Pac-12 with the way he coaches, the way he recruits, because we play a different way. And you’re seeing it.”

The changes at Oregon are a reflection of Cristobal’s personality, background and experience.

As an offensive lineman at Miami, he played on two national championship teams. After an up-and-down stint as head coach at Florida International, Cristobal worked as an assistant under Nick Saban at Alabama, where he was a key cog in a relentless recruiting machine.

In his two seasons at Oregon, Cristobal has stressed the need to dominate up front and has worked tirelessly to bring in the caliber of high school players to fulfill that goal.

The early results of that aim were on the Rose Bowl field in freshman defensive end Kayvon Thibodeaux and sophomore left tackle Penei Sewell. Thibodeaux, the top player in the 2019 recruiting cycle and a Los Angeles native, had one tackle against Wisconsin but pressured quarterback Jack Coan on several key third downs. Sewell anchored a line that did not allow a sack.

Wisconsin dominated the game statistically, including holding the ball for more than 38 minutes, but Oregon was able to assert itself up front in the critical moments.

Thibodeaux said the ability to execute when the game was on the line was a reflection of the atmosphere Cristobal has instilled.

Wide receiver Juwan Johnson was new to Cristobal’s approach when he joined Oregon this season as a graduate transfer from Penn State. Already familiar with what a successful program looks like after playing in two New Year’s Six bowls with the Nittany Lions, including the 2017 Rose Bowl, Johnson praised the competitive environment Cristobal has created.

Even with the loss of star quarterback Justin Herbert and four senior starters from one of the most experienced offensive lines in college football, Oregon is confident it will be able to continue its ascent under Cristobal next season.

The Ducks signed another touted recruiting class, including the top player in California for the second straight year in linebacker Justin Flowe. That influx of talent should keep even established veterans locked in during spring practice, summer workouts and training camp.

And if the combination of recruiting domination and relentless work seems familiar, it was the backbone of the Pac-12’s last national championship teams when Pete Carroll had Southern California at its peak in 2003-04. Cristobal wants Oregon to compete at that level and demands the sacrifice necessary to make a spot in the College Football Playoff not only a goal, but an expectation.

“What we do is not kind and cuddly, and it’s certainly not for everybody,” Cristobal said. “So we all stuck to a blueprint that is as demanding as it gets and will push you right to the edge until you get a breakthrough.”

“Coach Cristobal, he definitely changed the culture here,” Johnson said. “We’re not flashy. Yes, we have nice uniforms, but that’s not what we’re about.”