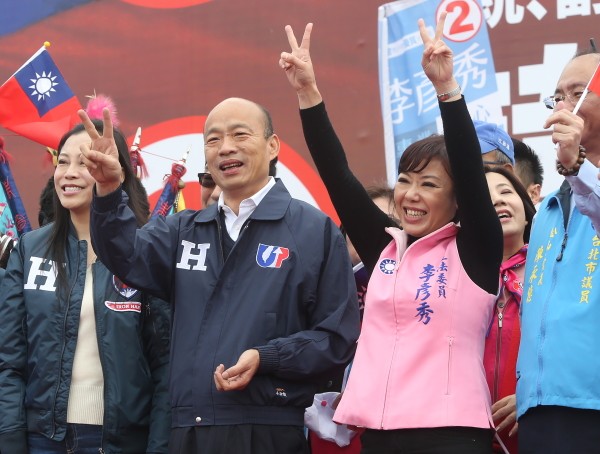 TAIPEI (Taiwan News) — The alleged mistress of Kuomintang (KMT) presidential candidate Han Kuo-yu (韓國瑜) has reportedly traveled frequently with him, staying in the same hotel as Han at least twice.

In December, Next Magazine cited the woman, referred to as Miss Wang (王), as saying that Han had given her NT$6 million (US$199,817) to purchase an apartment in New Taipei City's Xinzhung District (新莊), which allegedly served as a mahjong den. However, she denied rumors that she was having an affair with the itinerant Kaohsiung mayor.

On Wednesday, an anonymous source told the magazine that Miss Wang had traveled overseas with Han "at least five or six times," including on trips to China. The source added that the two had stayed in the same hotel on at least one occasion.

When asked for comment on the matter, Han’s campaign office spokeswoman Anne Wang (王淺秋) initially denied that the woman had any association with Han. However, the spokeswoman later called the news agency and confirmed that Miss Wang had indeed traveled with Han on overseas "business visits" on several occasions.

The spokeswoman added that Han's friend Chao Tung-chou (趙東洲) had also often participated in these trips, but she did not explain Chao's role during these junkets. She said that just because Han and Miss Wang occasionally stayed in the same hotel did not mean that they stayed in the same room together.

During the interview with Next Magazine, Miss Wang denied allegations that she was Han's mistress, but she confessed that Han would sometimes spend the night in her apartment when he became tired after playing mahjong with friends. She claimed that despite these late-night visits to her abode, there was "absolutely no abnormal male-female relationship."

She then claimed that in the decade she had been associating with Han, he had never remitted funds to her, thereby denying allegations of their extramarital affair. However, this contradicts her earlier statement about the NT$6 million he wired to her to purchase the apartment.

Since the news of Han's money transfer to the woman broke in December, Han's wife Lee Chia-fen ( 李佳芬) has reportedly been upset and has not been seen on the same stage as Han since. Lee also reportedly canceled a trip to nearby Macau and instead opted to visit Australia to raise funs for Han's campaign and try to dodge scrutiny by the Taiwanese media.