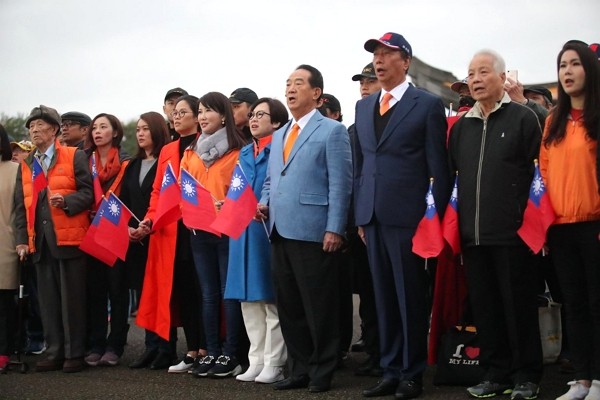 Both Gou and Soong attended the Taiwanese flag raising ceremony on the first day of the new year along with Soong's running mate, Sandra Yu (余湘), and Gou's spokeswoman, Evelyn Tsai (蔡沁瑜). While taking photos with supporters, Gou urged them to cast their ballots for the PFP and Soong in the upcoming election, reported New Talk.

After dropping out of the presidential race as well as the Kuomintang (KMT) party, Gou's political affiliation has been widely discussed, partially due to his personal grudge towards KMT candidate Han Kuo-yu (韓國瑜) and his campaign team. His close association with Taipei Mayor Ko wen-je (柯文哲) of the Taiwan People's Party (TPP) also made it difficult for his followers to determine his stance on the 2020 election, reported UDN.

Gou told the media that he wants Taiwanese voters to support the PFP in the legislator-at-large elections and that Taiwanese are "free to choose" whichever presidential candidate they see fit. However, many pro-Gou Facebook groups have since declared their support for Soong, reported Liberty Times.

The billionaire warned that the KMT had been corrupted and that the ruling Democratic Progressive Party (DPP) would be a danger to Taiwan's democratic system if it again secures a majority of the seats in the Legislative Yuan. He said that the ideal situation for any democratic country is having two large parties supervised by two smaller parties and that the PFP could be one of these.

When asked about his relationship with Mayor Ko, Gou said he had his own preference and that not joining Ko at the Taipei City Government's flag raising ceremony was not intentional. He added that both he and Ko would continue to work towards building a more stable economic environment for Taiwan in the new year.