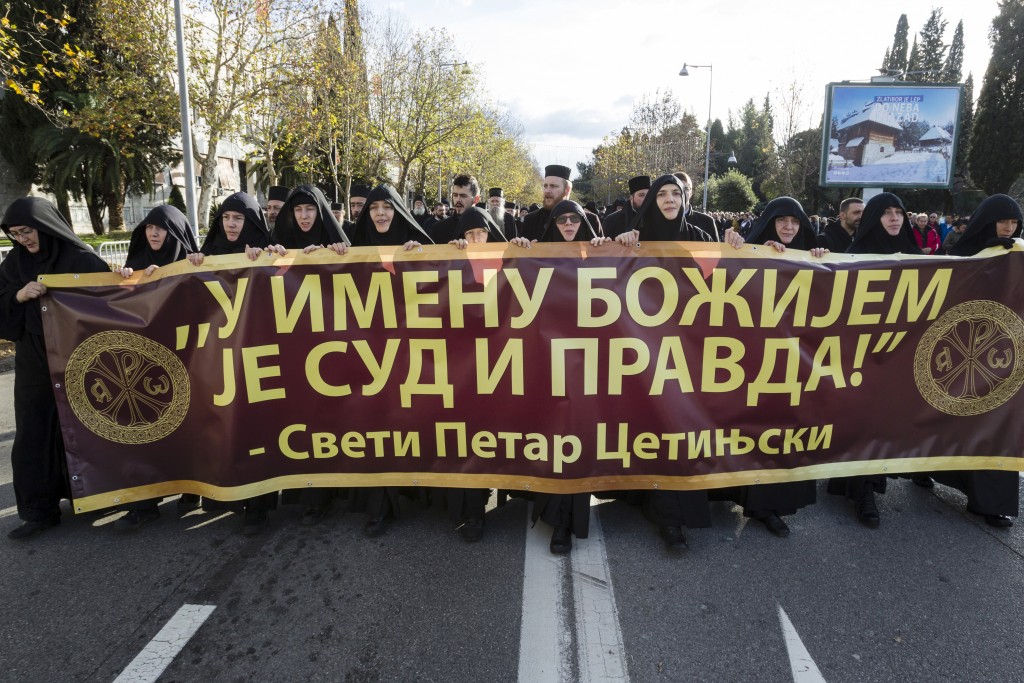 PODGORICA, Montenegro (AP) — Several thousand people on Wednesday held protests in Montenegro against a religious property bill that is opposed by the Serbian Orthodox Church and Russia.

The church insists that the law allows the state to impound its property, including monasteries, churches and other assets. The Montenegrin government has denied it wants to do so.

The Montenegrin parliament approved the legislation on Friday amid protests by pro-Serb opposition lawmakers who tried to prevent the vote, triggering turmoil in the assembly.

Led by Serbian Orthodox Church priests, pro-Serb Montenegrins have been holding protest marches since last week. Sporadic incidents were reported with the police, who have detained 45 people in the past several days.

Peaceful religious protests were held Wednesday in the capital Podgorica and several other towns.

The law says religious communities with property need to produce evidence of ownership from before 1918, when Montenegro joined a Serb-led Balkan kingdom and lost its independence.

Montenegro split again from Serbia in 2006 but some of its 620,000 citizens declare themselves to be Serbs and want closer ties with Belgrade. Montenegro defied another historic Slavic and Orthodox Christian ally, Russia, when it joined NATO in 2017.

Russia's Foreign Ministry on Tuesday joined the Serb church's criticism of the Montenegrin law, expressing “serious concern" and saying it is aimed at pushing the Serbian church out of Montenegro, according to the Russian embassy in Podgorica.

In response, the Montenegrin foreign ministry described Moscow's statement as interference in the affairs of an independent NATO member state.

Montenegro has accused Russia of being behind an attempted coup in 2016 that was aimed at preventing the Adriatic nation's pending NATO membership at the time. Moscow has denied involvement.