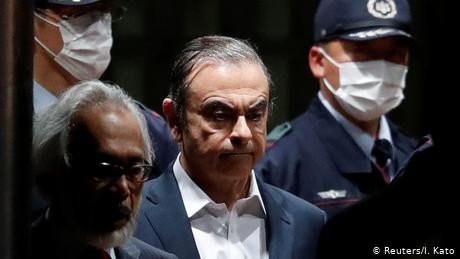 Japan was abuzz with rumors, theories and counterclaims as the sun rose on the first day of the new year. The news was sinking in that Carlos Ghosn, the former chairman of Renault-Nissan, had managed to evade police surveillance and flee to Lebanon ahead of his eagerly awaited trial here on charges of financial misconduct.

In a statement released on New Year's Eve, a day after he arrived in Beirut via Turkey apparently on a French passport, Ghosn claimed that he was escaping "injustice and political persecution."

He added that he would no longer be "held hostage by a rigged Japanese justice system where guilt is presumed, discrimination is rampant and basic human rights are denied."

The Japanese government has made no official statement on the 65-year-old former auto executive jumping bail and leaving the country, although former Foreign Minister Masahiso Sato told local media that "if this is true, it was not 'departing the country,' it was an illegal departure and an escape and this is a crime in itself."

"Was there help extended by an unnamed country?" Sato asked. "It is also a serious problem that Japan's system allowed an illegal departure so easily."

Ghosn was arrested by Japanese authorities in November 2018 on charges of financial misconduct. Prosecutors believe that he funneled millions of dollars from his former company for his own personal use and deceived shareholders about the size of his salary.

Japanese authorities remain tight-lipped about precisely how one of the most well-known foreigners in the country managed to escape. Ghosn was under close police surveillance since being released on more than €8 million ($8.9 million) bail in April.

The Japanese public has been engrossed in reports suggesting that Ghosn was smuggled out of his Tokyo apartment in a container for a large musical instrument after a private performance and surreptitiously put aboard a private jet at a small regional airport, avoiding immigration officers.

Ghosn's lawyers have gone to great pains to insist they knew nothing about his plans to flee and are still in possession of his three passports issued by France, Lebanon and Brazil.

The rumors suggest that Ghosn's Lebanese-born wife, Carole, was behind the meticulously planned operation and that she worked with contractors for months to carry out his extraction.

While the inquiry at the highest level of the government here will take time, most Japanese feel that Ghosn's decision to avoid a trial points to his guilt.

"It's ridiculous for him to suggest that he would not have gotten a fair trial in Japan," said Jun Okumura, an analyst at the Meiji Institute for Global Affairs.

"Japan is among the top 10 nations in the world in terms of judicial independence and openness, so any claim that he would not have been able to put his case if he had stayed here is utterly ridiculous," he told DW. "It's not as if he has been thrown in some dungeon to await his fate."

Read more: Who is the man who could bring down Japan's auto industry?

Ghosn and his legal team have repeatedly criticized the conditions under which he was detained for 108 days and the restrictions placed on him even after he was released on bail. These forbade him from contacting his wife for seven months and required him to wear a monitoring device on his ankle.

In his statement, Ghosn alluded to being mistreated, saying he would "no longer be held hostage by a rigged Japanese justice system where guilt is presumed, discrimination is rampant and basic human rights are denied, in flagrant disregard of Japan's legal obligations under international law and treaties it is bound to uphold."

Do the prosecutors benefit?

Another facet of Ghosn's escape that is attracting scrutiny are the suggestions that his departure — and the likelihood that he will never stand trial in Japan — may actually benefit prosecutors who were struggling to make a watertight case against him and that this move may have been sanctioned by the government in order to avoid embarrassment.

Robert Dujarric, a professor of international relations at the Tokyo campus of Temple University, told DW that two theories surrounding Ghosn's departure are being tossed around.

"The first is that the police guarding him were simply incompetent and let one of the most high-profile criminal suspects leave the country," he said. "The alternative is that the trial would look really bad for 'Japan Inc.' and the Japanese government."

It has been suggested, Dujarric pointed out, that Ghosn was encouraged to flee "just to get rid of him."

"Any trial would uncover the dark underbelly of the system in Japan and that is not something that business or the government wants aired in public," he said.

Analyst Okumura dismissed that suggestion as a conspiracy theory on the grounds that it would be impossible to keep any such collaboration secret and that if such a plan were eventually to be revealed, it would spell the end of any government.

He conceded, however, that senior executives at Nissan are likely to be breathing easier as, under Japanese law, a trial cannot take place without the accused actually present and Tokyo is unlikely to be able to extradite him back to Japan to face the charges against him.

"It is highly doubtful now that there will ever be any trial in this case and that means that Nissan's management can proceed under the assumption that this major distraction is out of the way," he said. "I don't think this will change the relationship with Renault, so it will be a return to normal."