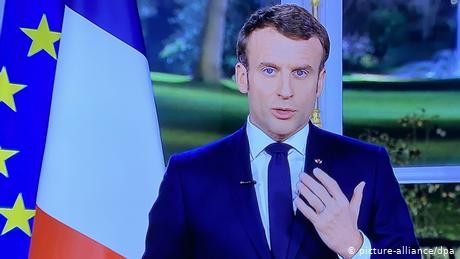 French President Emmanuel Macron called for a "rapid compromise" over an overhaul of the pension system, after weeks of nationwide strikes by trade unions which set to continue into 2020.

The president stated on Tuesday that although he expected his government to quickly find a compromise with unions on the reform, he would not deviate from the principles outlined by ministers.

"The retirement reform that I've committed myself to before you will be carried through because it is a project of social justice and progress," Macron said his traditional New Year's address to the nation.

While the French leader acknowledged citizens' concerns about the reform plan, which could require people to work longer hours, Macron said: "these worries cannot lead us to inaction."

He added that doing so "would be abandoning those who the system has abandoned, youths who would pay the price for our inaction."

The government has already announced that firefighters and police would still be eligible to retire earlier.

Macron said "we will take into account arduous tasks so that people who carry them out will be able to retire earlier."

Macron, a former investment banker, announced plans to reform the French economy in early December. The reforms would mean replacing the country's current system of 42 different sector-specific pension schemes with a points-based system for all. Macron's government says the reform is more fair and sustainable.

The President has so far refused to abandon his plans to encourage people to work until they are 64 instead of France's legal retirement age of 62.

The overhaul of the pension system has infuriated unions and led to one of the country's biggest transport strikes in decades.

Another day of mass protests is set for January 9. Teachers, hospital workers and other public-sector employees are expected to join the strike.