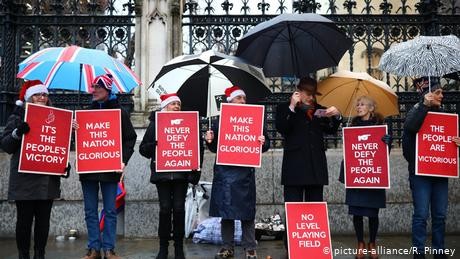 Now that the withdrawal bill has been waved through the UK's parliament, and, barring any unforeseen circumstances, will be ratified by the European Parliament, talks are expected to begin in February or March. At that stage Britain will be in a transitional period, involving continued membership of the single market and customs union, which is due to end on December 31, 2020, unless both sides agree to an extension until the end of 2021 or 2022. Any extension needs to be approved by July 1.

However, that option may already be obsolete following the government's decision to add an amendment to the withdrawal bill that would prevent Parliament from extending the transition period beyond the end of 2020. Johnson says he wants the new-look relationship with the EU to be ready for implementation in January 2021. There's more symbolism than substance to the move as it's essentially designed to put pressure on the EU to expedite a trade deal.

Johnson has so far not revealed how he intends to overcome the dichotomy of wanting a comprehensive trade deal that includes everything from financial services to tariffs on goods while at the same time diverging from EU directives.

Read more: Opinion: UK on course for a hard Brexit

"The EU will insist on something on the level playing field [on workers' rights, environmental protections, taxation, as well as state aid] because its main concern is the UK undercutting EU standards to try and be more competitive. What you probably won't have is a comprehensive agreement on on liberalization of trade and services," says Oliver Patel, institute manager and research associate at the UCL European Institute in London.

However, Johnson appears unimpressed by the EU's red lines. The new Brexit legislation voted through by Parliament has removed protections for workers' rights and watered down a commitment to take unaccompanied refugee children from Europe. A new immigration bill would make EU citizens "subject to the same UK immigration controls as non-EU citizens," thereby ending free movement.

The new protocol also outlines that Northern Ireland remains in Britain's customs territory, but in practice there would be a customs border between the province and the mainland (Goods arriving and staying in Northern Ireland from non-EU countries will be subject to British customs rules, while those going on to the EU via the Republic of Ireland will be processed under the EU system).

Michel Barnier, the EU's chief negotiator, has said that he's keen to get the fundamentals in place quickly, such as plans for duty-free, quota-free trade in goods, that could be implemented without needing to wait for ratification by national parliaments throughout the EU.

The quandary for Johnson is that he must decide whether to push for a broad deal covering everything from security and data to aviation, education, fisheries and citizens' rights. This would take years to negotiate.

The alternative would be to secure a bare-bones deal that only includes the right to export goods to the EU, cars and agriculture in particular, without tariffs or quotas. The word out of Downing Street is that Johnson is keen to secure such a Canada-style agreement (no customs union or single market) by the end of 2020.

To put it into perspective: The EU-Canada deal (CETA) took seven years to negotiate. Talks on the bloc's deal with the Mercosur states (Argentina, Brazil, Paraguay, and Uruguay) dragged on and off for 20 years.

If Johnson fails to reach an agreement with the EU, and he refuses to negotiate past his own deadline, then the legal default would be a disorderly Brexit.

Johnson has been keen to point out at every opportunity that a trade deal with the US is going to be a walk in the park, based in part on the UK's so-called special relationship with Washington.Leaving aside the fact that those ties have lost some of their gloss, there are significant practical impediments to consider.

"The UK's not allowed to sign deals until the transition period is over and other countries aren't going to want to do deals until they know what kind of arrangement the government has with the EU," says Patel.

He also suggests that warm words from US President Donald Trump have nothing to do with the reality on the ground. "The US Commerce Department's negotiating team are not going to care. They want to get the best deal they can out of the UK, which does not have anything to do with the UK's interests."

The US will prioritize its own interests as will other major potential trading partners like China, Japan or India. In its desperation to secure lucrative deals, the UK could set dangerous precedents in regard to trading standards, says Patel.

"That can be things like food safety standards or the pharmaceutical industry. [The US] will obviously want its companies to have better access to the UK market, and in many areas that involves the UK market lowering or changing its standards."