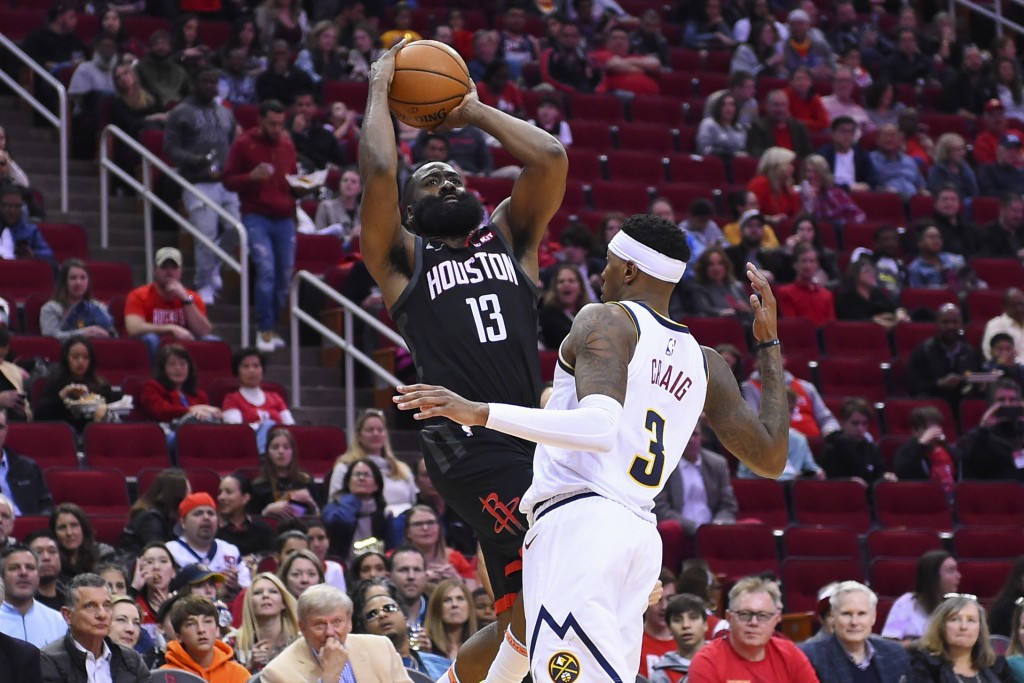 HOUSTON (AP) — James Harden scored 35 points after missing the last game with an injury to lead the Houston Rockets to a 130-104 victory over the Denver Nuggets on Tuesday night.

The Rockets were back to full strength after Harden missed his first game of the season because of a sprained right toe in a loss to New Orleans on Sunday. Clint Capela (bruised heel) and Russell Westbrook (load management) also returned after sitting out on Sunday in the 127-112 defeat.

Nikola Jokic scored 21 points for the Nuggets, who had a two-game winning streak snapped.

Westbrook had 28 points for his 11th straight games with 20 or more points, which is the longest streak by a Rockets player besides Harden since Yao Ming did it in 14 games in a row in 2006.

T.J. Warren had 21 points and Myles Turner added 14 for the Pacers, who ended a three-game losing streak in the series and improved to 22-12 overall.

Josh Richardson had 20 points and Ben Simmons had 18 points and 10 rebounds for the 76ers, who have lost three straight with a game remaining in a four-game road trip. Philadelphia dropped to 23-13.

Philadelphia was without center Joel Embiid. The two-time All-Star, who leads the team 23.7 points and 12.4 rebounds per game, was out with a sore left knee.

Boston has won six of seven and improved to 23-8.

PJ Washington led Charlotte with 15 points, and Miles Bridges had 14 points and 10 rebounds. The Hornets have lost six straight.

Kawhi Leonard scored 14 of his 24 points in the third quarter to help the Clippers to their 14th consecutive win in Sacramento dating to 2013. Ivica Zubac added eight points and 13 rebounds, and Maurice Harkless scored 12 points.

The Clippers played without Patrick Beverley and sixth man Lou Williams. Beverely is nursing a sprained right wrist he injured during Saturday night’s loss in Utah, while Williams missed the game because of personal reasons.

Richaun Holmes had 22 points and 10 rebounds for Sacramento. The Kings have lost eight straight.

Serge Ibaka had 20 points and 10 rebounds and Rondae Hollis-Jefferson scored 14 points in his first start with Toronto as the Raptors recorded their fifth straight home win over the Cavaliers.

OG Anunoby and Fred VanVleet each scored 12 points in the Raptors' second 20-point win over Cleveland this season. The Cavaliers lost 133-113 at Toronto on Dec. 16.

Toronto had lost three of four, but won for the 14th time in 19 home games. The Raptors went 9-7 in December, their busiest month of the season.

Collin Sexton scored 22 points and Tristan Thompson had 14 points and 11 rebounds for the Cavaliers, who had won four of five.

Dejounte Murray scored seven of his 15 points in overtime, and San Antonio won its eighth in 13 games. LaMarcus Aldridge added 17 points and 12 rebounds, and Patty Mills had 18 points.

Alec Burks had 28 points and Glenn Robinson III added 25, including 15 in the first quarter, for Golden State.

The Warriors — already without stars Stephen Curry and Klay Thompson long-term — were without starters D’Angelo Russell and Willie Cauley-Stein. Draymond Green had 10 points, 10 rebounds and nine assists in 36 minutes.