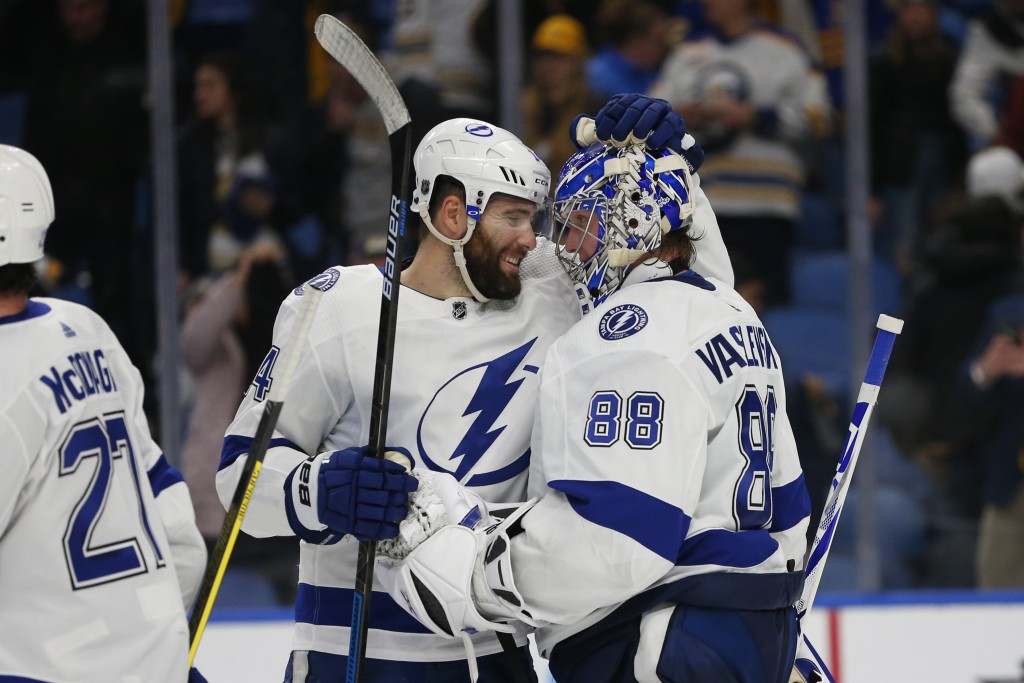 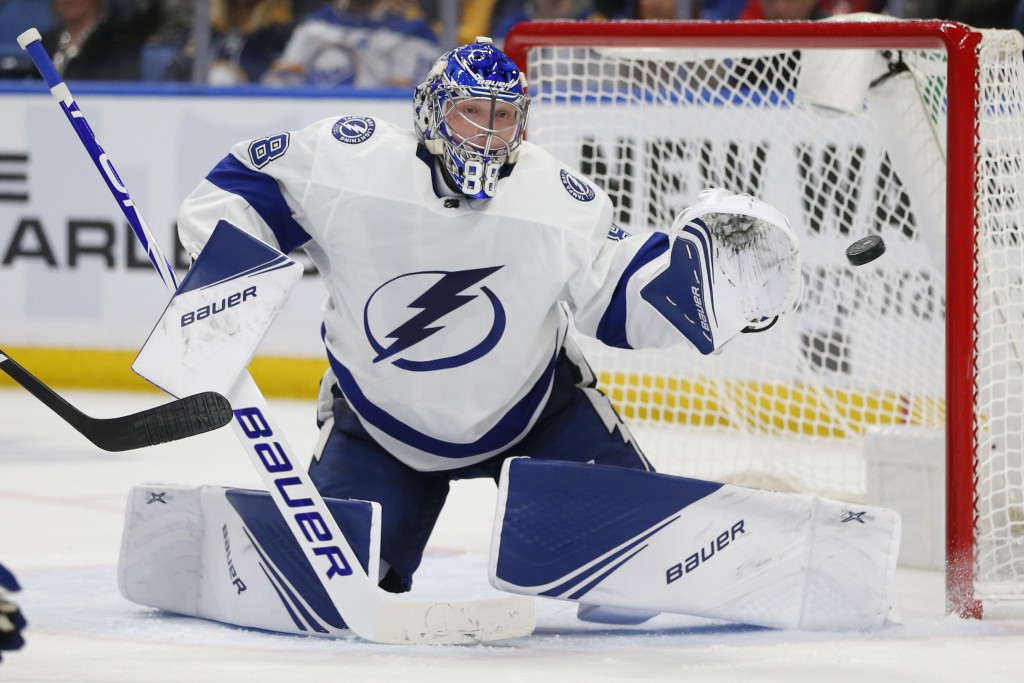 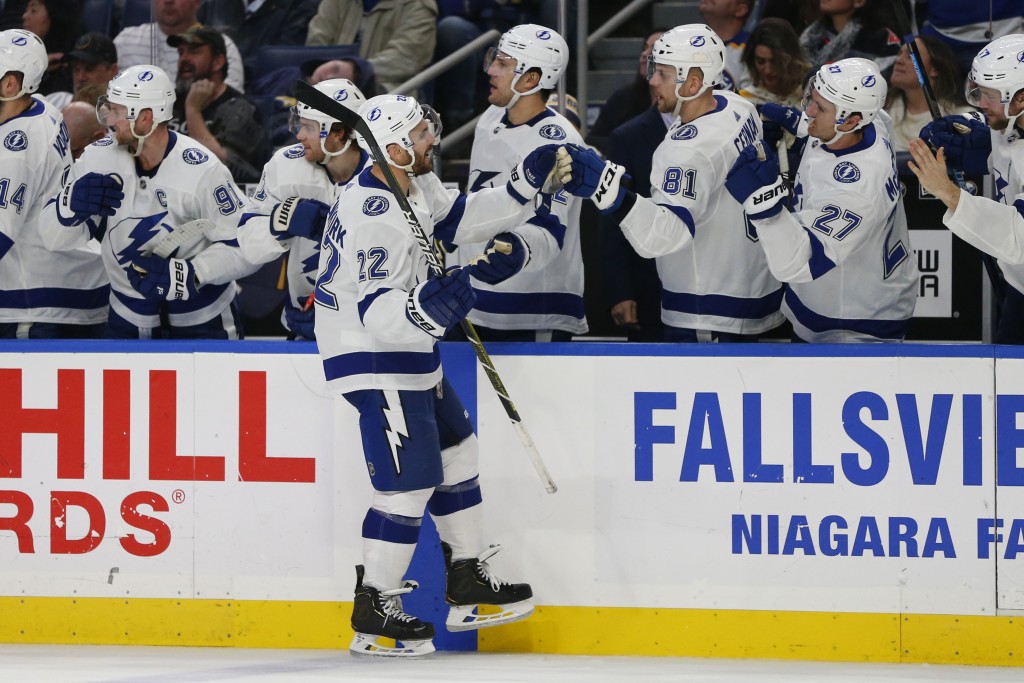 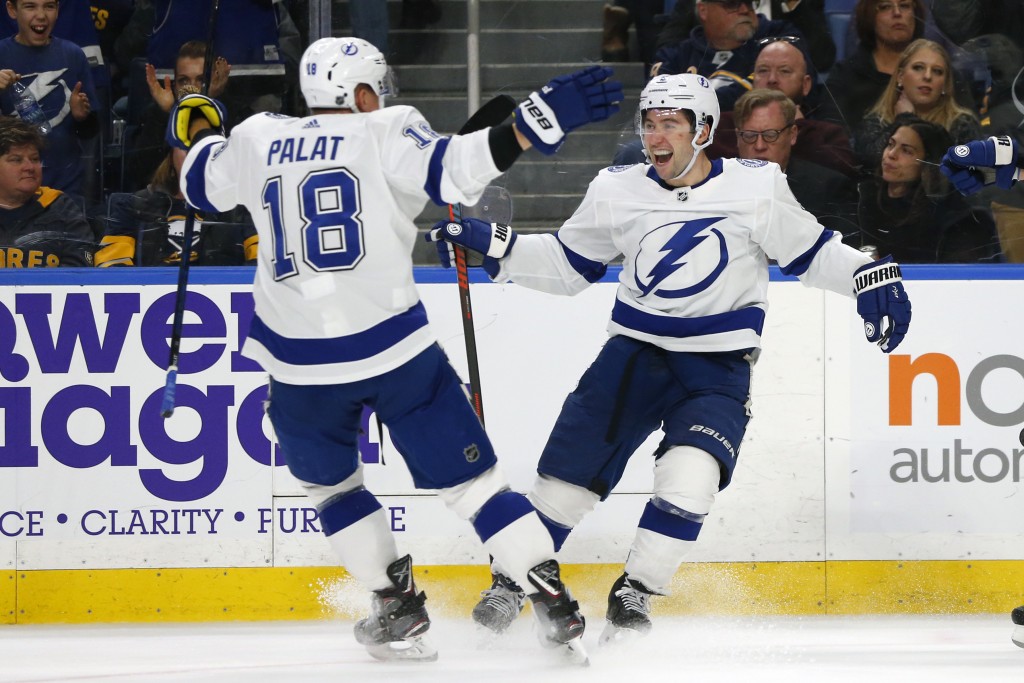 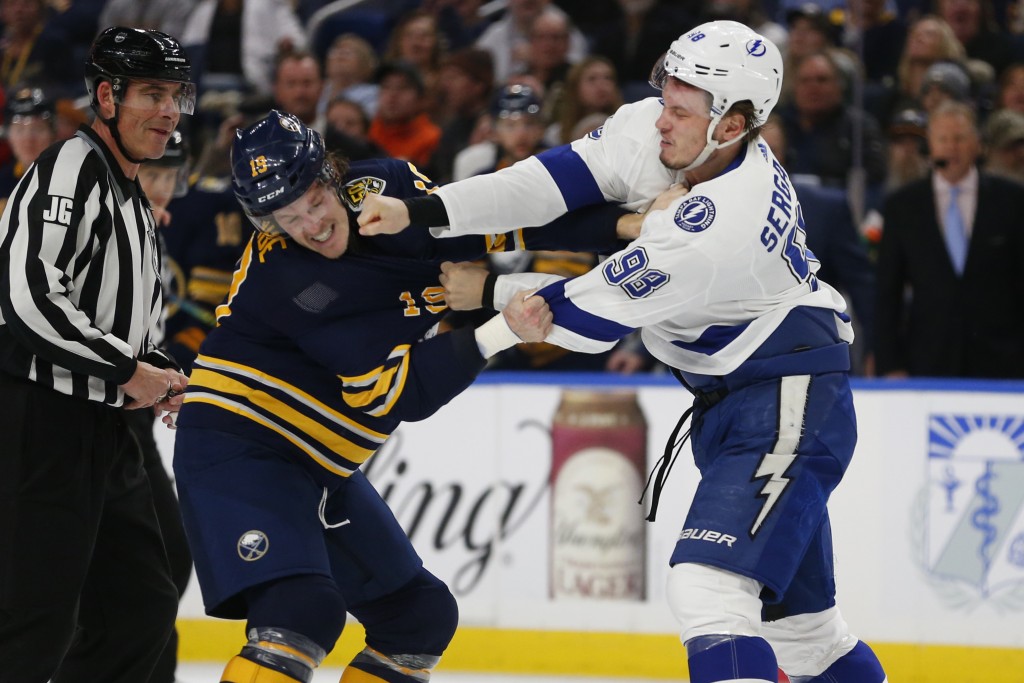 BUFFALO, N.Y. (AP) — Alex Killorn scored two goals, Tyler Johnson had a goal and two assists, and the Tampa Bay Lightning came back from a three-goal deficit to beat the Buffalo Sabres 6-4 on Tuesday night for their fourth straight win.

Ondrej Palat and Anthony Cirelli each added a goal and an assist, Kevin Shattenkirk also scored, and Andrei Vasilevskiy stopped 18 shots as the Lightning opened a four-game road trip with their 12th consecutive win against an Atlantic Division opponent.

Conor Sheary had a goal and two assists, and Marcus Johansson had a goal and an assist for Buffalo. The Sabres also got goals from Jack Eichel and Jimmy Vesey in losing their fourth in a row. Linus Ullmark made 16 saves.

Killorn’s second goal of the game and 15th of the season gave the Lightning their first lead of the game 8:08 into the third period. Pat Maroon set up the go-ahead goal with a pass from behind the net. Killorn beat Buffalo defenseman Rasmus Dahlin to receive the puck in the high slot and sent a wrist shot past Ullmark.

Shattenkirk got the tying goal less than two minutes earlier on a straightaway wrist shot that bounced off Johansson’s skate and over Ullmark’s glove. Cirelli scored into the empty net in the closing seconds.

The Lightning scored twice in a span of 2:58 to get within a goal late in the second period.

Killorn knocked in the rebound from Point’s shot that bounced off the right post on a power play. Then with about three minutes left in the period, Johnson received a long pass from Palat at the blue line and scored on a partial breakaway.

Eichel made an outstanding individual effort to score his first career shorthanded goal and give the Sabres a 4-1 lead midway through the second period.

Buffalo’s All-Star center blocked a shot from Shattenkirk before skating up the right wing and faking a shot from the circle to maneuver around Shattenkirk. Eichel moved the puck to his backhand and swept it past a sliding Vasilevskiy on the other side of the crease for his 25th of the season.

The goal came with 38 seconds remaining on a Lightning power play that followed Buffalo’s Jake McCabe receiving a penalty for instigating a fight with Tampa Bay’s Mikhail Sergachev in response to a hit on Eichel.

Sheary gave Buffalo the lead in the final minute of the first period. Curtis Lazar set up Sheaty for the one-timer from the right slot.

Johansson made it 2-0 when he beat Vasilevskiy with a long wrist shot from the right wall in the early stages of the second period. Buffalo regained its two-goal lead later in the second when Johansson made a slick backhand pass to set up Vesey in front of the net, after Johnson fed Palat in the high slot for Tampa Bay’s first goal seven minutes into the period.

NOTES: The Lightning swept the four-game season series with the Sabres for the second time in four seasons. … Killorn played in his 553rd NHL game, passing Brad Richards for sixth-most in Lightning history. … Sabres F Dalton Smith made his NHL debut after being called up from the minors and signing a one-year contract on Monday. … Buffalo scratched F Evan Rodrigues to make room for Dalton in the lineup. Prior to Tuesday’s game, TSN’s Darren Dreger reported that Rodrigues has requested a trade. … Sabres D Marco Scandella returned after missing two games due to an illness. … Johnson’s 16 assists against the Sabres are the most he has against any NHL team. … The Lightning played their fifth of eight straight against Eastern Conference and fourth of six in a row against Atlantic Division foes.

Lightning: At Montreal on Thursday.