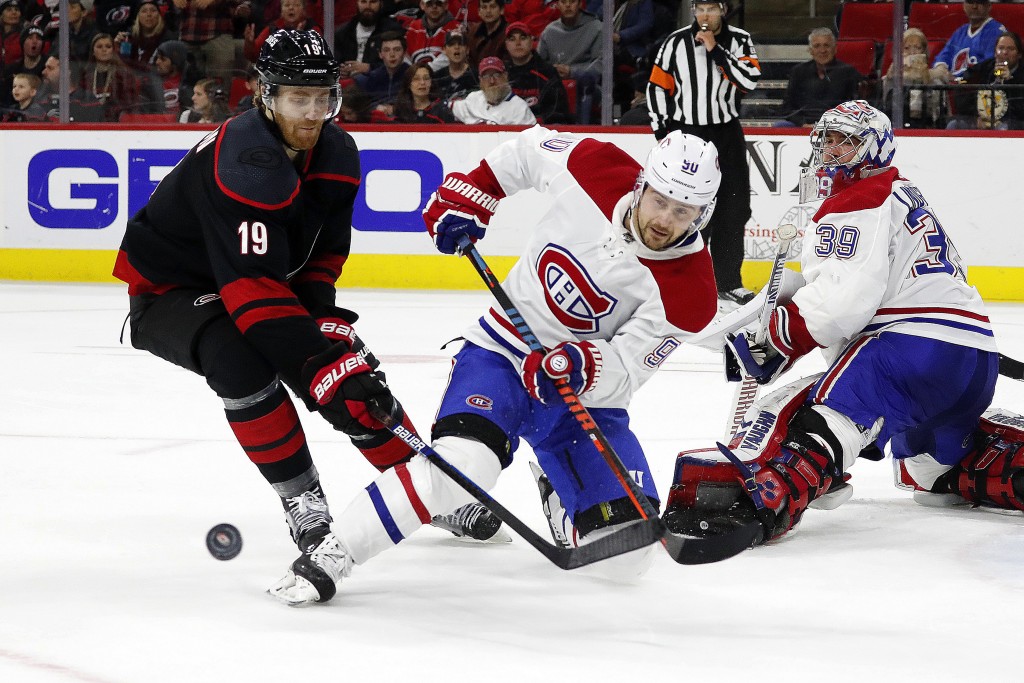 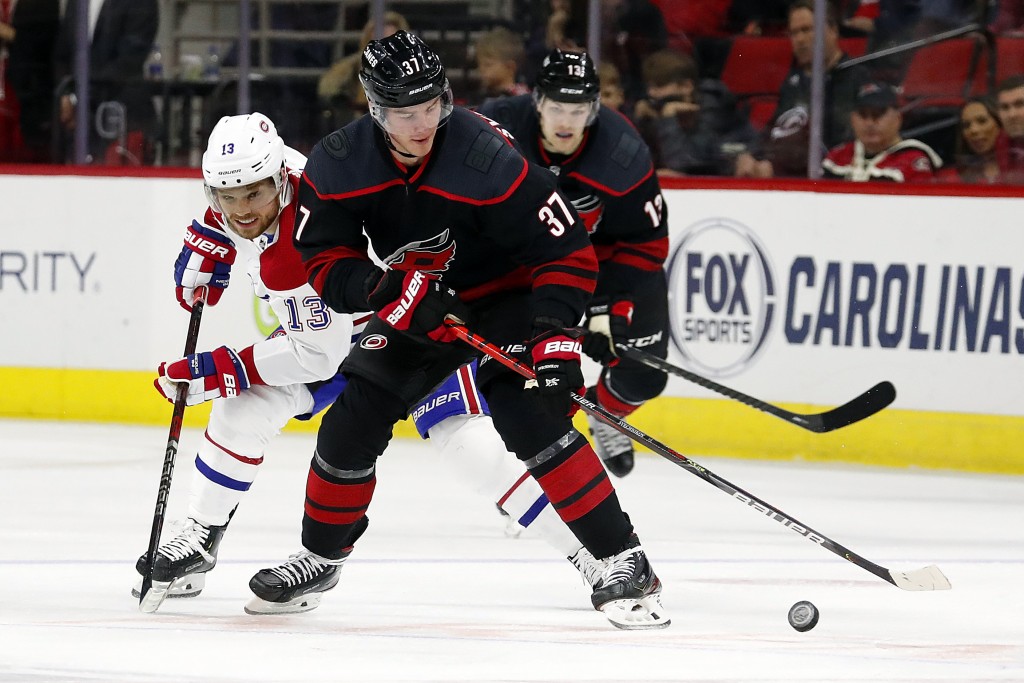 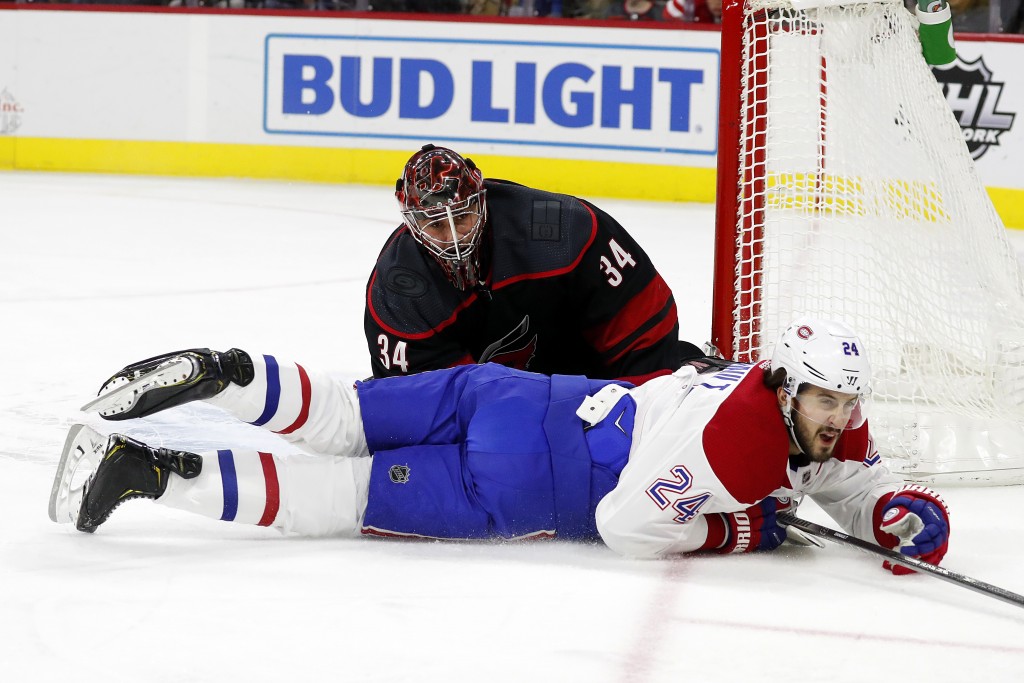 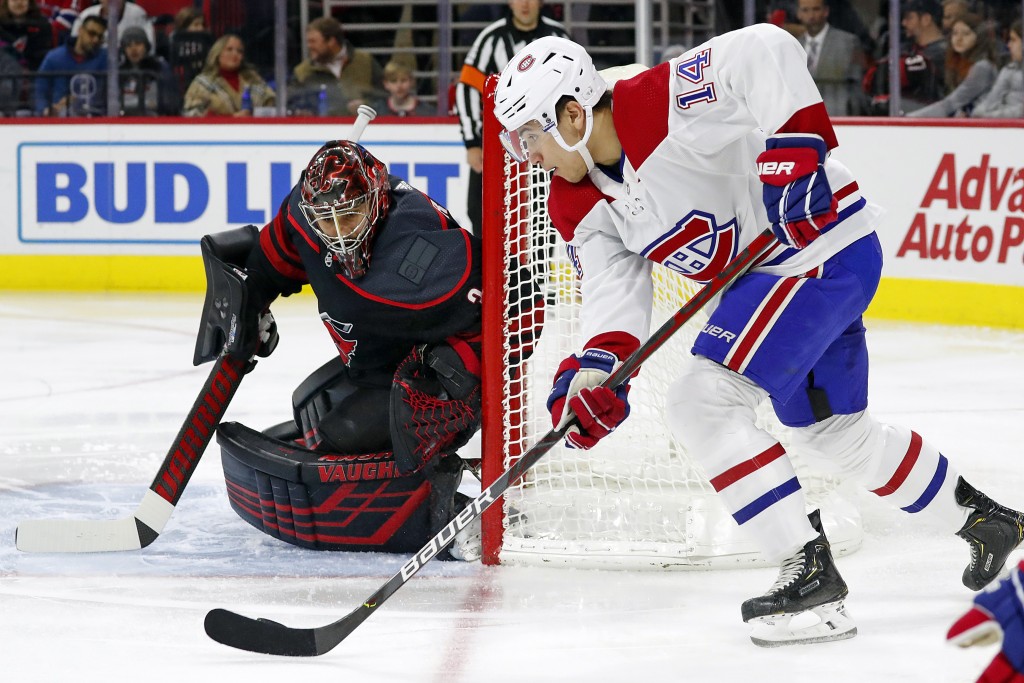 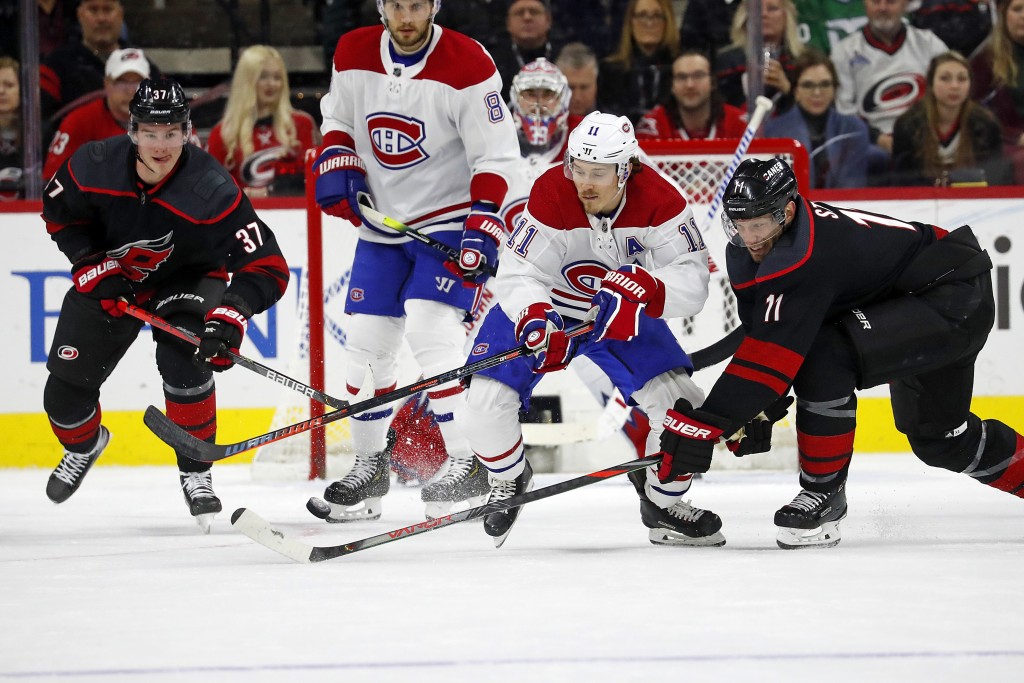 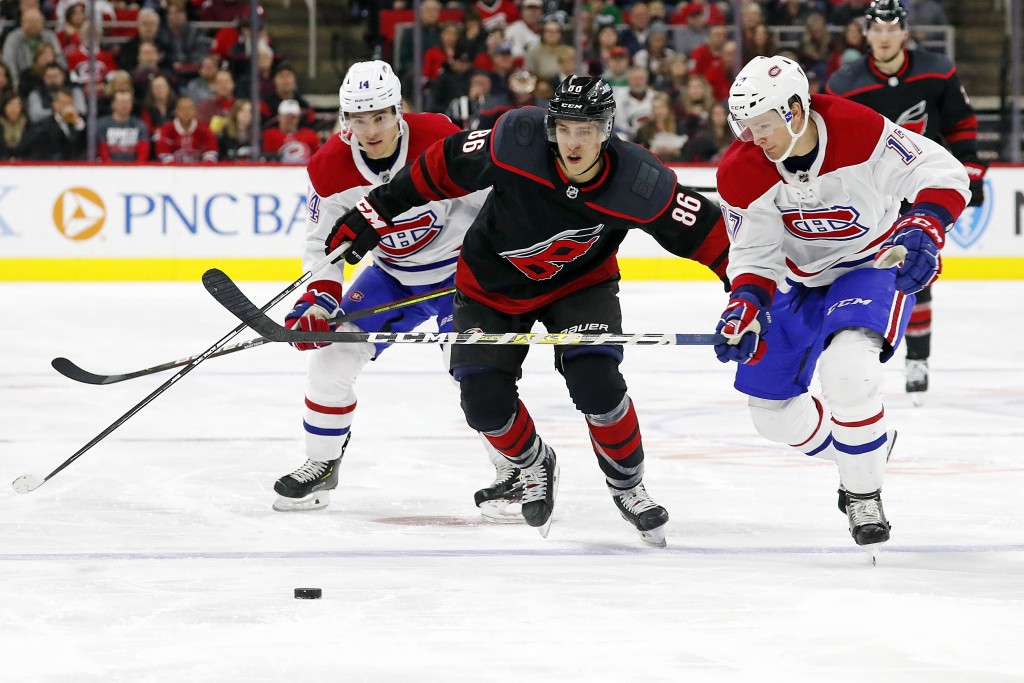 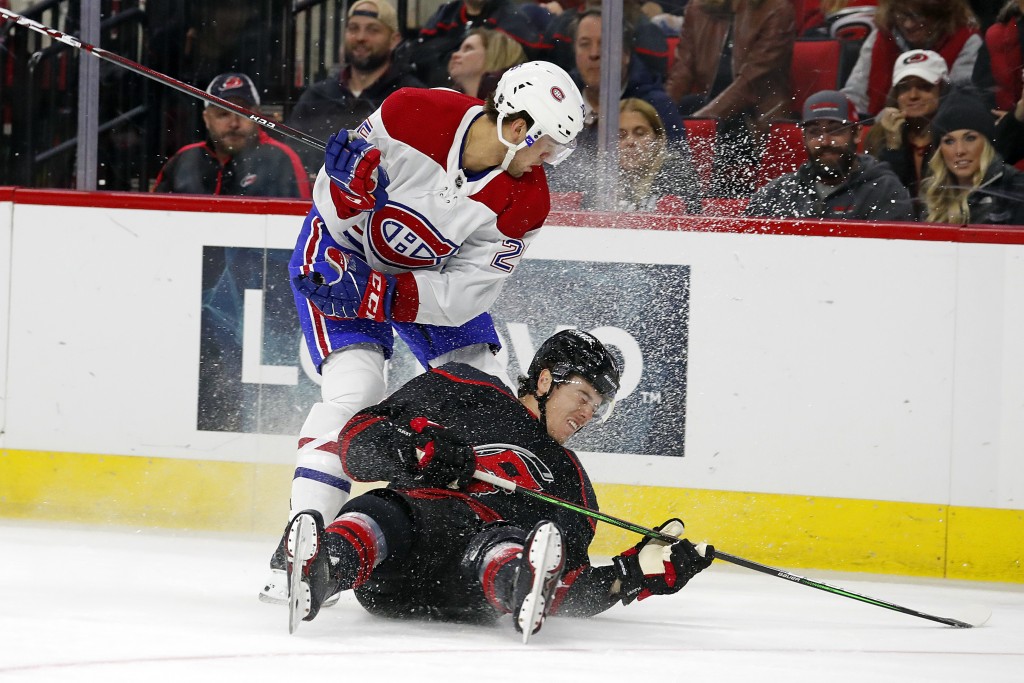 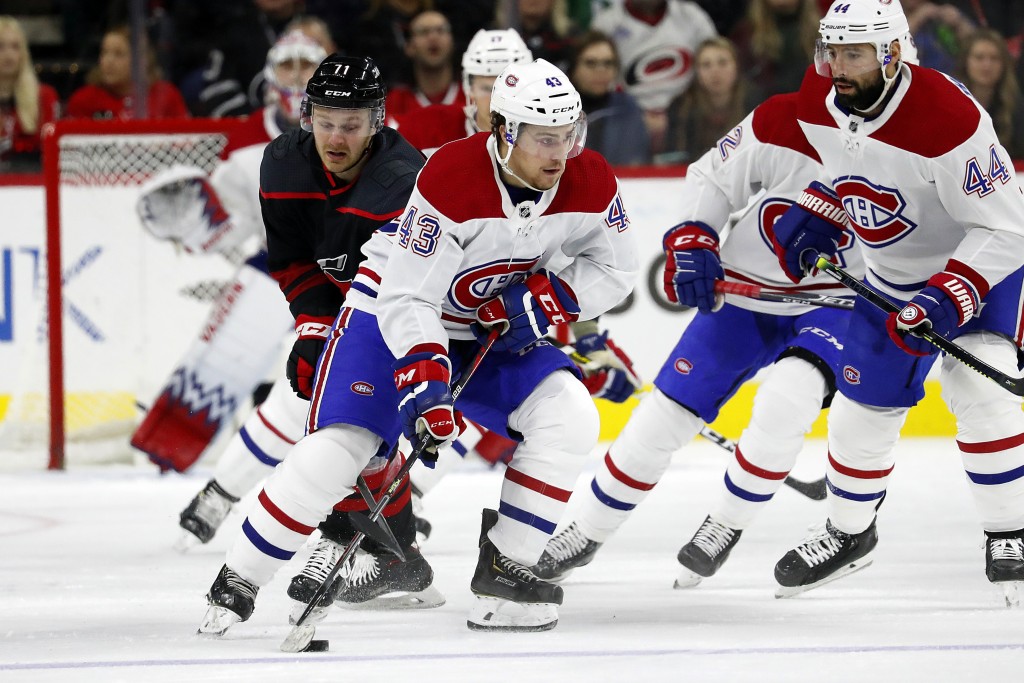 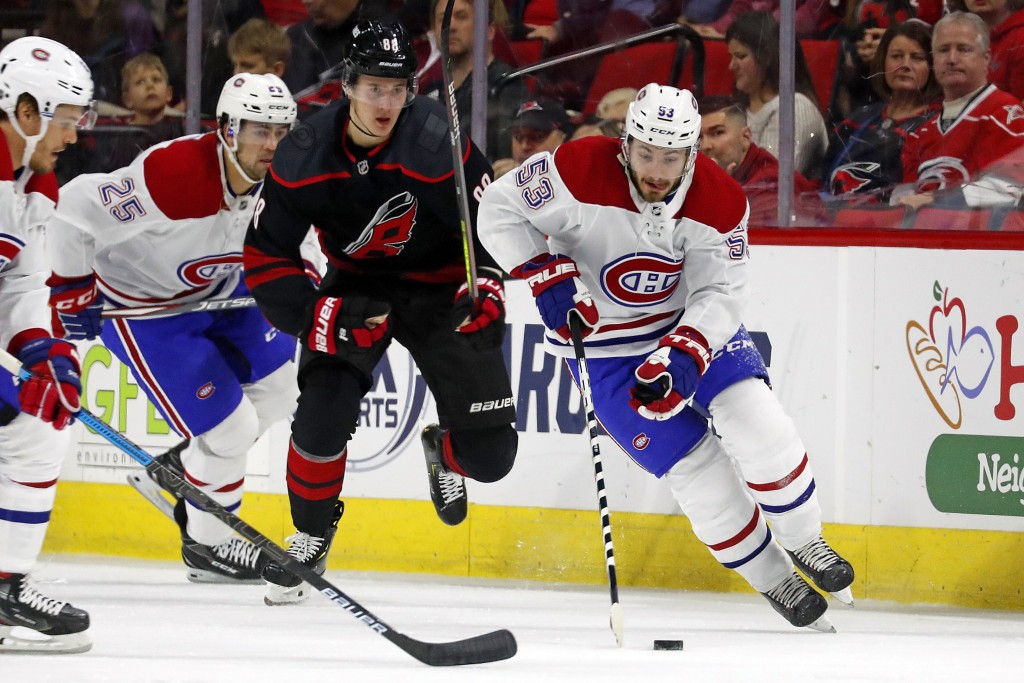 RALEIGH, N.C. (AP) — Erik Haula had a goal and an assist and Charlie Lindgren made 33 saves in his first start of the season, leading the Carolina Hurricanes to a 3-1 win over the Montreal Canadiens on Tuesday night.

Sebastian Aho also scored and Teuvo Teravainen had two assists for the Hurricanes (24-14-2), who won their second straight game after a three-game losing streak. Ryan Dzingel scored into an empty net.

Max Domi scored for the seventh straight game for the Canadiens (18-16-6), who dropped their third straight and closed out a seven-game trip with a record of 3-4.

Petr Mrazek stopped 28 of 29 shots for the Hurricanes, including a save on a breakaway by Phillip Danault when the score was tied 1-1 in the first period.

Ryan Poehling appeared to tie the score at 2-2 for Montreal with 8:08 remaining in the third period, but a replay review after a challenge by the Hurricanes concluded that Danault interfered with Mrazek on the play.

Haula opened the season with eight goals in his first 14 games before missing 19 of the next 21 due to injury. In five games since returning Dec. 21, he has three goals and six points, none bigger than his second-period score Tuesday.

Carolina entered the game with the seventh-most points in the Eastern Conference and looking to build on Saturday’s win over Washington. The meeting with Montreal was the second game in a seven-game homestand that presents a critical opportunity to gain points in the standings near the midway point of the season.

With the score tied 1-1, Haula parked in front of the net and converted a feed from Brett Pesce after Teravainen started a rush with a clever pass to Pesce. That was the only goal of the second period.

Aho opened the scoring for the Hurricanes on a power play just 1:55 into the game when he batted the rebound of a Haula shot into the net. A replay review confirmed that the puck was below Aho’s shoulder when he hit it, so the goal was allowed to stand.

Domi evened the score at 1-1 later in the first when he poked the puck away from Teravainen in the Carolina zone and capitalized on the turnover by send a wrist shot from the slot high into the net on Mrazek’s glove side.

NOTES: Aho has scored 20 of his 23 goals since Nov. 1, more than any other NHL player during that span. ... Domi extended his point streak to eight games with his 12th goal of the season in the first period. He has seven goals and two assists in his last eight games. ... Teravainen has at least one assist in seven of his last eight games and has 33 assists this season.

Canadiens: Begin a three-game homestand on Thursday against Tampa Bay.

Hurricanes: Face Washington on Friday in the third game of a seven-game homestand.