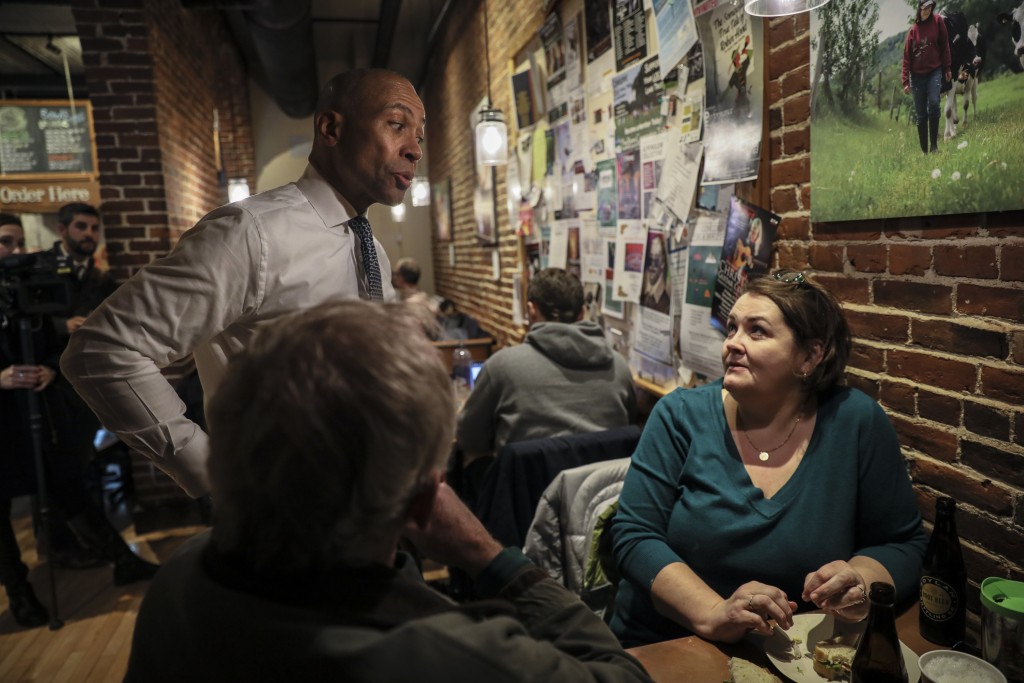 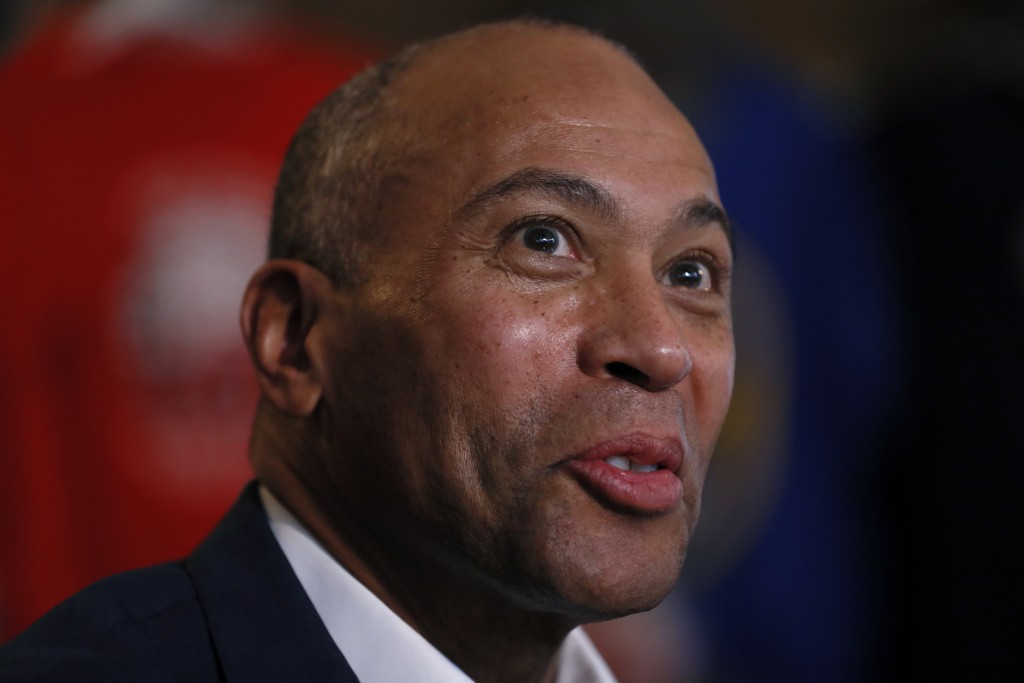 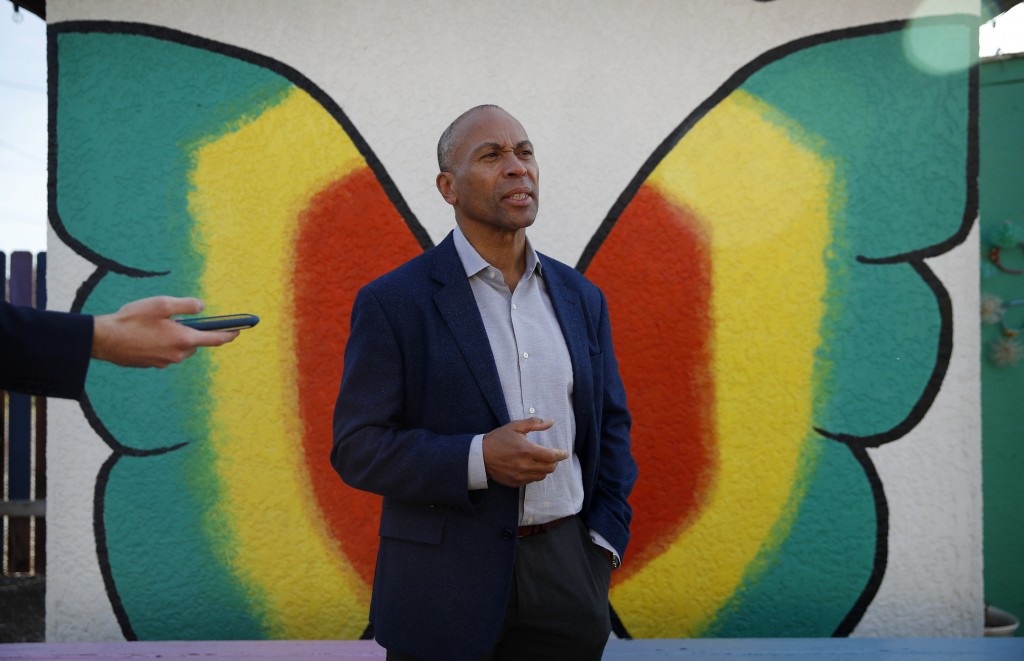 “The game plan was really simple: Put him in one living room in each of the 99 counties in Iowa, and those people would discover the magic,” Kaplan said. “He would’ve won Iowa.”

But the former Massachusetts governor balked — deciding to focus on his wife’s battle with cancer. By the time he jumped into the race in mid-November, after his wife was pronounced cancer-free, he was months behind his Democratic rivals and in need a new game plan.

“They’re going to have to catch that magic — not in person, but in other ways,” Kaplan said.

Patrick is struggling to find those ways. In the six weeks since he jumped into an already packed primary, he hasn't registered in polling in the critical early nominating states. He hasn't qualified for the nationally televised debates. Unlike another latecomer to the race, Michael Bloomberg, Patrick doesn't have the campaign cash or personal fortune to blanket television screens with advertising.

And while his competitors are staging rallies and town halls, Patrick is still holding the kind of small, intimate events — a business tour here, a roundtable with local leaders and advocates there — that other candidates held months ago.

Ask those close to Patrick what he needs to do in the presidential race, and the word “magic” comes up, again and again. Patrick's reputation is built on his charm and oratorical skills in groups big and small, an appeal that powered his surprise victory over more seasoned politicians in the 2006 Massachusetts governor's race. But it's far from clear that such “magic” can make up for lost time in a presidential campaign.

"Governor Patrick’s model for the campaign is a deep, long, person-to-person organizing effort," said John Walsh, who ran Patrick’s 2006 campaign and worked with him on strategy for his 2020 presidential run over a year ago. “That’s mostly a long-term play. So they're going to have to figure out how to accelerate that.”

“They’ve been doing it for months, in some cases years, and spent millions of dollars, and it’s still wide open," he said in an interview. “So don’t ask me why we’re not doing what everyone else is doing. Ask them why they keep doing what they’ve been doing and haven’t locked it down."

Patrick is largely conceding Iowa's Feb. 3 caucus, the first nominating contest in the Democratic primary, and focusing his efforts instead on New Hampshire and South Carolina, where he sees more natural advantages. But he has yet to register in surveys of the field in either state.

He’s spent the last six weeks building a campaign that counts a staff of about 70. His aides argue the lean operation is an asset, allowing them to nimbly redeploy resources and keeping overhead low. But the impact of playing catch up has been clear. His campaign recently failed to collect enough signatures to get him on the primary ballot in Michigan.

Campaign aides say they're looking to January as an opportunity for Patrick to break through, especially if the senators in the race are stuck in Washington for impeachment proceedings. Patrick has planned a series of policy speeches during the month, where he’ll outline his proposals and emphasize his experience as a chief executive in a field topped by senators, a former vice president and a mayor.

The campaign maintains fundraising is solid — it hasn't yet reported its numbers — and a super PAC has already been established to support him, though it’s unclear when the group will spend money on his behalf.

Patrick is little known nationally. Yet polling indicates a majority of Democratic voters with a first-choice candidate could still change their minds before they vote in the primaries.

On the stump, Patrick make the case for compassionate capitalism — a message that stands out in a primary dominated by liberals' calls to break up big corporations and expand government aid programs. He brings up his time working for the private equity firm Bain Capital, noting he was advising companies on how to work towards social good. He highlights the public-private partnerships he helped foster as governor of Massachusetts — to argue for a role for private business in positive social change.

While other candidates have sharpened their criticisms of each other, Patrick largely avoids even veiled jabs at his opponents.

At a roundtable of business people in Portsmouth, New Hampshire, in December, Patrick went over well with the roughly two dozen people in attendance. The group largely wanted to talk about policy, asking about his positions on health care, the opioid crisis and fisheries. Several of those who came to the event said they were still undecided.

“Honestly I came because I had never heard of him,” said Vicki Mutschler, 29, an office manager from Somersworth, New Hampshire, who left thinking Patrick is “is a really good option."

“He seems like he’s pretty right in the middle of being able to bring everybody together instead of being super, super separated like how it is," she said.

Maddie Cassidy, 24, a marketing specialist from Seabrook who knew Patrick from her time living in Massachusetts, said Patrick came off as more authentic than a typical politician.

“I feel so many candidates in every political race just seem inauthentic to me," she said. “I feel like he’s really speaking from his heart and his experience.”

Patrick has made 17 trips to New Hampshire and promised the group he would to continue to “make my presence felt."

“I am not in this to have a voice or to give interviews or to make speeches,” Patrick said. “I am in this to win. I have been thought of as an underdog for almost my whole life in almost everything I’ve done and I’ve done it anyway. So stay tuned.”

But on the last weekend of the year, just over six weeks from the New Hampshire primary, Patrick was in Chicago. Instead of a major rally or speech, he stopped at two small businesses and met local clergy on Saturday, and attended services at Trinity United Church of Christ, Obama’s former church, on Sunday. While he said he’s leaving the former president alone these days — “he’s finishing his book!” — Patrick is in frequent contact with Valerie Jarrett, one of Obama’s closest advisers and a longtime Patrick confidant as well.

Patrick also spent some of his weekend in the neighborhood where he grew up, visiting with one of his grade-school teachers and an old friend to film scenes for his first ad, which he expects will begin in New Hampshire in the coming weeks.