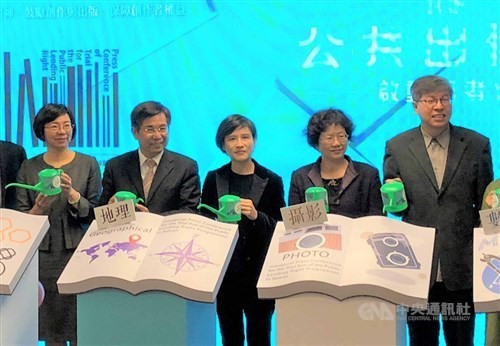 On Jan. 1, Taiwan will become the first country in East Asia to adopt a Public Lending Right (PLR) program, under which writers will receive compensation for free public access to their books at two national libraries, the Ministry of Culture said Tuesday.

The introduction of the PLR program on a trial basis is a historic step by Taiwan to respect and recognize creative works, Culture Minister Cheng Li-chiun (鄭麗君) said Tuesday at a joint press conference with the Ministry of Education (MOE).

"Taiwan is the first country in East Asia to adopt a Public Lending Right (PLR) program," she said.

Under the program, a payment of NT$3 (US$0.1) will accrue each time a book is loaned at the two libraries -- the National Library of Public Information in Taichung and the National Taiwan Library in New Taipei, according to a statement issued by the MOE.

The compensation will be paid annually, starting in 2021, with 70 percent going to the author and 30 percent to the publisher, the MOE said.

In the trial stage, only books written by Taiwanese authors, published by registered entities in Taiwan, and assigned a valid International Standard Book Number (ISBN) will be eligible for PLR payments, the education ministry said.

Chinese translations of books by foreign authors and publishers will not be part of the program, which will be adopted Jan. 1, 2020 on a three-year trial basis, the MOE said.

According to the MOE, the government will allocate NT$10 million a year to the PLR program.

The PLR system was first implemented in Northern Europe about 70 or 80 years ago, and since then, it has expanded to only about 30 countries around the world, Education Minister Pan Wen-chung (潘文忠) said at the press conference.

He and Cheng both expressed the hope that the program will help encourage writing and boost Taiwan's publishing industry.

Also speaking at the press conference, China Times Publishing Chairman Chao Cheng-ming (趙政岷) said that although the compensation will be negligible in the trial phase, it will be "good support."

"It is also important to freedom of the press in Taiwan," he said.

Taiwanese writer Liao Yu-hui (廖玉蕙) said the program is a significant step at a time when fewer and fewer people are buying books, and it gives her hope.

Over the years, she has gained good reader reviews, but readers now will be saying they want to borrow her books from the library, Laio said with a laugh.