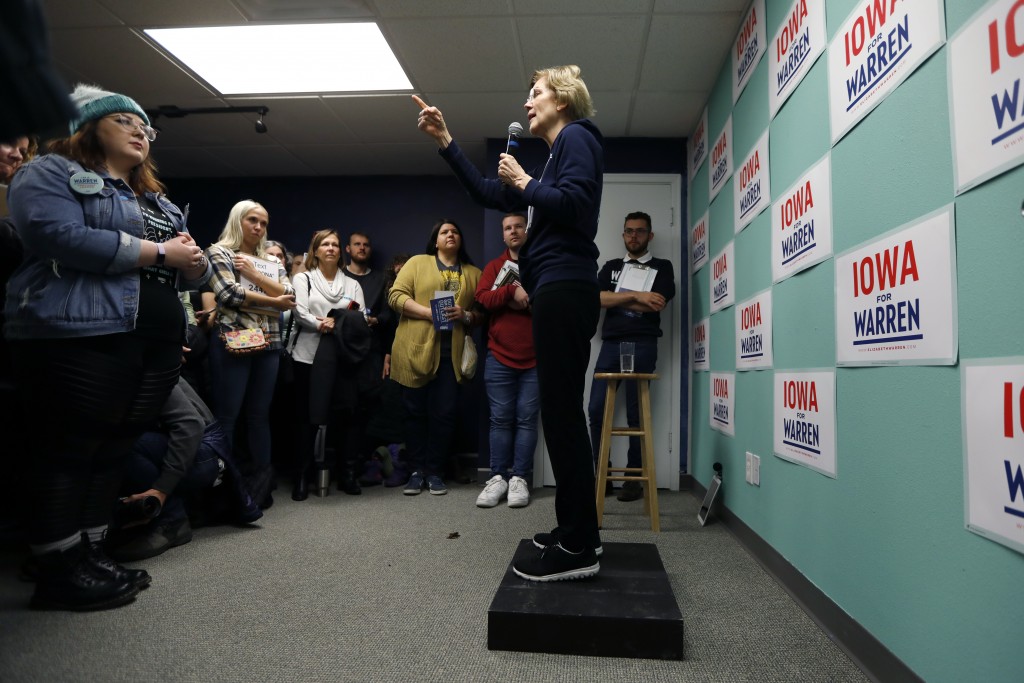 BOSTON (AP) — Many of the Democratic candidates looking to unseat President Donald Trump in 2020 are spending the last day of 2019 ringing in the new year with would-be supporters. Elizabeth Warren is marking her anniversary of forming a presidential exploratory committee with a speech at Boston's Old South Meeting House on Tuesday highlighting how she'd stamp out government corruption. The Congregational church is famous for being the organizing point for the Boston Tea Party in 1773.

Bernie Sanders is holding a year-end news conference followed by an evening “Big New Year's Bash” featuring what the campaign describes as “Prince's longtime backing band” in Des Moines, the capital of Iowa, which holds its lead-off caucuses on Feb. 3. Also campaigning in Iowa is New Jersey Sen. Cory Booker, who has a pair of house parties on Tuesday afternoon.

Businessman Andrew Yang has invited supporters to mark midnight at a late-night party in New Hampshire, which is set to hold the first primary, on Feb. 11. Minnesota Sen. Amy Klobuchar is doing an afternoon town hall in New Hampshire, while Colorado Sen. Michael Bennet also is traveling in the state.

The crush of events reflects how little time there is to spare before voting begins. Even though campaigning ground to a near halt for Christmas Eve and Christmas, candidates are betting voters will be more amenable to their messages on the final day of the year.

“You've got to use every minute,” said Kelly Dietrich, founder and CEO of the National Democratic Training Committee, which trains candidates and staff all over the country.

Not everyone is getting into the New Year's Eve action. Former Vice President Joe Biden campaigned Monday in New Hampshire and had scheduled no public events Tuesday. Mayor Pete Buttigieg of South Bend, Indiana, has a New Year's Eve calendar similarly clear of public events.

Most of the candidates don't have events scheduled for New Year's Day, though former Massachusetts Gov. Deval Patrick is planning to attend services at Mother Emanuel in Charleston, South Carolina, where nine African American churchgoers were shot to death in 2015.

Dietrich said that sometimes activities like door-knocking can be more effective for candidates during the holidays since many people are home from work. They can also use times of traditional parties, like New Year's Eve, to rally volunteers and others who have helped with campaigning over the long haul.

Warren, who was a Harvard Law School professor before becoming a senator in 2012, will be on her home turf in Boston. While Yang will be in New Hampshire, his supporters are holding a separate New Year's Eve party to "watch the ball drop” in his home state of New York.

Fundraising also typically declines between Thanksgiving and New Year's Day. But Dietrich said candidates still use the time to work the phones, and he instructs clients to touch base with past donors who haven't reached maximum donation limits, reminding them to do so before the end of the year.

“You can't take time off when you're running for president,” he said. “Your vacation happens the day after the general election."