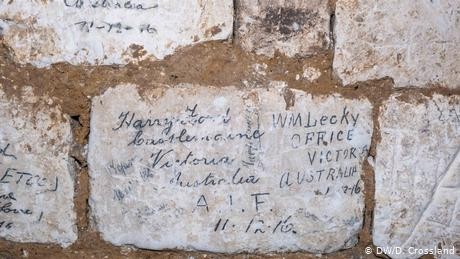 WM Lecky visited the spectacular underground city of Naours in northeastern France in 1916 while on rest and recuperation from the fighting on the Western Front.

For just a few hours, he was a tourist, strolling around the tunnels and caves of this medieval labyrinth built as a refuge from pillagers. Like thousands of Australian soldiers who came here, Lecky wrote his name on the wall, complete with his hometown in the state of Victoria, Australia.

Read more: How the battlefields sounded as World War I guns fell silent

Lecky didn't survive the war. The website of the Commonwealth War Graves Commission lists William Mervyn Lecky as having fallen on September 1, 1918. He is buried in a cemetery in Peronne, an hour's drive away.

His name is among a total of 3,200 — of which 2,200 are Australian soldiers — that have been found in the tunnels of Naours.

"They had tour guides, and shuttle buses were laid on to take the soldiers to see the tunnels," said Gilles Prilaux, a leading researcher in World War I battlefield archaeology. "The Anglo-Saxons, especially those who come from very far away, that is to say the Australians, the Canadians, the New Zealanders, the South Africans, they left their names and a lot of other information like their postal address, service number and city of origin."

During the war, soldiers on all sides made inscriptions in tunnels, caves and bunkers. Prilaux, who works at the EPCC Somme Heritage Organization, said graffiti has been found at 400 underground sites in the Picardy and Nord-Pas-de-Calais regions alone.

It makes up a trove of historical information and artistry that is attracting growing interest from researchers and the descendants of the soldiers. The graffiti sheds light on the mindset of the men who had to fight in a war that became synonymous with futile sacrifice.

The writing is also enabling researchers to trace soldiers and their families, because in many cases, it is the last record of men who simply disappeared. The First World War is infamous for the hundreds of thousands who went missing because they were obliterated by shellfire or who sank into the churned-up mud of Flanders.

When Prilaux started researching the soldiers who wrote their names in Naours, he left messages on Facebook pages dedicated to battalions that fought in the war. "I asked for help in finding the families of a soldier who fought in such-and-such a battalion."

The response was overwhelming. "I started receiving a hundred emails a day from families writing to find out if their ancestor had left their name at Naours. I have already met around 20 families who made the trips specifically to see inscriptions left by their Australian ancestors."

"The First World War was zero hour for the Australians, a hugely important point in their history. It was the first time they and the New Zealanders formed their own army corps rather than being integrated into British units."

In the village of Bouzincourt, a spiral staircase leads from the church into a 16th-century labyrinth of man-made caves that contains graffiti so clear it might have been written yesterday.

Researchers have found helmets, rifles, bullets and bully-beef tins left by British and Commonwealth soldiers who sheltered here from the German guns during the 1916 Battle of the Somme.

"We have recorded 2,100 names," said Jean-Luc Rouvillain of the Bouzincourt Heritage Society. "I think the soldiers left these messages so that one day their children or grandchildren would come and see them."

That is now happening. Rouvillain said more and more descendants of soldiers have been coming to visit the caves in recent years.

There is grim humor in the declaration "Here's Joy Forever" scrawled on the wall, and regimental pride in a poem by a soldier from the Highland Light Infantry which starts with the line: "Halt the Greys, Steady the Bays and let the HLI march past."

One cave was turned into a chapel with a small cross carved into the rock. Next to it, the words "Welcome Home" are written.

Private McAlpine, service number 4612, from the 2nd Battalion of the Highland Light Infantry, survived three wounds and the Battle of the Somme. But he died on July 16, 1917, aged 20. He lies buried in Woburn Abbey Cemetery in Cuinchy, 60 kilometers (37 miles) to the north.

Prilaux said there were marked national differences in the types of inscriptions. The French and Germans rarely recorded their names on the walls. Some of the French inscriptions and bas-reliefs were quite beautiful, such as a spectacular bust of Marianne and an entire chapel carved into the walls in a limestone quarry at Confrecourt.

German inscriptions, by contrast, tended to be more functional and were often infused with propaganda, he said. "There is a lot about national glory or just very functional signage."

Perhaps curiously, though, amid all the slaughter raging in the trenches above, one element is absent from the inscriptions. "There is no hatred in these inscriptions and sculptures," said Rouvillain, whose family has lived in Bouzincourt for centuries.

The ordinary soldiers on both sides, it seems, were aware that they were all going through the same hell.

Work is underway to preserve the fragile inscriptions for posterity. At Naours and Bouzincourt, all the names have been logged in databases. In Naours, a museum dedicated to the graffiti there will open in spring 2020.

The universities of Amiens and Lille have launched research projects and there are plans to invite students from around the world to study the graffiti up and down the Western Front. In addition, Prilaux has obtained funding to provide detailed 3D computer renditions of caves and their precious messages.