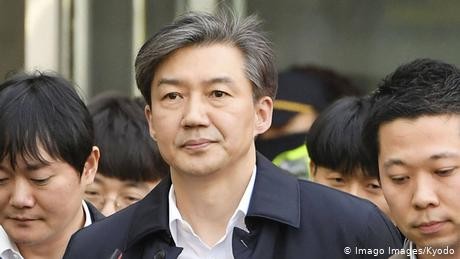 South Korea's former justice minister Cho Kuk on Tuesday was indicted on a dozen charges linked to family investments and university admissions for his children.

Prosecutors said a 6 million-won ($5,183, €4,623) scholarship that Cho's daughter received from her medical school professor could be seen as a bribe considering Cho was a presidential aide who could influence the professor's appointment as a public hospital chief.

Investigators said the pair forged internship certificates or asked others to issue such "fake" documents.

The couple is also alleged to have used false-name accounts for stock investments and deliberately misreported the value of their assets.

They are also accused of attempting to tamper with evidence, such as documents and a computer hard disk, as the probe progressed.

Cho stepped down in October after just one month in office — causing a major embarrassment for Moon as the former legal scholar was one of his closest political allies and considered by some as a potential presidential successor.

Moon came to power in 2017 promising to clean up corruption after weeks of large street protests led to the impeachment of predecessor Park Geun-hye.

Smaller demonstrations have erupted against the president on a scale not seen since the impeachment, hitting Moon's public support ratings.

Moon's office called the investigation result "meager" and said it would deepen people's distrust of the prosecutors.

"The investigation shook the president's authority," said Yoon Do-han, Moon's press secretary. "The result raised questions about the intent of the investigation."

Cho will remain free as he stands trial. Chung, who is also a university professor, was arrested in October on the same charges.

South Korea's Yonhap news agency cited Cho's lawyer, Kim Chil-joon, as saying that prosecutors had handed down "a political indictment based on their imagination and fiction."

Last week, a South Korean court rejected demands by prosecutors in a separate case to arrest Cho over fears he may skip the country.

Investigators claimed that Cho, while serving as Moon's senior secretary for civil affairs in 2017, abused his power by blocking a government inspection into corruption allegations surrounding a former Financial Services Commission director-general, another official close to Moon's ruling party.