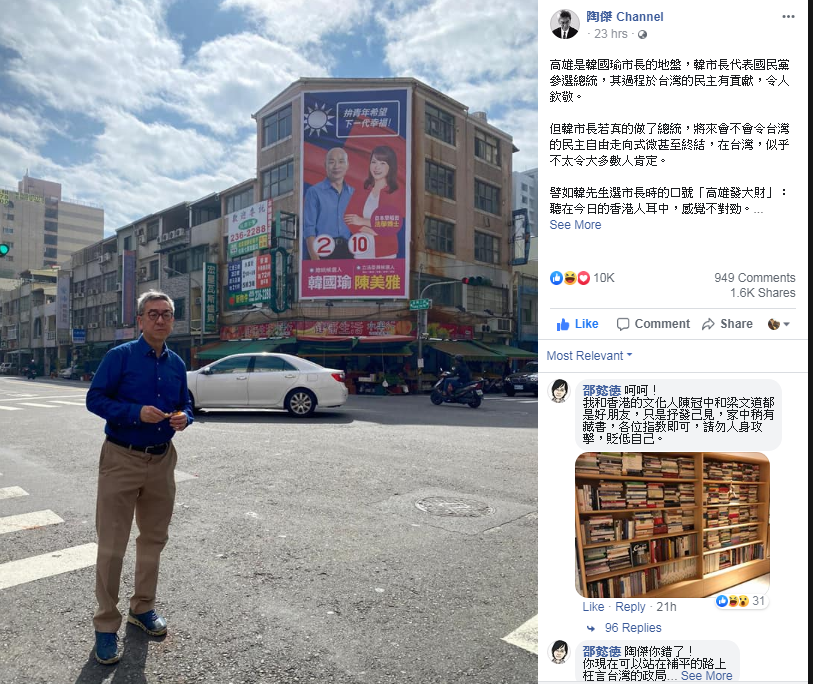 TAIPEI (Taiwan News) — A renowned Hong Kong columnist on Monday (Dec. 30) lamented over what he says has been going on in Hong Kong and warned that Kaohsiung, and Taiwan as a whole, could meet the same fate if it opens its arms wide to Chinese investment as the KMT presidential candidate advocates.

With no profound economic theory, Han's catchy slogan "people will come, goods will go out, and Kaohsiung will become rich" (貨出得去、人進得來，高雄發大財) gave those on the lowest rungs of society hope and attracted many loyal "Han fans," Tsao said.

However, in Hong Kong's case, it has turned out to be only a small number of people who got quick rich — from the housing market and skyrocketing property prices — and wages for graduates have remained stagnant, he observed.

Tsao proceeded to attack Han's theory, saying his solution to revive Kaohsiung's economy is short-sighted and would lead to a huge disparity between the rich and poor, as is the case in Hong Kong today, which has reached its greatest level in 45 years.

In addition to the wealth gap, Hongkongers are also paying the price of freedom and dignity, said the well-known political commentator. "Is this really what Kaohsiung people want?" he asked.

Tsao also criticized Han's optimism about cross-strait relations, saying he could not figure out how Han could promise "harmonious relations" with China given that Chinese leader Xi Jinping has made clear his dismissal of the 1992 Consensus and stated that the communist regime would only accept "one country, two systems" in Taiwan as in Hong Kong and Macau.