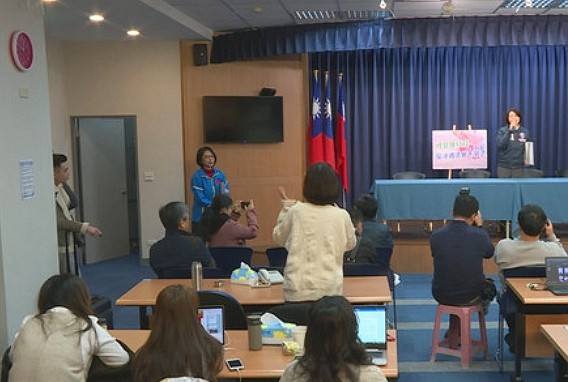 The Anti-Infiltration Bill, which is aimed at preventing political interference by foreign powers, was scheduled to be put to a vote at the Legislative Yuan Tuesday afternoon. At a press conference held by the KMT, former Taipei County chief Chou Hsi-wei (周錫瑋), Cultural and Communications Committee Director-General Cheng Mei-hua (程美華), and KMT spokesman Wang Hung-wei (王鴻薇) voiced their protest against the new law.

Wang pointed out that Sanlih E-Television, which is known to favor the Democratic Progressive Party (DPP), has sold many of its drama series to China and has a vast business network in the communist country. She said that she worried the Taiwanese TV agency would go out of business once the Anti-Infiltration Bill takes effect, reported New Talk.

A reporter from Sanlih E-Television, who was present at the scene, stood up and questioned whether the KMT members had read through the new regulation. She added that the Anti-Infiltration Bill is used to regulate political influence originating abroad, not to limit the business opportunities of Taiwanese companies, reported Liberty Times.

The reporter proceeded to ask the politicians for evidence supporting their accusation of Sanlih's involvement with the Chinese Communist Party (CCP). Wang responded that the TV agency should not worry because the DPP will have a double standard if it wins the January election, and she left the conference before the reporter could pose further questions, according to CNA.