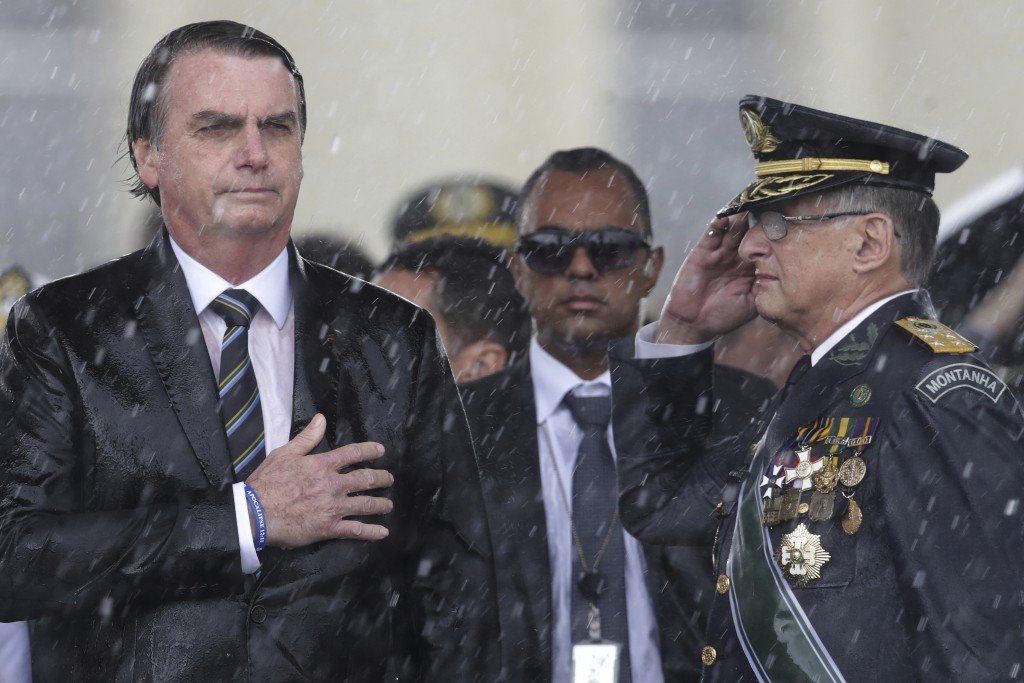 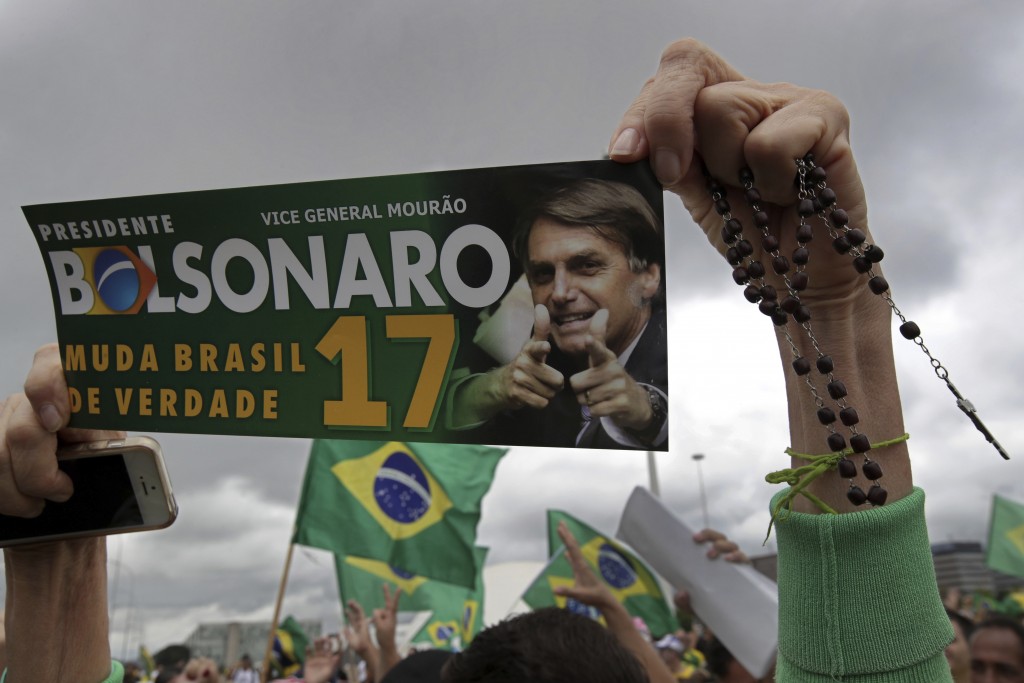 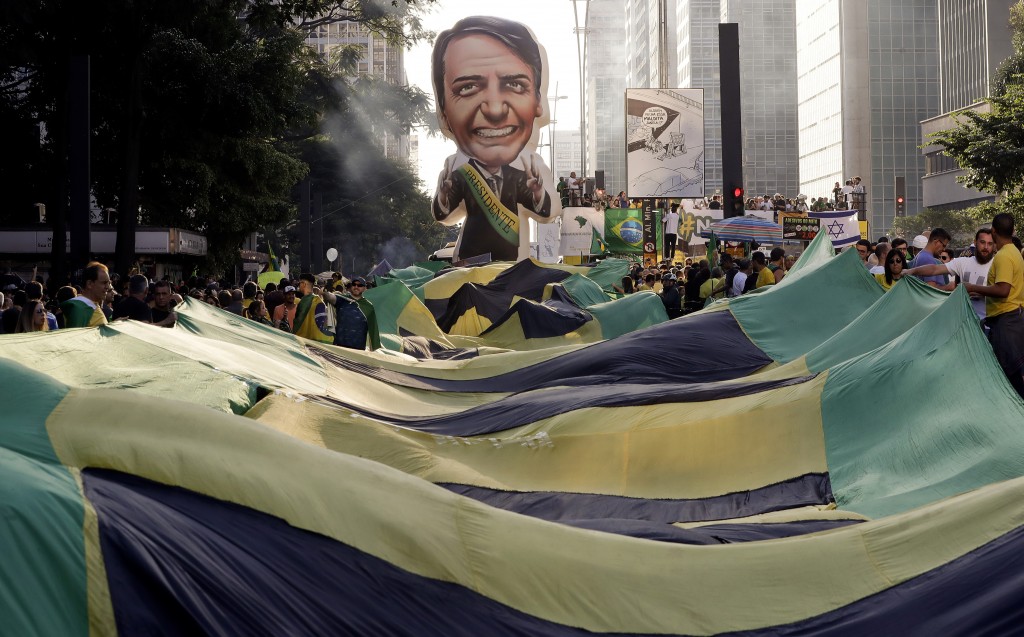 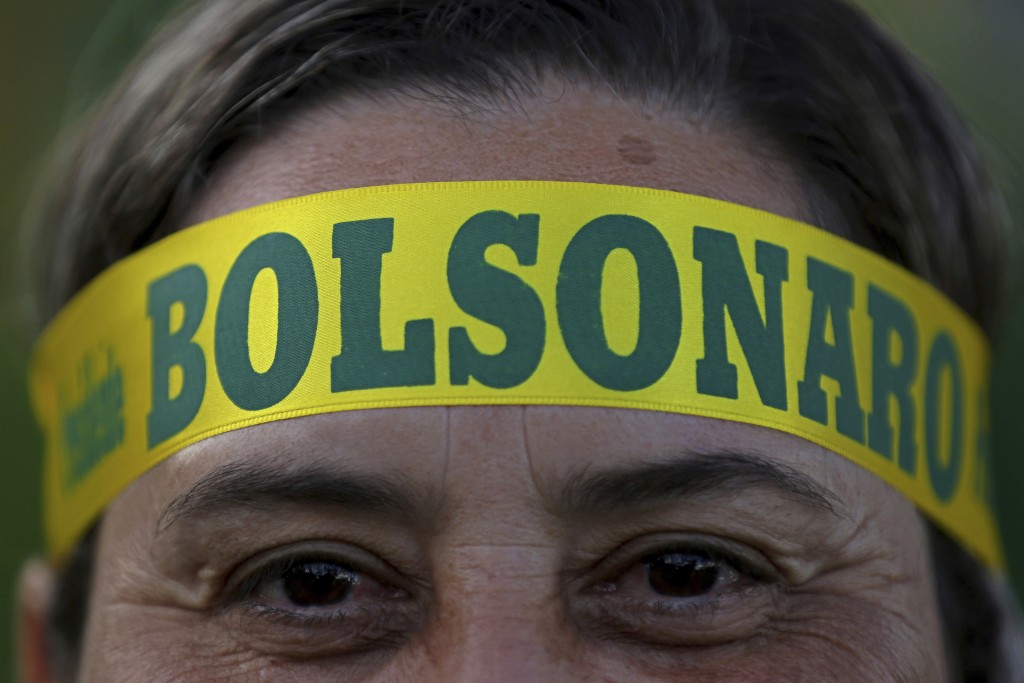 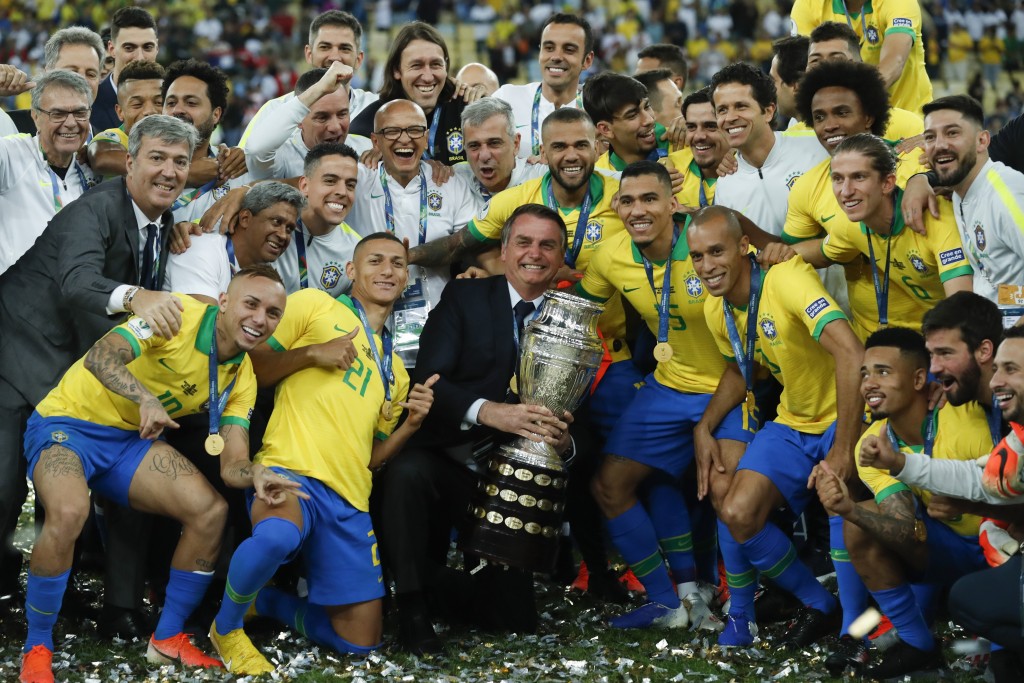 SAO PAULO (AP) — Heading into his second year as Brazil's president, Jair Bolsonaro has held firm to his combative culture-warrior policies while feuding with critics at home and abroad — an approach that has thrilled many supporters while eroding his efforts to win allies and lift the world's 9th largest economy out of its doldrums.

Bolsonaro's inauguration last Jan. 1 marked a dramatic break from the previous four elections, all won by the left. He vowed to attack the socialist ideology, stamp out corruption and unleash police against crime. As he did that, many moderates felt pushed away.

In a national address just before Christmas, Bolsonaro said he “took over Brazil in a deep ethical, moral and economic crisis."

“The government has changed. Today we have a president who cherishes families, respects the will of its people, honors its military and believes in God," he said, flanked by his wife Michelle Bolsonaro, who wore a shirt with JESUS written in large letters.

And he has backed up that stand in deeds — such as stripping some human rights protection from LGBT people and cutting funding for arts projects that challenge “Christian values" — as well as in words, inveighing against flamboyant carnival celebrations.

Marcos Feliciano, a conservative lower house lawmaker and evangelical pastor, believes Bolsonaro keeps true to values that were ignored by his predecessors.

“At the start of the year, we clearly felt sectors within the government trying to separate the president from the evangelicals, but the president pushed those people away and stayed loyal to those who elected him. Evangelicals were never as honored by a president,” he said.

Long a fringe lawmaker, Bolsonaro became president as an outsider following a deep economic crisis, a sweeping scandal over political corruption and amid a wave of populist triumphs around the planet.

But Bolsonaro's focus on a far-right cultural agenda generated infighting between military appointees and evangelicals within the administration and whittled away his support in Congress.

While U.S. President Donald Trump, to whom Bolsonaro is often compared, has cemented authority over his Republican Party, Bolsonaro's spats with his own party's leaders led him to quit it in November. That leaves him effectively isolated until, and if, he can create his new party Aliança Pelo Brasil (Alliance for Brazil).

“Bolsonaro started 2019, which was supposed to be his honeymoon year, in positive territory, but he will start his second year in the negative," said Carlos Melo, a political science professor at Insper University in Sao Paulo. “He will be under a lot of pressure. And that puts him in fighting mood.”

But he'll need allies to pass some of his cultural agenda through congress. He will also need lawmakers to approve new reforms aimed at slashing costs in efforts to revive an economy that has seen six straight years of negative or stagnant growth.

Bolsonaro's most ambitious legislative win, an overhaul to Brazil's pension system that prior governments failed to achieve, came on a watered down version.

Measures still pending include tax reforms and spending caps, some of which will be controversial as the parties head toward a test of strength in a series in October mayoral elections. Lawmakers will be involved with the vote from June to the beginning of November.

Bolsonaro also has feuded with other international leaders — notably the leaders of France, Germany and the government of Norway over their efforts to protect the Amazon rainforest, a region he sees as key to Brazil's future and where deforestation accelerated in his first term,

That has caused unease even among agribusiness leaders who voted for Bolsonaro, such as “soy king” Blairo Maggi, who have said the president's handling of the environment jeopardizes Brazil's exports.

Poor economic results and aggressive rhetoric have turned off many Bolsonaro voters, and only about 30 percent rate his government good or excellent — the lowest first-year performance for an elected president since the 1985 return to democracy.

But given the choice to simply approve or disapprove of Bolsonaro, the polls show his popularity runs higher — roughly on a par with that of Trump in the U.S. “This is not a weak president,” said Christoper Garman, managing director for the Americas at Eurasia Group.

Police figures compiled by website G1 show homicides fell 22% to 30,864 cases in the first nine months of the year, compared to the same period in 2018.

Meanwhile, Bolsonaro has also been bothered by investigations into his family that could shake his image of incorruptibility among hard-core supporters.

Prosecutors are investigating allegations staffers working for his son Flávio, then a Rio state lawmaker, kicked their salaries back to his former driver, a long-time friend of the Bolsonaros.

The 2020 local races could be telling for Bolsonaro's re-election bid in 2022, according to Claudio Couto, a political science professor at the Getulio Vargas Foundation.

”If Bolsonaro fails to get his own party in time he will have to build alliances with politicians of other parties so they can carry his banner. It could be a hard task for a politician that has had trouble in building bridges," Couto said.