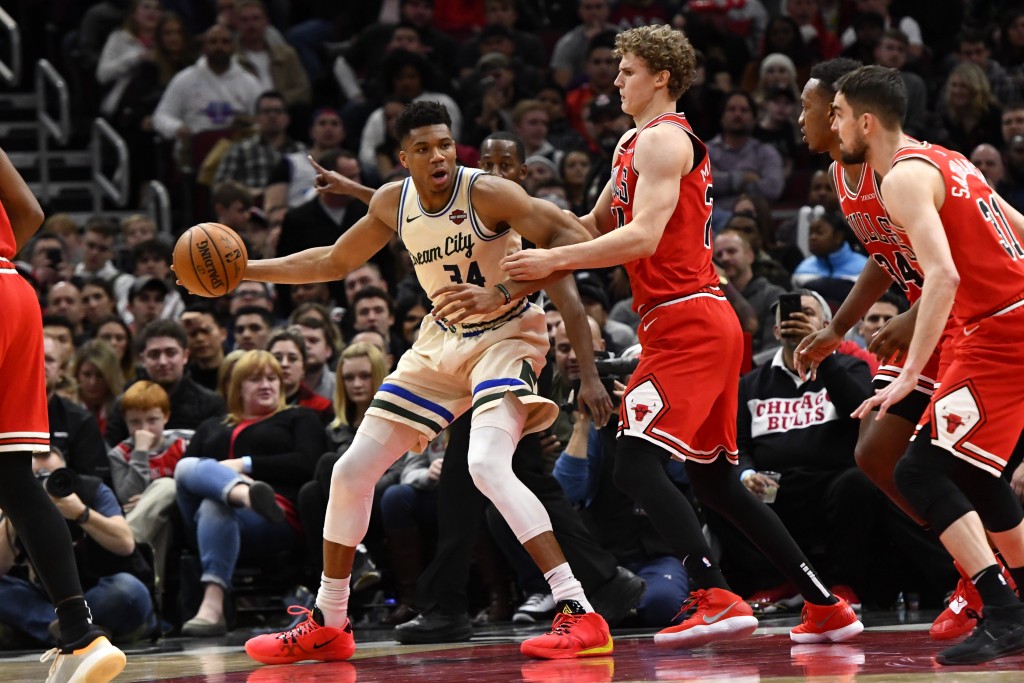 CHICAGO (AP) — Giannis Antetokounmpo had 23 points and 10 rebounds after missing two games with a sore back, and the Milwaukee Bucks pulled away in the second half for a 123-102 victory over the Chicago Bulls on Monday night.

Antetokounmpo, the NBA's second-leading scorer with an average of 30.5 points per game entering this one, played only 27 minutes and sat out the final 5 1/2 because of the lopsided score. He was 8 for 14 from the field with six assists.

Khris Middleton scored 25 points for the Bucks and Eric Bledsoe had 15 points in 16 minutes after missing the previous eight games with a fractured right leg. Milwaukee improved to a league-best 30-5.

Zach LaVine scored 19 points for the Bulls but shot just 7 for 23 from the field.

With the Wizards (10-22) minus All-Star shooting guard Bradley Beal and five other key members of their rotation, they got huge contributions from an unexpected trio. McRae, a third-year player, Mathews, in his 11th NBA game, and Mahinmi, a 13-year veteran, enjoyed nights to remember against Miami (24-9), which had its five-game winning streak snapped. The Heat entered with the second-best record in the East and lost for just the third time in 20 games against conference opponents.

The Timberwolves had lost 12 of 13 and were again without injured Karl-Anthony Towns and ill Andrew Wiggins. Gorgui Dieng started in Towns' place and had 11 points and 20 rebounds. It was Minnesota's first home win since Nov. 13.

Spencer Dinwiddie scored 36 to lead the Nets, who have lost three straight.

Playing without injured guard Trae Young (ankle) for the second straight game, the Hawks trailed by 18 during the first half but rallied in the third quarter. Alex Len scored eight of his 18 points to fuel a 15-4 run, while Atlanta’s defense yielded only six field goals in the period. Len’s drive and dunk just before the horn gave the Hawks a 74-72 lead, and they pulled away near the midpoint of the fourth with an 11-0 run.

Atlanta had been on its second 10-game losing streak of the season. This one ended with the Hawks' second win in two tries against Orlando.