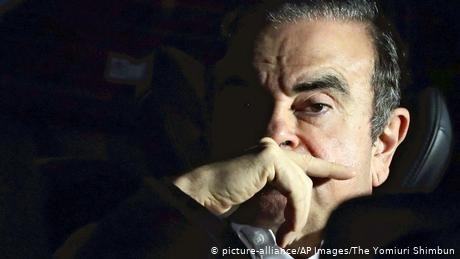 Disgraced businessman Carlos Ghosn said Tuesday he had escaped Japan and arrived in Lebanon, raising questions about how he fled months before trial.

"I have not fled justice, I have escaped injustice and political persecution," the former Nissan chief said in a statement, just hours after multiple media outlets reported he had fled Japan.

The former head of carmakers Renault and Nissan was due to face trial in 2020 on charges of financial misconduct in Japan.

The 65-year-old was previously lauded for reversing Nissan's fortunes, reaching a celebrity status in Japan and even appearing as a protagonist of a manga, a Japanese comic book. His fall from grace sent out shockwaves across Japan and the global car industry.

Japanese authorities arrested Ghosn on charges of financial misconduct in November 2018. Prosecutors believe Ghosn syphoned off millions of Nissan's funds for his own use and deceived shareholders about the size of his salary while serving as the company CEO.

The executive has rejected any wrongdoing. He claims to have been the victim of a boardroom coup and has accused some of his Nissan colleagues of "backstabbing" him in order to avert a closer alliance between the Japanese company and Renault. His lawyers have sought to dismiss all charges, describing them as a result of a conspiracy between Nissan executives, government officials and prosecutors.

Ghosn was released from jail on a 1 billion yen (€8.2 million/$9.2 million) bail in April. A Tokyo court said his movement and communications were closely monitored to prevent escape.

It was not immediately clear how Ghosn managed to evade the terms of his house arrest and flee to Beirut.

After landing in Lebanon, Ghosn said he would not be "held hostage by the rigged Japanese justice system where guilt is presumed."

However, he did not provide details on his escape.

Ghosn was born in Brazil to a family with Lebanese roots. He grew up in Beirut and speaks fluent Arabic. He holds French, Brazilian and Lebanese passports

Read more: Who is the man who could bring down Japan's auto industry?

Many Lebanese politicians spoke out in favor of Ghosn after his arrest. The businessman remains popular in the Middle Eastern nation, where some hope to see him run for a government post.