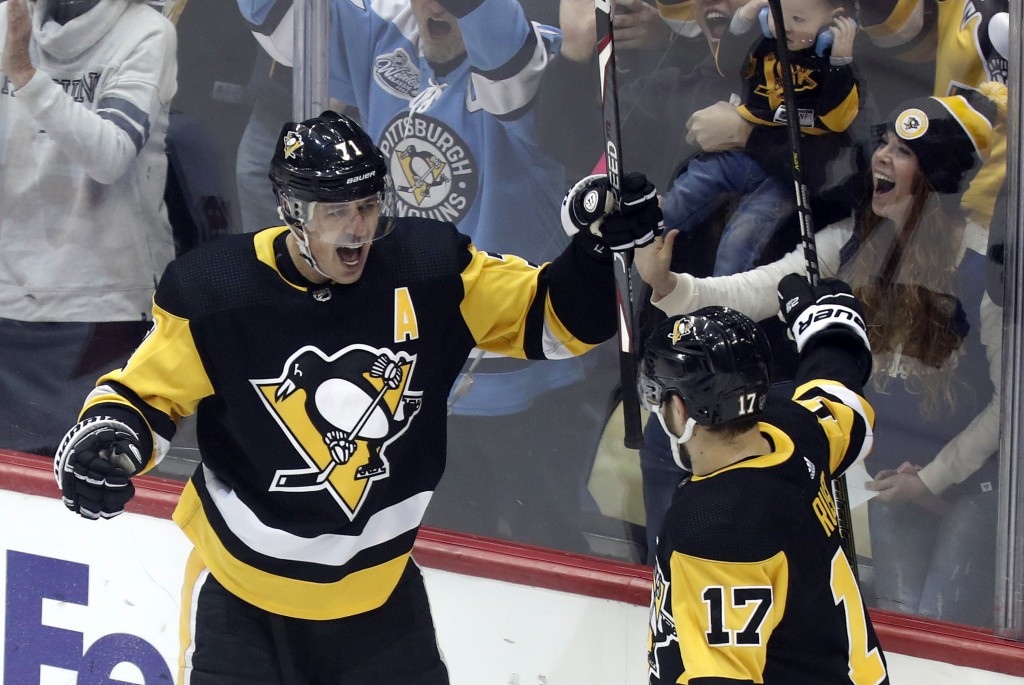 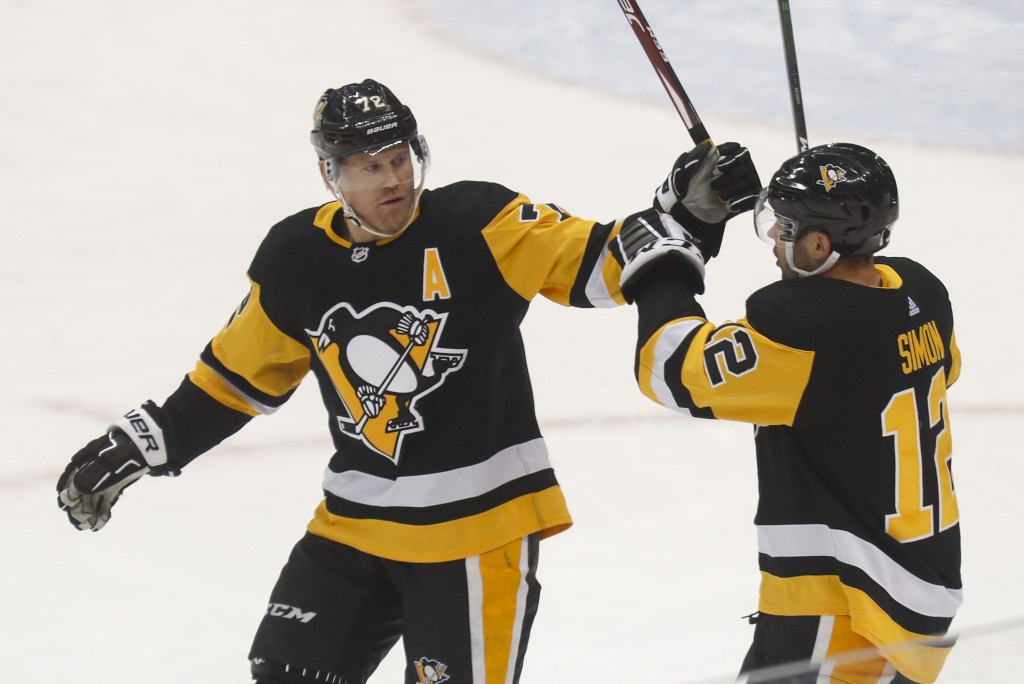 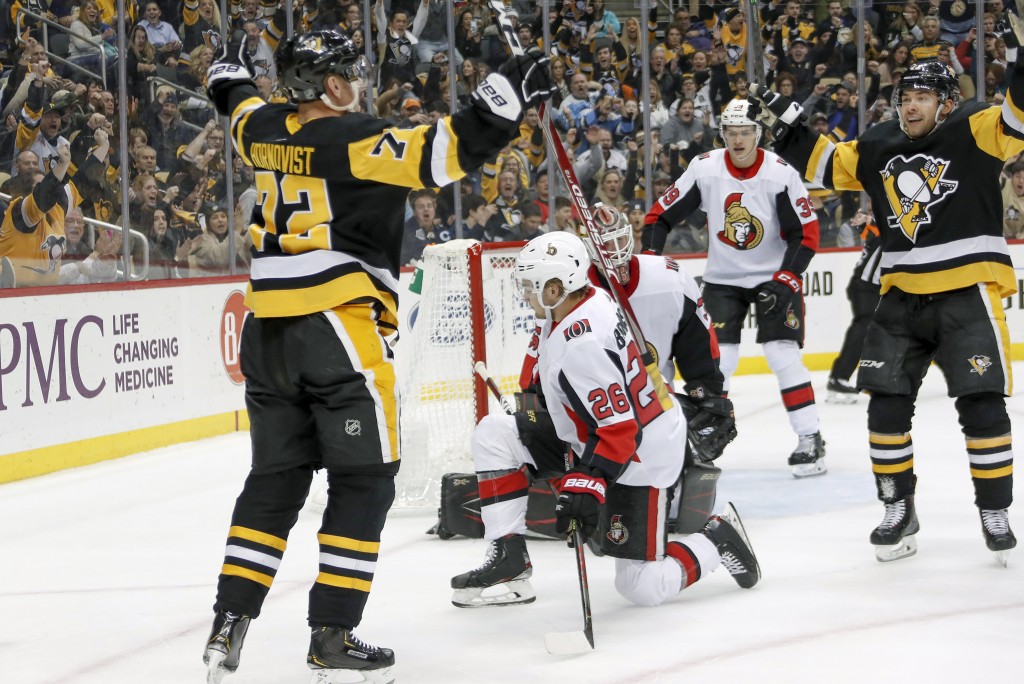 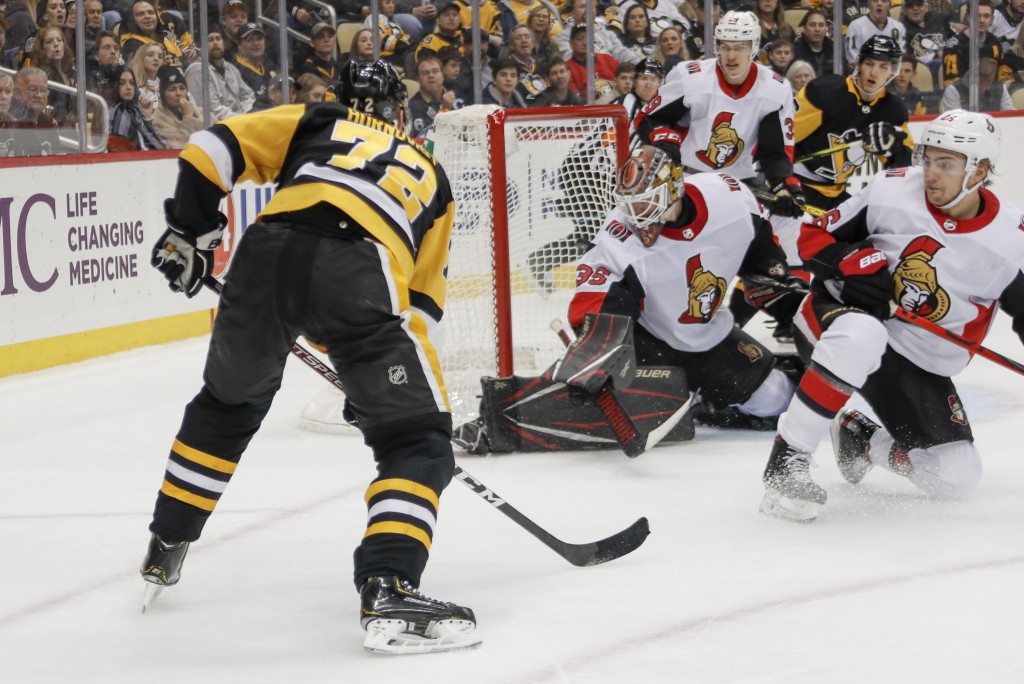 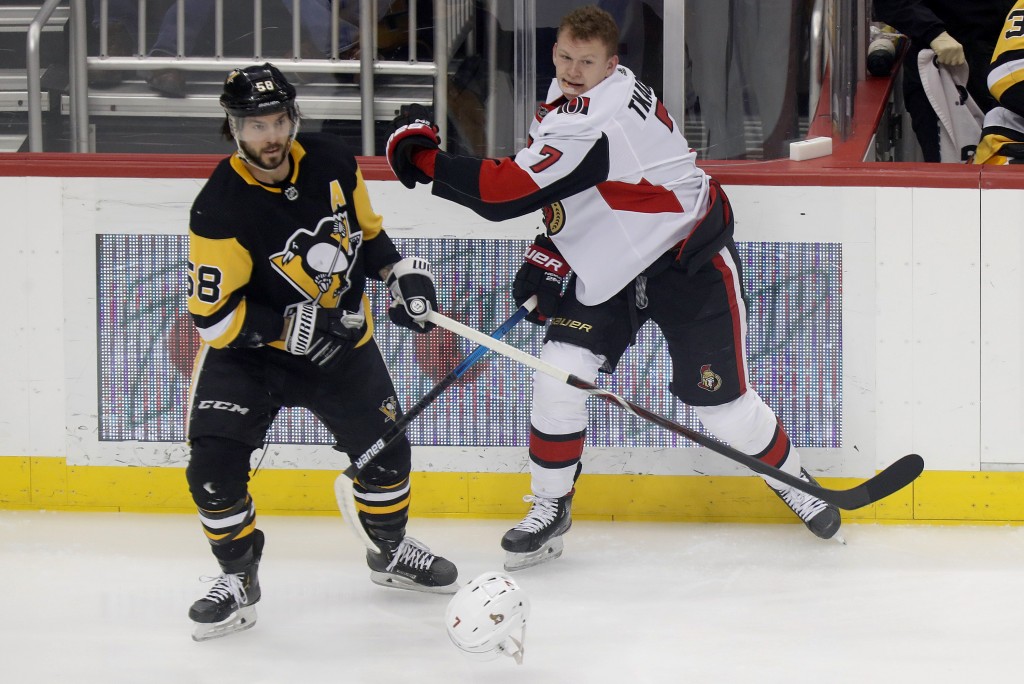 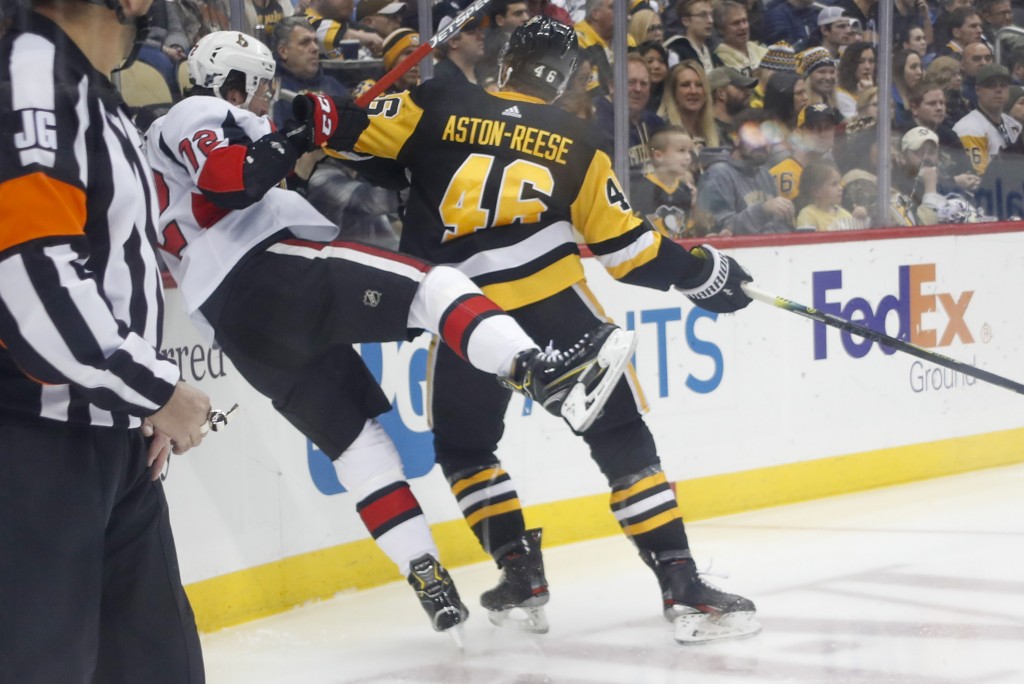 PITTSBURGH (AP) — Evgeni Malkin had two goals, Jake Guentzel was injured right after scoring his 20th of the season and the Pittsburgh Penguins beat the Ottawa Senators 5-2 Monday night.

Malkin stretched his points streak to six games and has seven goals and 24 points in his past 13 contests.

Guentzel had a three-point night but left after scoring 6:55 into the third period. Guentzel tapped one into a partially empty net off Malkin's feed but crashed hard into the wall right after. He immediately went to the dressing room after getting his 200th career point.

Patric Hornqvist and Dominik Simon also scored the Penguins, who have won three straight and 10 of 12.

Tristan Jarry stopped 24 shots to win his sixth straight game. He has won eight of his last nine starts and allowed no more than two goals in 14 of 18 appearances this season.

Nick Paul scored twice for the Senators, who ended a five-game points streak. Paul has three goals in his last two games.

Marcus Hogberg made 28 saves for the Senators.

Pittsburgh has won 14 of 22 games without captain Sidney Crosby, who has been out since November because of core muscle surgery. Crosby has recently started skating.

Malkin opened the scoring 27 seconds into the game when he beat Hogberg with a glove-side wrist shot during a 2-on-1. Guentzel assisted, giving him points in four straight. Guentzel has 12 goals and 29 points in his last 20 games.

Simon gave Pittsburgh a 2-0 lead at 11:44 of the first period. Simon was under pressure when he took a cross-ice pass and flipped a backhander past Hogberg from the side of the crease. It was his second goal in three games.

Paul scored at 4:21 of the second period for the Senators to make it 2-1, but Malkin regained Pittsburgh’s two-goal advantage 1:41 later. Bryan Rust, who had the primary assist, has points in eight of his last nine games with seven goals and 15 points during that span.

Paul scored his second goal for the Senators at 15:58 of the second, but again, Pittsburgh immediately answered. Hornqvist scored 53 seconds after Paul’s goal to give Pittsburgh a 4-2 lead entering the third period.

NOTES: Pittsburgh’s 16 home wins are the most in the NHL. The Penguins have 12 wins and points in 14 of their last 15 home games. ... Guentzel has points in 12 of his last 13 home games. He has 10 goals and 22 points during that span. ... Ottawa D Ron Hainsey, who won a Stanley Cup with Pittsburgh in 2017, missed his fourth straight game with a lower-body injury. ... Pittsburgh D Justin Schultz missed his fifth straight game with a lower-body injury.