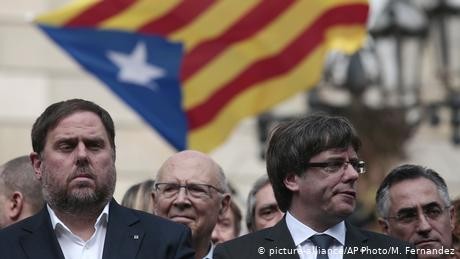 Spain's state attorney called on Monday for the release of Catalan separatist leader Oriol Junqueras from prison, weeks after the European Court of Justice (ECJ) ruled he has parliamentary immunity.

Junqueras was imprisoned along with other Catalan separatists for their role in organizing an unauthorized Catalan independence referendum in 2017. However, the ECJ recently ruled that as he was elected to the European parliament he should have parliamentary immunity from prison.

Responding to the ruling on Monday, Spain's state attorney said Junqueras should be allowed to leave prison to take up his seat. But it also ruled that a request should be made immediately for the EU assembly to drop the separatist politician's immunity so that he would serve the 13-year prison term for his role in the unauthorized referendum.

In the ECJ's December ruling, the court said that the Spanish courts should have requested the EU parliament to drop his immunity if they wanted to stop Junqueras from traveling to the EU parliament.

EU parliament approval is unlikely as it would require an almost impossible consensus among the 750 European lawmakers.

Spain's Supreme Court is expected to reach a decision on Junqueras' release in the coming days.