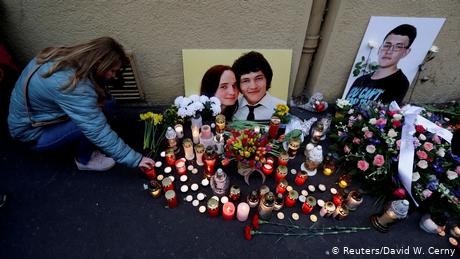 A 42-year-old man received a 15-year jail sentence in a plea deal on Monday for facilitating the murder of Slovak investigative journalist Jan Kusiak in 2018, a court spokeswoman said.

It was the first sentence so far handed down in the trial over the fatal shooting of Kuciak and his fiancee Martin Kusnirova, both aged 27, at their home near Bratislava. The case triggered mass protests over corruption in Slovakia, and Prime Minister Robert Fico was forced to resign.

The sentenced man, Zoltan Andrusko, would have faced life imprisonment if he had not confessed and acted as a witness. His 15-year-sentence is longer than the 10 years he had agreed with prosecutors, as the court felt a longer prison term better served the cause of justice to all involved. Andrusko accepted the decision, the court said.

Four other people are on trial over the killings, including a businessman whom Kuciak was investigating in the course of his work over connections between organized crime and politics in Slovakia. All of them have entered pleas of not guilty and face possible life sentences if convicted.

The case puts judicial independence in Slovakia to the test, with investigations bringing to light links between the businessman, Marian K., and police and public officials. Prosecutors have accused K. of ordering the killing.

The main trial against the four remaining defendants is scheduled for early January.