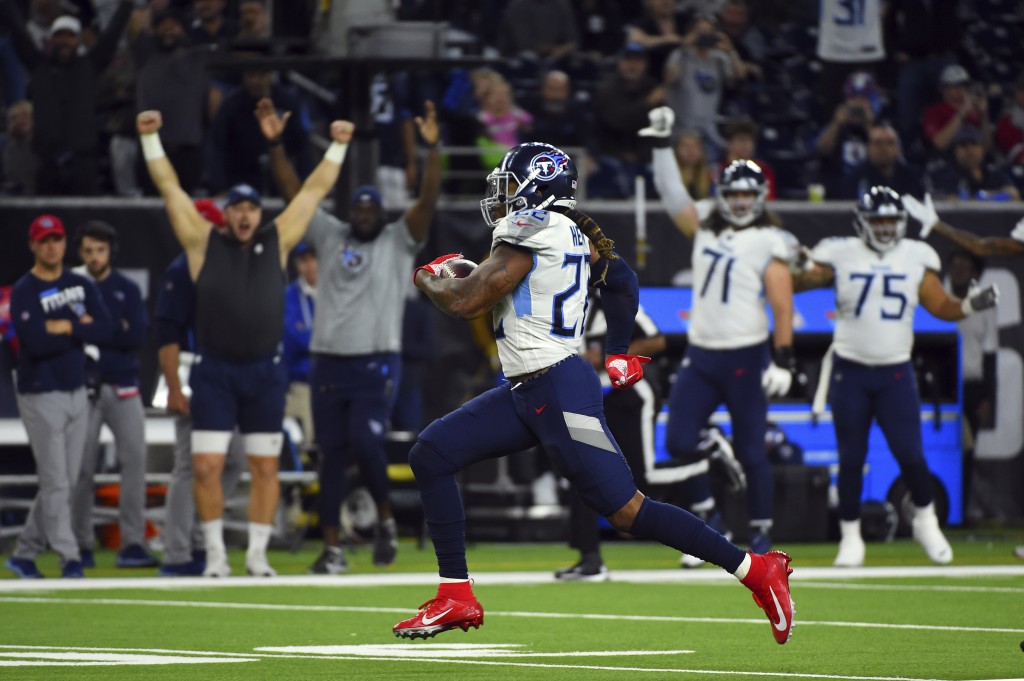 NASHVILLE, Tenn. (AP) — Mike Vrabel making his head coaching debut in the postseason against the team he won three Super Bowl rings with in New England will be the topic of the week.

A big reason the Titans are even in the playoffs with Vrabel getting the chance to face off against Bill Belichick and his friend Tom Brady is their very high-powered offense.

The Titans (9-7) clinched the AFC's No. 6 seed and the second wild-card slot with the NFL's rushing leader in Pro Bowl running back Derrick Henry and Ryan Tannehill, who came off the bench in mid-October after being traded away by Miami in March to lead the league with a career-high 117.5 passer rating.

Tennessee ranks fourth in the NFL, averaging 6.1 yards per play on fewer plays than Dallas, Kansas City or Baltimore.

Tannehill, who also led the league averaging 9.59 yards per pass attempt, said the Titans have weapons starting with Henry and the offensive line out to their receivers and tight ends.

“We have a bunch of guys that are talented and can make big plays for us, so it’s tough to really kind of key in one person or one group," Tannehill said. "We have talent across the board that we feel good about.”

Henry's return to the offense after a game off to rest his left hamstring showed just how dangerous Tennessee can be as the Titans finished with 467 yards total offense. They topped 400 yards six times this season for the first time since the Run ‘n’ Shoot days of 1991 for this franchise. They finished with 5,805 yards net offense — fourth in team history and the most since 1991.

The Titans had five plays of 23 yards or longer in their 35-14 win in Houston. Henry's 53-yard run to become the NFL's rushing leader for 2019 just edged out a 51-yard touchdown pass from Tannehill to rookie A.J. Brown. They also went smash-mouth at one point, running on all 10 plays of a TD drive in Houston.

“It just speaks volumes for us as an offense what we were able to accomplish as a whole,” Henry said.

Tackling. The Titans allowed only 14 points to Houston's backups, but the touchdowns came on drives of 15 and 16 plays apiece. The Titans go into the postseason 12th in the NFL allowing 20.6 points a game.

Linebacker Harold Landry has turned in a career-best nine sacks in his second season. But he has been stuck there for the past four games. Luckily for Tennessee, rookie Derick Roberson has three sacks on 29 snaps over the past two games.

The Titans can only hope that four games out of the lineup have helped both wide receiver Adam Humphries (ankle) and cornerback Adoree' Jackson (foot) be available against the Patriots. Wide receiver Kalif Raymond missed the regular-season finale while still in the concussion protocol.

30.4 — The average points the Titans are scoring with Tannehill at quarterback. Tennessee now is 10th in the NFL in scoring offense, a huge jump from the middle of October when the Titans benched Marcus Mariota with the team 28th in the league, managing only 16.3 points a game. The Titans scored at least 35 points five times this season.

Nothing simple, but go to Foxborough and beat the Patriots to set up a divisional playoff game in Baltimore.