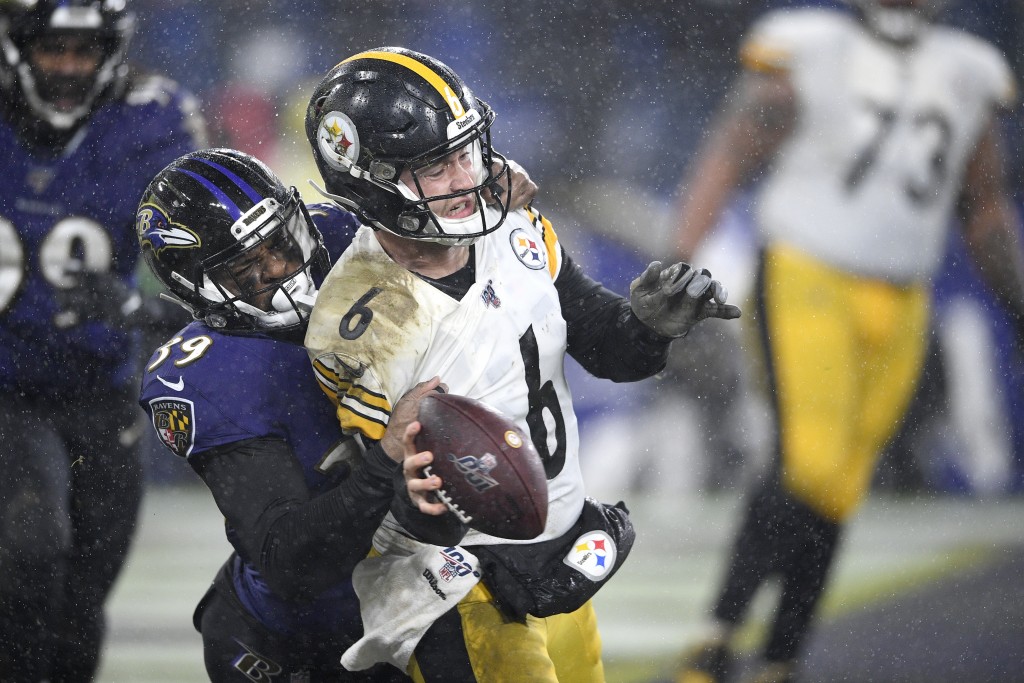 PITTSBURGH (AP) — The bottom didn't fall out, so there's that.

It typically does when teams lose their franchise quarterbacks early in the season.

Yet the Pittsburgh Steelers did more than just survive after Ben Roethlisberger grabbed his right elbow in pain late in the second quarter of a Week 2 game against Seattle.

The defense — boosted by safety Minkah Fitzpatrick's arrival in an audacious (by Pittsburgh standards) trade with Miami just hours after Roethlisberger's season officially ended — morphed into a ball-hawking group that led the NFL in takeaways. Outside linebackers T.J. Watt and Bud Dupree became one of the best pass-rush tandems in the league, combining for 26 of the Steelers' league-high 54 sacks. Rookie undrafted free agent quarterback Devlin “Duck” Hodges briefly achieved cult hero status by going 3-0 in his first three starts, winning over teammates and fans with his “aw shucks” bravado.

There was an 8-2 run following an 0-3 start, a stretch in which the Steelers kept finding ways to win despite their significant offensive limitations. Injuries to starting running back James Conner and wide receiver JuJu Smith-Schuster led the coaching staff to start plucking players off other teams' practice squads for help.

At times it looked as if Pittsburgh was doing it with smoke and mirrors. In a way, the Steelers were. They scored four defensive or special teams touchdowns, all coming in games they won by seven points or fewer.

When the “splash” plays that finished in the end zone evaporated — the last coming on rookie Diontae Johnson's electric 85-yard punt return for a score against Arizona in Week 14 — so did Pittsburgh's margin for error. Needing one win over their final three weeks to reach the playoffs, the Steelers came up empty. The smoke dissipated. The mirrors vanished. Hodges' bravado led to an avalanche of turnovers the defense couldn't overcome.

All of which leaves Pittsburgh's season open to interpretation. Did the Steelers overachieve by reaching .500 or better for a 16th straight season despite missing Roethlisberger — the second-longest active streak in the NFL — or did they underachieve because they missed a chance to reach the playoffs in a decidedly watered down AFC?

Probably a little bit of both. The midseason surge quieted critics who have long tied coach Mike Tomlin's coaching success directly to Roethlisberger's performance. Yet the offensive game plan over the final weeks — including the curious decision to have Hodges throw it 38 times against Buffalo — also hinted at an unwarranted overconfidence in the rookie's capabilities. The result is an 8-8 mixed bag that included some good, some bad and some blah.

“It’s tough,” defensive end Cam Heyward said. “Three weeks ago, I thought we had a real shot. It hurts. The hourglass is getting smaller and smaller for a lot of guys. This team won’t be the same. This season is over with. Guys leave. It's never going to be the same team.”

Maybe, but the majority of the pieces are in place for the Steelers to be in the mix in 2020 ... if Roethlisberger's surgically repaired right elbow can find the Fountain of Youth at age 38.

The Steelers traded up in the draft to make sure they grabbed inside linebacker Devin Bush with the 10th overall pick. Bush's 109 tackles set a franchise record for a rookie and he proved both durable and versatile, playing at least 60 percent of the snaps in 15 of 16 games. Johnson delivered on late wide receivers coach Darryl Drake's prediction by catching 59 passes — second-most by a rookie in club history — and solidifying the return game. Dupree was dominant in a contract year, becoming a weekly game-wrecker and setting himself up for a massive payday this spring. Kicker Chris Boswell bounced back from a miserable 2018 to make 29 of 31 field goals.

Conner and Smith-Schuster struggled to make a consistent impact, leaving offensive coordinator Randy Fichtner with little to work with on a weekly basis. Conner finished with just 464 yards rushing while being limited to 10 games by shoulder and quad injuries. Smith-Schuster wasn't the same after injuring his left knee in a loss to Cleveland in mid-November. Both players are entering the final season of their rookie deals in 2020, a time when the Steelers typically like to lock up promising pros to long-term contracts. Conner's inability to stay healthy leaves his future murky at best, while Smith-Schuster's quiet year potentially cost him millions at the bargaining table.

Neither Mason Rudolph nor Hodges made a compelling case that they're the heir apparent to Roethlisberger. Rudolph's uneven season included getting knocked out on his feet against Baltimore in October, fighting Cleveland's Myles Garrett in November before getting benched in favor of Hodges. Hodges' forever etched himself in team lore with his storybook beginning but his mistakes over the final three weeks highlighted why he was passed over in the draft despite setting an Football Championship Subdivision record for career yards passing at Samford.

HOW TO GET IT RIGHT

Roethlisberger assured an anxious fan base on Christmas Day he would be back next year. If he can somehow recapture the form he showed in 2018 — when he won the league's passing title — Pittsburgh could mount a threat to AFC North champion Baltimore. That's a massive "if."

The defense is good enough to keep the Steelers hanging around contention either way, though there will be a need at outside linebacker should Dupree move on in free agency. Though Tomlin should be lauded for his ability to keep the team afloat, if he's being judged strictly on his “the standard is the standard” mantra, then anything less than a playoff berth in 2020 could turn the heat up a tad on what is typically one of the most secure jobs in the league.