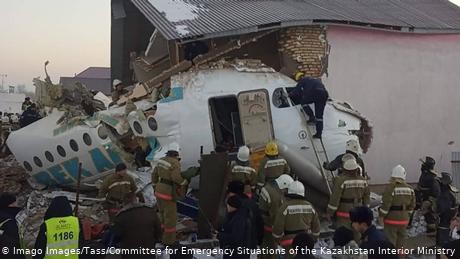 Kazakh airline Bek Air, whose plane crashed near Almaty last week and killed 12 people, said that the accident might have been caused by wake turbulence, which is the turbulence that occurs when a plan is trailing closely behind another.

Bek Air chief executive Nurlan Zhumasultanov said the jet may have been cleared for take-off too soon, as it only took off a minute or two after the previous jet.

"In calm weather, wake turbulence persists for two to three minutes," he said.

Authorities are examining the possible causes of the crash, and have not yet ruled out pilot error or technical issues. The commission is set to send the black box, which contains key flight data, to Moscow to undergo further assessment. Kazakh Prime Minister Askar Mamin, who is leading the investigation commission, has ordered the group to present preliminary findings by January 10.

The Fokker-100 lost altitude and broke through a concrete fence before hitting a two-story building on Friday morning. In addition to the 12 killed, dozens were injured in the passenger jet crash. Fifty of the injured passengers were hospitalized following the crash. A total of 98 people were on the plane.

Bek Air has sinced ceased operations, and Kazakh media reports that a decision on whether the airline can resume flights will made on Jan. 10, the deadline for the presentation of the preliminary findings, at the earliest.