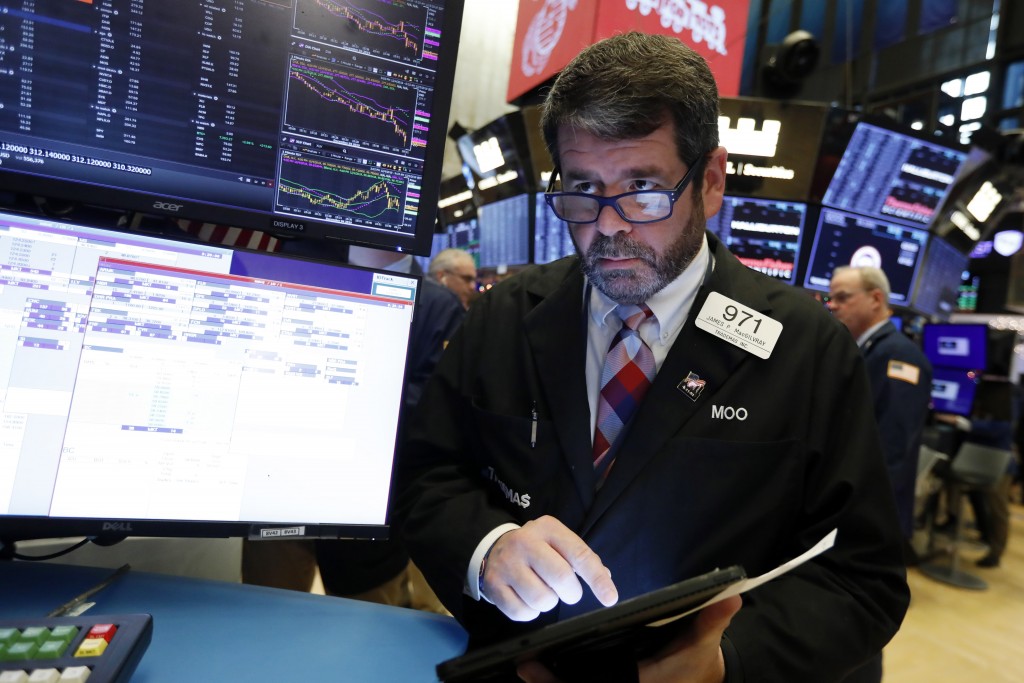 NEW YORK (AP) — Stocks are opening slightly lower on Wall Street in quiet trading at the beginning of another holiday-shortened week. Technology and communications companies were leading the way lower in early trading Monday. Applied Materials fell 1.1% and Facebook lost 1% The benchmark S&P 500 index is coming off five straight weeks of gains and a series of record highs. The S&P 500 fell 9 points, or 0.3%, to 3,229. The Dow Jones Industrial Average lost 81 points, or 0.3%, to 28,557. The Nasdaq composite fell 37 points, or 0.4%, to 8,967. Bond prices fell. The yield on the 10-year Treasury note rose to 1.92%.

Global shares were mixed Monday as Chinese benchmarks surged on expectations of lower financing costs following a policy decision by the country's central bank. Investors were awaiting updates on the signing of a trade deal between the U.S. and China and keeping a wary eye on North Korea.

The Shanghai Composite index jumped 1.2% to 3,040.02, lifted by expectations that a change in rules on lending will reduce funding costs. On Saturday, the People's Bank of China announced that as of January financial institutions should begin using a new loan-pricing system that will scrap the previous benchmark, which is at 4.35%, and use the loan prime rate, which is set at 4.15%. The loan prime rate was revamped in August. It reflects the reported loan rates from 18 major banks to their best clients. The change is meant to make lending more market-driven.

Adding to concerns over a possible rocket launch, at a meeting of the ruling Workers' Party, North Korean leader Kim Jong Un called for his military and diplomats to prepare unspecified “offensive measures” to protect the country’s security and sovereignty, the North’s state media said Monday.

Kim has set an end-of-year deadline for the U.S. to make major concessions to salvage a fragile nuclear diplomacy that hit a major setback at a summit meeting with President Donald Trump in Vietnam's capital Hanoi.

The plenary meeting of the party’s Central Committee, which began on Saturday, is being closely watched amid concerns that Kim could suspend his deadlocked nuclear negotiations with the United States and take a more confrontational approach by lifting a self-imposed moratorium on nuclear and long-range missile tests.

Still, as the market prepares to close out a strong year of gains next week, uncertainty remains over the final details of a “Phase 1” trade deal between Washington and Beijing, which U.S. officials say will be signed in early January. Details of the agreement have not been disclosed, and it's unclear how much impact it will have if the two sides are unable to resolve remaining differences. Next year also has the added complication of the U.S. presidential election.

“The main driver continues to be an apparent impending signing of the U.S.-China ‘phase-one' trade agreement in January and the ensuing boost to world growth that should follow. Whether that growth materializes or not, will be a story for another day," Jeffrey Halley of Oanda said in a commentary.

Looking ahead, factory data from China is one of the few likely market movers expected this week.

On Monday in Asia, benchmark U.S. crude oil rose 39 cents to $62.11 per barrel in electronic trading on the New York Mercantile Exchange. It gained 4 cents to $61.72 per barrel on Friday. Brent crude, the international standard, gained 60 cents to $67.47 per barrel.