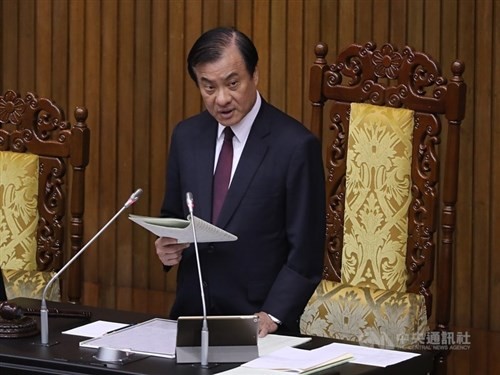 A government-initiated anti-infiltration bill is likely to be rammed through the Legislative Yuan Tuesday as the draft is set to be put to a vote in the ruling Democratic Progressive Party (DPP)-controlled legislature after a cross-party negotiation Monday failed to reach consensus on key articles of the act.

The draft bill, first initiated by the ruling Democratic Progressive Party (DPP) in late November, has been waiting in the Legislature since it passed its second reading Nov. 29.

The bill targets actions backed by foreign hostile forces such as illegal political donations, campaigning, lobbying, election interference, disruption of public order and the spread of misinformation, which are not covered by existing laws, according to the government.

The act prohibits political donations, lobbying and attempts to interfere with local elections under the instruction of or with the financial support of anyone affiliated with a hostile force. Violators will face a maximum seven-year jail sentence or a maximum NT$5 million (US$165,071) fine.

A hostile force is defined in the bill as any country or group at war or in a military standoff with Taiwan that seeks to jeopardize the country's sovereignty by non-peaceful means and is viewed as referring to China, although Mainland Affairs Council (MAC) Minister Chen Ming-tong (陳明通) said the bill applies to all foreign hostile forces.

After a month-long period for cross-party negotiations over the draft came to an end Sunday, the legislative caucuses of the DPP, the main opposition Kuomintang (KMT) and two smaller parties -- the People First Party (PFP) and the New Power Party (NPP) -- held another round of negotiations Monday in the hope of reaching consensus over all the articles of the bill.

Following hours of discussion, however, the parties managed only to agree on the name of the bill as well as its main purpose as being "to safeguard the Republic of China's sovereignty," but failed to reach consensus on other key parts of the 12-article bill.

During the negotiations, the KMT caucus had proposed that anyone who is approached, instructed or financed by a hostile force for the purpose of infiltration should report the issue to Taiwan's National Security Bureau (NSB) instead of the DPP's stance of banning such political donations altogether, as is the case in the current draft.

The proposal, however, was rejected by the DPP, with caucus whip Ker Chien-ming (柯建銘) saying that the KMT's proposal is like asking those who seek to infiltrate Taiwan to first apply to the authorities before doing so, which is "illogical" and not feasible.

KMT caucus whip Tseng Ming-chung (曾銘宗), meanwhile, accused the ruling party of failing to listen to the voices of the opposition parties. The KMT's view was backed by the PFP as its caucus whip, Lee Hung-chun (李鴻鈞), blasted the DPP for trying to ram the bill through.

The administration of President Tsai Ing-wen (蔡英文) has vowed to push the bill through the Legislature after the bill's third and final reading before Dec. 31, when the Legislature goes into recess.

Lee, however, suggested that discussion of the draft bill should resume sometime after the Jan. 11 presidential and legislative elections so that all parties involved can cool down to make room for rational discussion.

Legislative Speaker Su Jia-chyuan (蘇嘉全) later ruled that each of the four parties will be given an opportunity Tuesday during a plenary session to voice their opinions on the bill before it goes to vote later in the day.

The DPP argues that the bill is necessary to safeguard Taiwan's democracy from the increasing coercion and threats from China, while the opposition parties say that the bill could be used by the government to open the door to unsubstantiated accusations and thus pose threat to the 2 million Taiwanese working and studying on the other side of the Taiwan Strait.