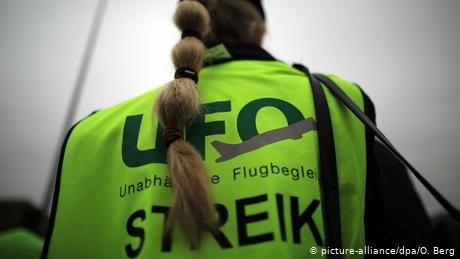 Having threatened strikes almost 24 hours earlier, but refusing to say when or for which airlines, the UFO trade union on Friday announced that its members working at Germanwings would stop work for 72 hours spanning New Year's eve.

Prior to UFO's strike call on Friday, Lufthansa management had said: "This is not the way to settle the conflict," adding that it anticipated scheduled arbitration in January.

Potentially affected over the three strike days would be 229 flights starting in Germany — flights allotted to Germanwings by Eurowings, according to estimates from the aviation portal AviationNetonline based in Vienna.

Around 30% of Eurowings' scheduled flights starting in Germany are still carried out by Germanwings, it said.

On Thursday, the German cabin crew union had already threatened to instigate another bout of strikes following what it called "failed" arbitration talks with Lufthansa last Sunday.

UFO had ruled out action by members over the Christmas period, but on Friday warned that larger-scale strikes might be announced around January 2 if there were "still no concessions."

Last month, Lufthansa was forced to cancel 1,300 flights due to strikes — after which the union initially agreed to refrain from further action pending talks.

Hagen Lesch, industrial relations expert at Cologne Institute for Economic Research told the Rheinische Post newspaper that "on both sides it seems much trust has been lost," adding that UFO seemed to need "more certitude that Lufthansa regards it as a negotiating partner."

In the past, Lufthansa has cast doubt on UFO's representation of cabin personnel and challenged its role to act as a trade union.

The Frankfurt-based UFO, which says its represents more than 30,000 members, has cited wage-rise demands, airline pension entitlements and rules on part-time work.