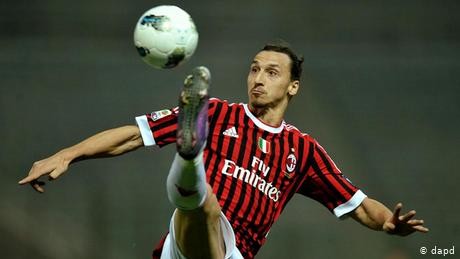 Officials at AC Milan said they were "delighted" to announce the return of Zlatan Ibrahimovic to the Italian club on Friday. The celebrated 38-year-old is set to start next week and stay on until the end of the season, with the option of prolonging his six-month contract for another year.

"I'm coming back to a club I hugely respect and to the city of Milan I love," Ibrahimovic was quoted as saying on the club's website.

The club teased Ibrahimovic's return with an online video tagged "IZ coming" — a play on the footballer's initials.

Ibrahimovic spent two seasons in Milan between 2010 and 2012, helping them win their last Serie A title in 2011. The Swedish star finished the 2011-2012 season as the top scorer of the league.

AC Milan has been struggling in recent years, currently sitting in 11th place in Serie A after a devastating 5-0 defeat against Atalanta from Bergamo.

'I will do everything'

On Friday, AC Milan said Ibrahimovic would aim to reverse the club's fortunes.

"I'll fight together with my teammates to change the course of this season. I will do everything to make it happen," Ibrahimovic said.

Ibrahimovic was born to Bosnian-Croatian parents in the Swedish city of Malmo in 1981. He played for top clubs all over Europe, including Ajax, Manchester United, Barcelona, Juventus and Paris St Germain. The striker's last club was LA Galaxy in the US.

He recently angered fans in his home city by purchasing a stake in Stockholm-based Hammarby, one of FF Malmo's rivals. Unknown vandals repeatedly attacked Ibrahimovic's statue outside Malmo's stadium, cutting off its nose, spray-painting it, and branding him "Judas."