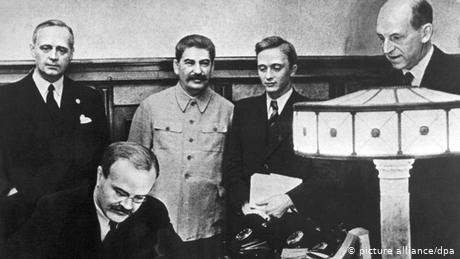 Warsaw and Moscow have been trading verbal blows about the 1939 non-aggression pact between Nazi Germany and the Soviet Union.

"[W]e are ready to explain to Russian diplomats historical facts for as long as it will take for them to understand that the world will never forget the true meaning of the Ribbentrop-Molotov Pact," Polish Vice-minister of Foreign Affairs, Marcin Przydacz, said on Twitter on Saturday.

The latest escalation comes after the European Parliament passed a resolution on the pact, saying the accord "paved the way for the outbreak of World War II," and describing it as a deal "between the two totalitarian regimes."

Moscow has long insisted that the pact, named after German Foreign Minister Joachim von Ribbentrop and his Soviet counterpart Vyacheslav Molotov, was a necessary evil to delay the Nazi invasion. Modern Russia also strongly resents attempts to equalize Nazi Germany and the Stalin-led Soviet Union, whose troops caused well over half of Germany's military losses and also paid the highest price to defeat the Nazi war machine.

Earlier this month, Russian President Vladimir Putin said the EU Parliament resolution was "not based on anything real."

"They are very nearly blaming the Soviet Union, alongside Nazi Germany, for causing the Second World War," Putin said.

This week, Putin restated his criticism while addressing Russia's top military brass, pointing out that western Allies appeased the Hitler regime before the Molotov-Ribbentrop pact. He said that this stance, illustrated by the acceptance of German annexation of Czechoslovakia in 1938, was also to blame for the conflict and for the Soviet Union's decision to sign the non-aggression pact.

Putin also focused his criticism on Poland's ambassador to Berlin during the pre-war years, describing him as a "bastard" and "an anti-Semitic pig." The Russian president cited the ambassador's diaries as evidence that the diplomat had promised to build a statue of Adolf Hitler to thank him for removing Jews from the country.

"He expressed full solidarity with Hitler in his anti-Semitic views," Putin said.

The head of Russian parliament, Vyacheslav Volodin, also angered Warsaw by saying that Polish authorities at the time "practically showed solidarity… with fascist Germany," and that the current Polish government should apologize for it.

The Russian envoy has already stirred controversy in Poland — in 2015, he said that Warsaw "bears partial responsibility" for the events in 1939. He also claimed that the Soviet invasion of Poland which followed the Nazi attack was of a defensive nature to "ensure the safety of the USSR."