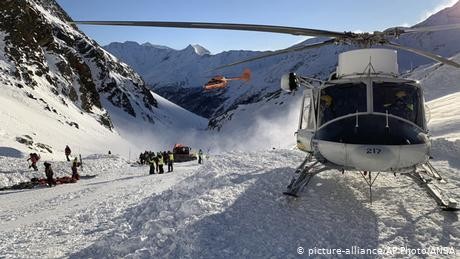 An avalanche that hit a ski slope in the Italian Alps killed three people on Saturday, Italian officials said.

The incident took place at the Val Senales glacier, in the Italian province of South Tyrol.

The victims, who were German nationals, include a 35-year-old woman and a 7-year-old girl, both of whom were found by rescuers but could not be revived.

Another girl, who was also believed to be 7 years old, was taken to the hospital in a helicopter but later succumbed to her injuries, Italian news agency ANSA reported.

The German foreign office confirmed the nationalities of the victims.

A German man and his 11-year-old son were pulled out of the snow and revived.

The avalanche struck at midday, and was 200 meters wide and 1 kilometer long.

A team of 70 emergency workers took part in the rescue operation, along with three helicopters. There were no immediate reports of missing skiers.

The risk of avalanches in the area has been high, with other avalanche accidents reported in Switzerland and Austria in recent days.

In Austria, a young skier survived being buried beneath an avalanche for five hours, before rescuers were able to locate him on Thursday.